You Make The Call: Jesse James touchdown or no touchdown? | Steel City Underground

You Make The Call is a weekly feature from Steel City Underground which will challenge fans to examine officiating call(s) made in the previous Pittsburgh Steelers game. The goal is not to whine about calls, as we cannot change them long after the fact! Instead, this column is an opportunity to open discussion where fans can debate on and better educate themselves about the rules of the game.

Bear with me folks: this has been debated to death today, but maybe not in the same way as I'm about to do.

Let me start this week's "You Make The Call" by stating that officiating is a thankless job. You're never going to make everyone happy and in most cases, you're going to make at least half of the people on the field upset.

During Sunday's Pittsburgh Steelers and New England Patriots game, there's a good chance that referee Tony Corrente and his crew upset more than half of the people watching the game, when they overturned a touchdown called as such on the field.

Without the use of slow-motion instant replay, the effort put forth by Steelers TE Jesse James appears to be a touchdown. Even the TV announcers couldn't figure out why it was taking so long to review the play. 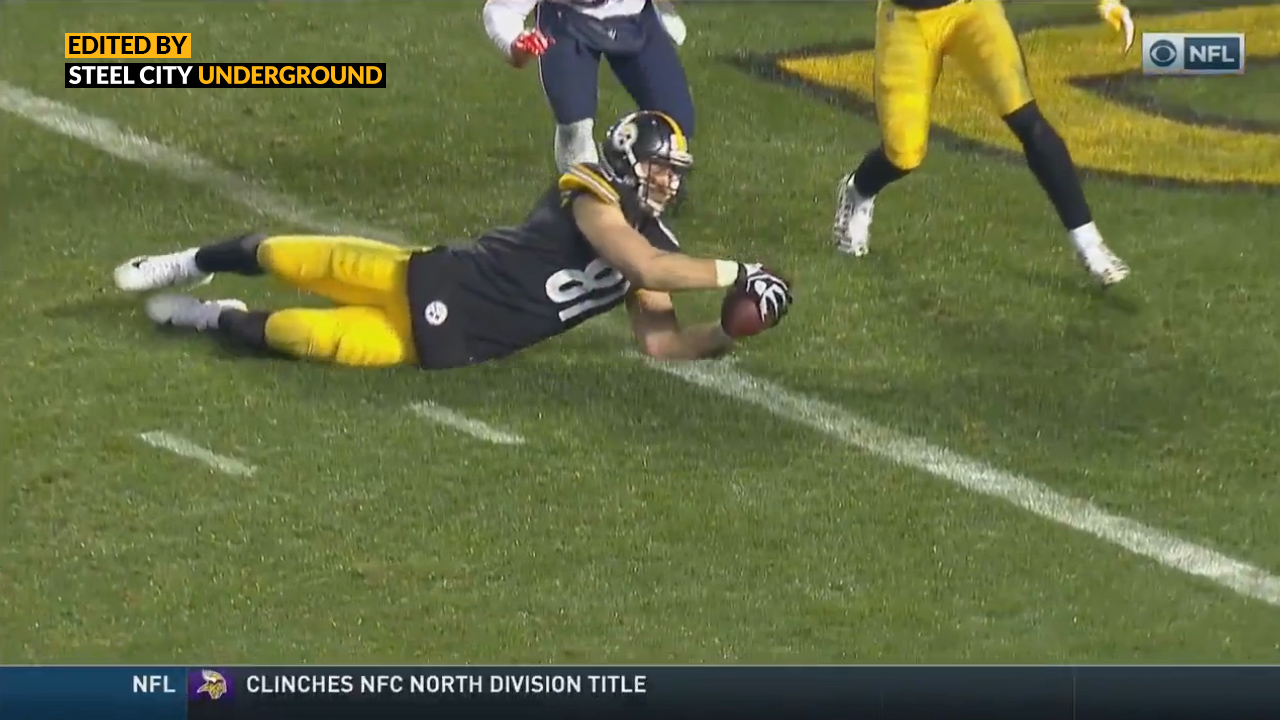 It's now time to go down the deep, black rabbit hole that is trying to define what a call will be on any given Sunday. Let's start first with the definition for a touchdown from the NFL Rule Book.

A touchdown is scored when:

(a) the ball is on, above, or behind the plane of the opponents’ goal line (extended) and is in possession of a runner who has advanced from the field of play into the end zone

(b) a ball in possession of an airborne runner is on, above, or behind the plane of the goal line, and some part of the ball passed over or inside the pylon

(c) a ball in player possession touches the pylon, provided that, after contact by an opponent, no part of the player’s body, except his hands or feet, struck the ground before the ball touched the pylon

(d) any player who is legally inbounds catches or recovers a loose ball (3-2-4) that is on, above, or behind the opponent’s goal line

(1) The ball is automatically dead when it is in legal possession of a player and is on, above, or behind the opponent’s goal line.

(2) If a player attempts to catch a pass, the ball is not dead, and a touchdown is not scored, until the receiver completes the catch. See 3-2-7.

One of the sticking points (3-2-7) in the overturned call, as further described below, is that James is not considered a "runner" by definition since he is "going to the ground". There is another set of criteria which was then put into motion:

A player who goes to the ground in the process of attempting to secure possession of a loose ball (with or without contact by an opponent) must maintain control of the ball until after his initial contact with the ground, whether in the field of play or the end zone.

If he loses control of the ball, and the ball touches the ground before he regains control, there is no possession.

If he regains control prior to the ball touching the ground, it is a catch, interception, or recovery.

A player is considered to be going to the ground if he does not remain upright long enough to demonstrate that he is clearly a runner.

Here's the starting point. I believe we can all agree that James is not a "runner" by definition, however, he makes more than one "initial contact with the ground" before completely coming all the way down in the endzone.

Now, here's where it gets tricky and the rules start to trip over themselves. All scoring plays are subject to video review. The NFL rules are very specific as to what video review can and cannot do:

A decision will be reversed only when there is clear and obvious visual evidence available that warrants the change.

This is where this lies on you, the reader. Does this look like "clear and obvious visual evidence" that the ball is ever out of James possession and/or hits the ground? 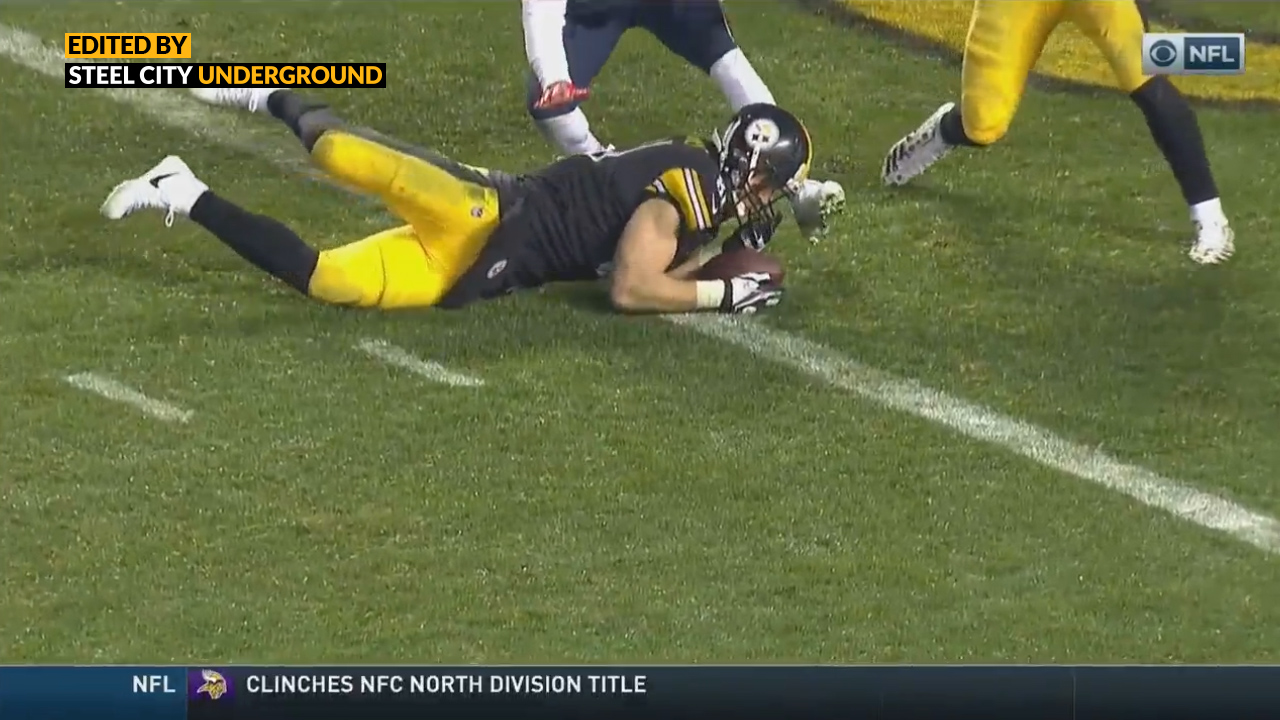 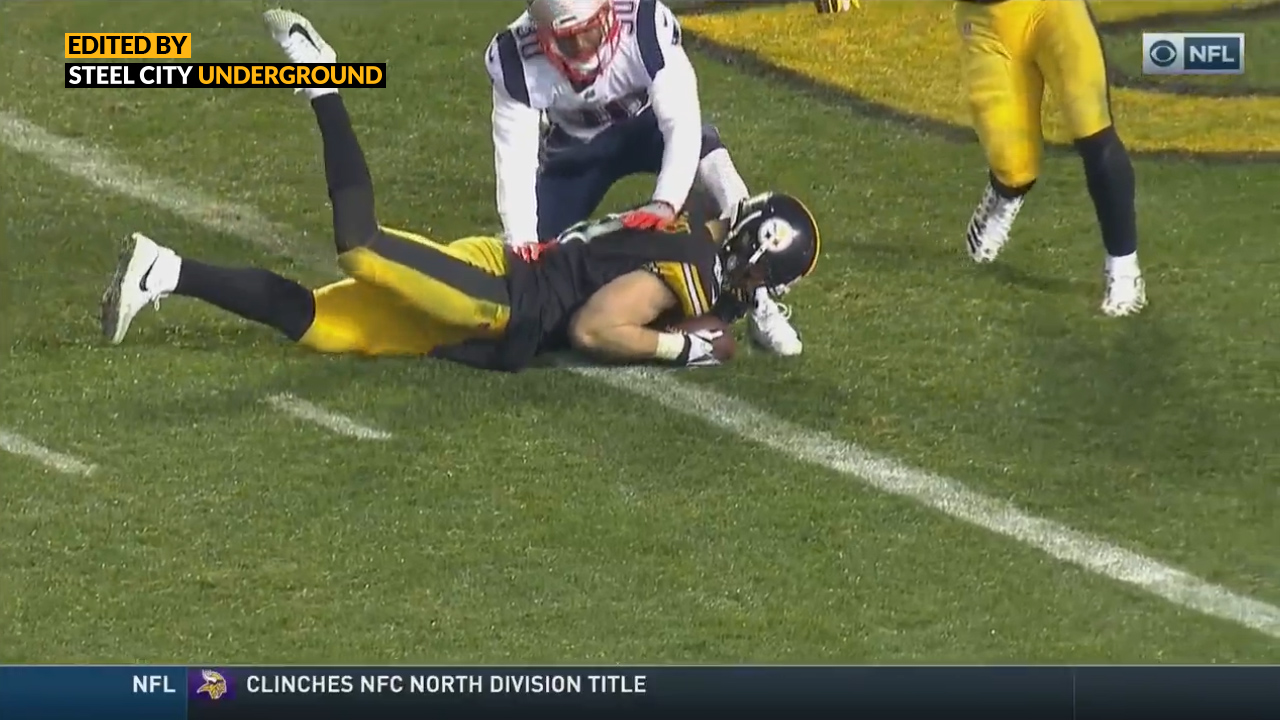 Rather than wait for the comments before making my own, I'll share that I don't believe there is any credible evidence to overturn the call on the field as-is. Does the ball move? Does it move after James' knee hits the ground? Does it move as his left elbow hits?

Watching again, you'll notice James has control of the ball as soon as he hits the ground (knee) but the ball comes slightly loose when his left elbow strikes beyond the plane of the goal line. This is the tough part for football fans and casual observers, as we've been taught such things as "the ball is dead once it breaks the plane of the end zone" and "the ground cannot cause a fumble". The definitions truly lie in "football move" and "runner" as James may not be considered either since he is not upright long enough.

Following the game, referee Tony Corrente was interviewed. When asked about the play, he mentions "surviving the ground" and clearly becomes defensive when asked to clarify the rule used to overturn the touchdown.

Furthermore, the NFL officially released a statement, in what felt like record time, following the game:

The video is an explanation from @NFL SVP of Officiating Al Riveron on the reversal at the end of the #NEvsPIT game. pic.twitter.com/hm5EeoZTER

Armed with knowledge of the rules above, Riveron's explanation is difficult to take at face value. Furthermore, he begins the video by stating "Roethlisberger completes a pass to James" but then talks about "completing the catch".

Which is it Alberto?

That question may seem snarky, but it's the heart of the conversation this morning. Remove conclusive video review from the equation and say it is in fact, indisputable. The next question becomes, is it consistent with similar calls made in the past?

I had put some of those calls up on social media over the last 24 hours, starting with a game Riveron was the official on back in 2013.

In this clip, can you say Heath Miller is a runner by definition? Part of the problem here is, he merely pivots and extends toward the goal line. Much like James, Miller pulls the ball close to his chest before turning to fully lay out toward the pylon.

Miller loses the ball after hitting the pylon, and the call on the field is a touchdown.

To gain possession of a loose ball that has been caught, intercepted, or recovered, a player must have complete control of the ball and have both feet or any other part of his body, other than his hands, completely on the ground inbounds, and then maintain control of the ball long enough to become a runner.

A player has the ball long enough to clearly become a runner when, after his second foot is on the ground, he is capable of avoiding or warding off impending contact of an opponent, tucking the ball away, turning up field, or taking additional steps. If the player loses the ball while simultaneously touching both feet or any other part of his body to the ground, there is no possession. This rule applies in the field of play and in the end zone.

Honestly, this is where I struggle with the difference. Jesse James has a shorter distance to go to the goal line than Heath Miller did. James clearly makes a move to ward off a defender, as he turns and twists to attempt to score (the whole objective of the game of football).

It may not be the best situation to paint the picture I'm attempting to state, but watch the football the entire way with Miller and you will see a very similar scenario with that of James. For a clearer play that was also ruled a touchdown, we can look at this catch by Steelers TE Xavier Grimble.

In this play, Grimble gets a hand on the ground before scooting his foot forward for a second movement. Is this much different than James putting a knee (rather than a foot) and his elbow (rather than his hand) to the floor in an attempt to cross the goal line?

That may even be of less debate than this call which also favored the Patriots in a Week 3, last-second victory over the Houston Texans.

This play is the one that makes it incredibly difficult to defend the official decision from last night's game. Patriots WR Brandin Cooks gets both feet down inbounds, but then loses control of the ball as it goes to the ground. It starts to move down his belly and also appears to touch the ground as he's securing it.

Without question, however, the ball does in fact move and also touches the ground. The video evidence here was not enough to overturn the call on the field, which should've been the case with James' would-be touchdown Sunday night.

So now I ask everyone: was Jesse James and the Steelers denied a touchdown? Do you have further evidence to support your claim?

I can't wait to read your comments below!

With the Pro Bowl right around the corner it’s time to take a look at which Steelers stood out and ...

Steelers Throwback Thursday: Two of the best NFL safeties may enter Hall of Fame together

Which soon-to-be Steelers free agents are a top priority to the team?

After a short hiatus, Joe Kuzma rejoins Brian E. Roach to discuss the Steelers impending free agents: both restricted and ...

Following up on the previous episode of the SCU podcast, Brian and Zach team up again to make their “way ...

Where should the Steelers focus their limited draft capital in 2020?

Brian is joined by the “Professor of Football” Zach Metkler as the duo turn their sights on the NFL Draft ...

Hot off the heels of the NCAA Football’s National Championship game, Steelers Nation is already asking questions about a potential ...