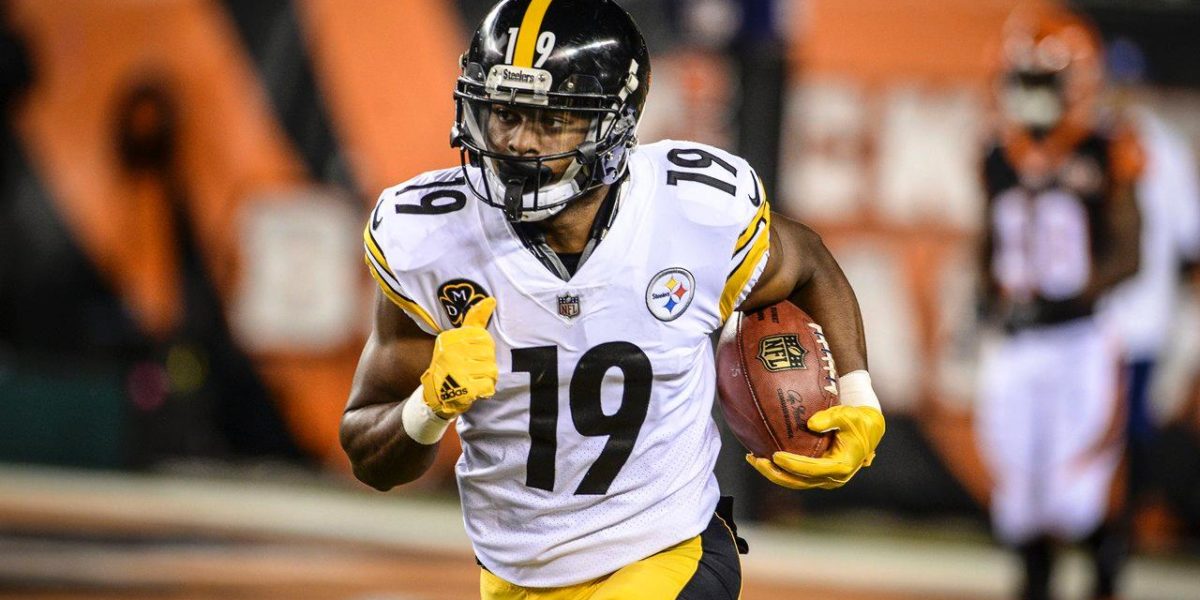 PFF: JuJu Smith-Schuster has best season of any rookie receiver in last decade

When the Pittsburgh Steelers selected USC WR JuJu Smith-Schuster in the second round of the 2017 NFL Draft, most fans reacted with angst. They couldn’t understand why the team, who may have had other pressing needs (cough, cough, cornerback) went after another offensive weapon.

Here’s a team whose roster was stacked with depth: Antonio Brown, Martavis Bryant (who was still awaiting full reinstatement by the league), Eli Rogers, Sammie Coates, Cobi Hamilton, Demarcus Ayers, and Darrius Heyward-Bey had all been starters at one time with the team. The Steelers also signed Justin Hunter in the offseason.

So why another receiver? And why pick with such a high draft pick? They already have eight potential starters on the depth chart, when most NFL teams only roster a maximum of five or six!

What a waste… this guy won’t play… insert some other negative comment that Steelers Nation had on their minds following the draft.

Now, fast-forward to present day. We know the story of Smith-Schuster, the youngest player in the league last season, who didn’t even have his driver’s license (and had the bike he rode everywhere stolen). The fun-loving “kid” who appeared to make the game equally fun for the existing regime with his wild scoring celebrations.

JuJu became one of the most beloved players in Pittsburgh history seemingly overnight, but it didn’t just happen because of flashy style points following touchdowns: he had one of the most eye-opening rookie receiving seasons in recent memory. Not only with the Steelers, but of anyone taken in last year’s draft.

32 wide receivers in total were drafted last season, with five being selected before JuJu. Those players, listed below, didn’t crack the same kind of production as the USC product who was passed over 61 times before having his name called by the Steelers with the 62nd overall pick.

As is becoming commonplace, it appears the Steelers got another “steal” by getting Smith-Schuster:

Of the receivers taken in last year’s draft, Smith-Schuster decimated nearly everyone’s numbers. That may not be entirely seen here, as only one rookie receiver, LA’s Cooper Kupp, had more receptions (62). However, Smith-Schuster still had more touchdowns and more receiving yards, as well as the longest play from scrimmage.

And unlike his peers, he didn’t fumble the football either.

His consistency was such that Pro Football Focus recently wrote about Smith-Schuster, detailing how their grading system ranked him as having the best rookie receiving season since 2007.

If that isn’t impressive, there’s even more to add to the accolades. When comparing Smith-Schuster’s rookie campaign to those receivers listed by PFF, his numbers stack up accordingly.

Just sticking to holding onto the football for a second, I found it impressive that of the seven players listed, JuJu was only one of two (the other being Jordan Matthews) who didn’t lose the football over the course of their first season.

Digging into other details, some perspective must be placed on JuJu’s statistics versus that of the other players. Smith-Schuster played alongside Antonio Brown and Le’Veon Bell last season: those two athletes caught 101 and 85 passes respectively out of 269 combined targets.

That explains why JuJu’s reception total is the second-lowest of the group, despite having the lowest targets overall. By comparison, Odell Beckham was targeted a team-high 130 times his rookie season as the team’s primary receiver. Ditto for Michael Thomas who became the Saints WR1 in 2016 with 92 catches on a team-high 121 targets (surpassing Brandin Cooks‘ 117 and Willie Snead‘s 104).

During his rookie year, the Chargers’ Keenan Allen was the second-most targeted player on the team behind Antonio Gates, as was the then Eagle Jordan Matthews, whose 103 targets were 40 less than teammate Jeremy Maclin.

The most comparable of the players displayed is Atlanta’s Julio Jones, who played with Roddy White and Tony Gonzalez during his first NFL season. Though Julio put up solid numbers, his catch percentage was by far the worst of the group securing only 54 of his 95 targets: he finished his rookie season with only 42 yards more than Smith-Schuster despite starting all 13 games in 2011.

That’s why PFF’s Scott Barrett was wise to point out JuJu’s ascension in his first season. He out-produced a receiver (Martavis Bryant) who was thought to return and put up huge numbers and did so while a teammate (Brown) was closing in on making a case for the league’s MVP award (before AB lost the rest of his season due to injury).

Often it’s hard to take PFF’s grades at face value, but when all factors are considered, you have to agree that the future is mighty bright for a player who was first unwanted, then embraced, by Steelers Nation.