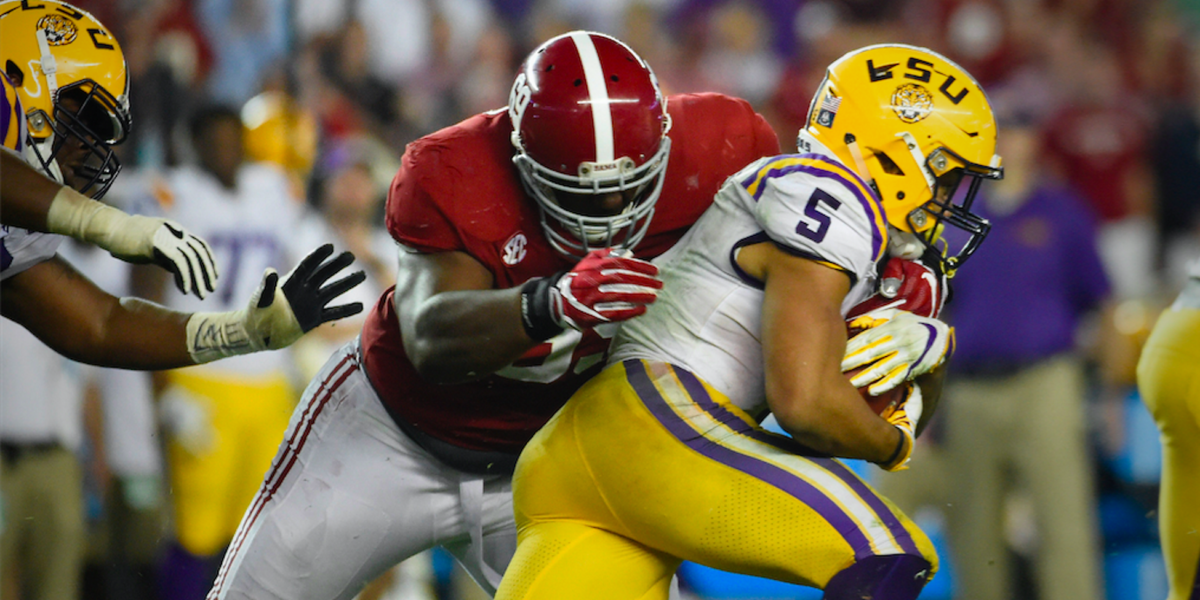 Steelers round out 2018 Draft with defensive lineman, Joshua Frazier

With their final pick in the 2018 NFL Draft, at No. 246 overall, the Pittsburgh Steelers rounded out their newest class by selecting defensive tackle Joshua Frazier of Alabama. The addition of Frazier gives the Steelers depth along their defensive interior.

“He was a five-star kid out of Arkansas and he played a lot his freshman year until he got hurt his second year,” said defensive line coach Karl Dunbar on Saturday, “and that’s when Da’Ron Payne came in and took over that job. Dunbar is intimately familiar with Frazier’s ability as he was the defensive line coach at Alabama during the career of both Frazier and Payne. “Frazier didn’t start many games because of, you know, Jonathan Allen, Da’Ron Payne, [Jarran] Reed, [Cam] Robinson, Da’Shawn Hand, Isaiah Buggs… it will be fun coaching him again.”

Had Frazier gone to a different college, his career could have gone very differently. Alabama is a highly-coveted program and often highly-ranked high school players get a taste early of what potential professional play is like. The expectation to perform and fight for the spot on the depth chart is a daily requirement. The Crimson Tide build a program that is deep enough that they have someone that can’t wait to get that coveted starting spot.

Frazier, a 6’3″, 321 lb., nose tackle experienced that despite being a five-star recruit from Har-Ber High School in Springdale, Arkansas. He was ranked as the No. 1 player in Arkansas (at any position), the No. 4 defensive tackle and No. 79 overall player during the 2014 recruiting cycle according to 247Sports Composite rankings. He was mainly a reserve player in his first two seasons, sidelined for most of 2015 due to the injury, and then worked his way back during the 2016 season to see action in 14 games, recording eight tackles, a sack and one tackle for a loss.

During his senior season (2017), Frazier played in every game, recording 15 tackles (2.5 for a loss). He added one forced fumble, three pass breakups, and one quarterback hurry.

“With Frazier’s size and strength, he likely would have found much more playing time in had he gone to Arkansas,” NFL.com’s Lance Zierlein said in his draft prospect analysis. “Frazier has the mass and anchor to appeal to teams looking for competition as a run-clogger, but his lack of initial quickness, tackle range and upper body twitch makes him a longshot to become a factor in the NFL.”

With Dan McCullers‘ spot in question after disappointing progress, the Steelers now have Frazier as, at the minimum, a project player. Depth at this position became apparent during the 2017 NFL season when veteran Cameron Heyward was injured. The Steelers struggled with stopping the run and required a rotation of personnel, including sliding defensive ends Tyson Alualu and L.T. Walton around to solidify their defensive front. Dunbar seems convinced that he can get more from Frazier at the next level and will put that theory to the test this Spring at rookie minicamp, OTAs and training camp. Expect the Steelers to add more depth through rookie free agency as well.