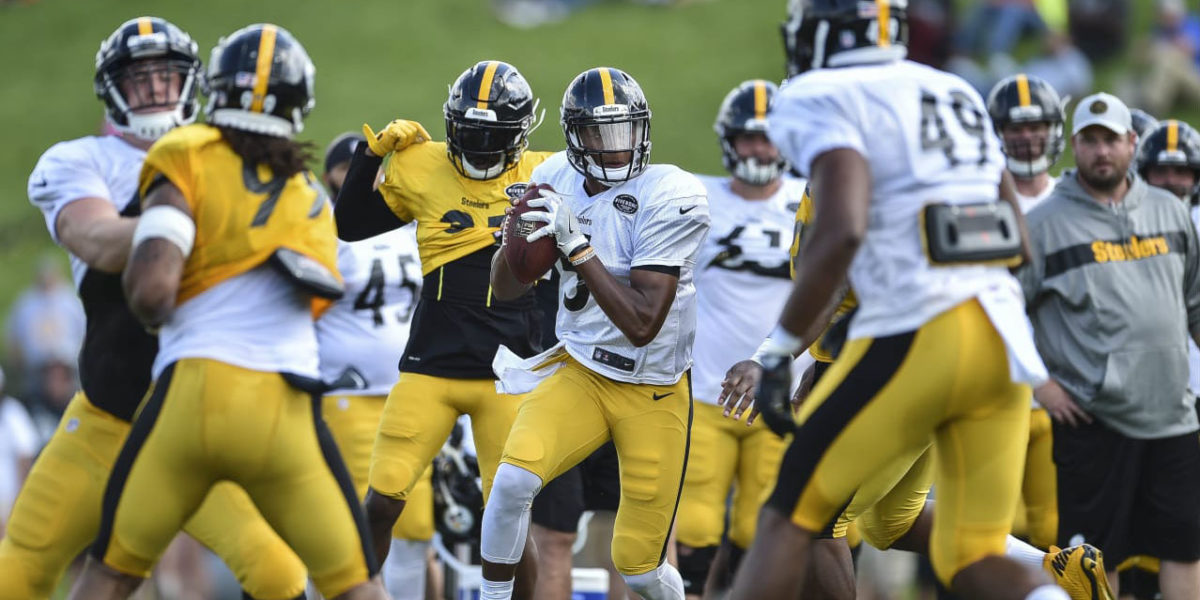 by Eric Herrmann (SteelersGrind) on August 2, 2018

With training camp finally, here, it’s time to look at some roster spot battles that will be happening on the Steelers roster. While there will be plenty of battles for starting spots, I wanted to take a look at the players who will be fighting for a spot on the 53-man roster.

Here are some training camp battles to watch on the offensive side of the ball.

Maybe the most prolific roster spot battle at camp, it’s hard to tell how this battle is going to go. Many fans are tired of Landry Jones and would rather roll with Dobbs, the newer and more athletic option. However, there’s no denying that Jones has more experience and familiarity with the offense. He’s proven that he can come in and keep the team competitive even when Roethlisberger is out.

Given that the Steelers already have a development quarterback in Mason Rudolph, it would make sense to keep the veteran back-up. If Ben Roethlisberger goes down, you want to have a back-up with experience ready to go. Dobbs has potential, but that alone won’t be enough. If Dobbs balls out during the preseason this battle could get interesting, but the odds are not in his favor.

It’s possible that both of these wide receivers could make the roster but given their similar profiles, I could see only one of them making the final cut. Heyward-Bey brings veteran leadership, special teams ability, and is capable of the occasional play on offense. With him, you know what you’re getting. He will give 100% as a special teamer, be a leader in the locker room, and probably have one big, random rushing touchdown.

Hunter, on the other hand, doesn’t have the special teams prowess. He does though have greater upside as a wide receiver, especially as a red zone threat. The winner could simply come down to the role the team values more and given that whichever plays make the roster likely won’t see the field as a wide receiver, the player with the most versatility may come out victorious.

I’m writing this with the assumption that the Steelers keep six wide receivers and that Eli Rogers is a roster lock. Similarly, to the previous battle, these are two players with similar skill sets.  Tucker is entering his third year as a Steeler. He flashed his talent last year in the preseason and many are calling him a dark horse to make the roster.

Competing with him is rookie Quadree Henderson. Tucker is surely the more polished receiver, but what sets apart Henderson is his ability as a punt returner. The Steelers have been trying to replace Antonio Brown as the team’s punt returner, so don’t take the teams focus on filling this role lightly. If Henderson’s dynamic return ability can successfully translate to the pro’s, then he may be able to earn himself a spot on the roster.