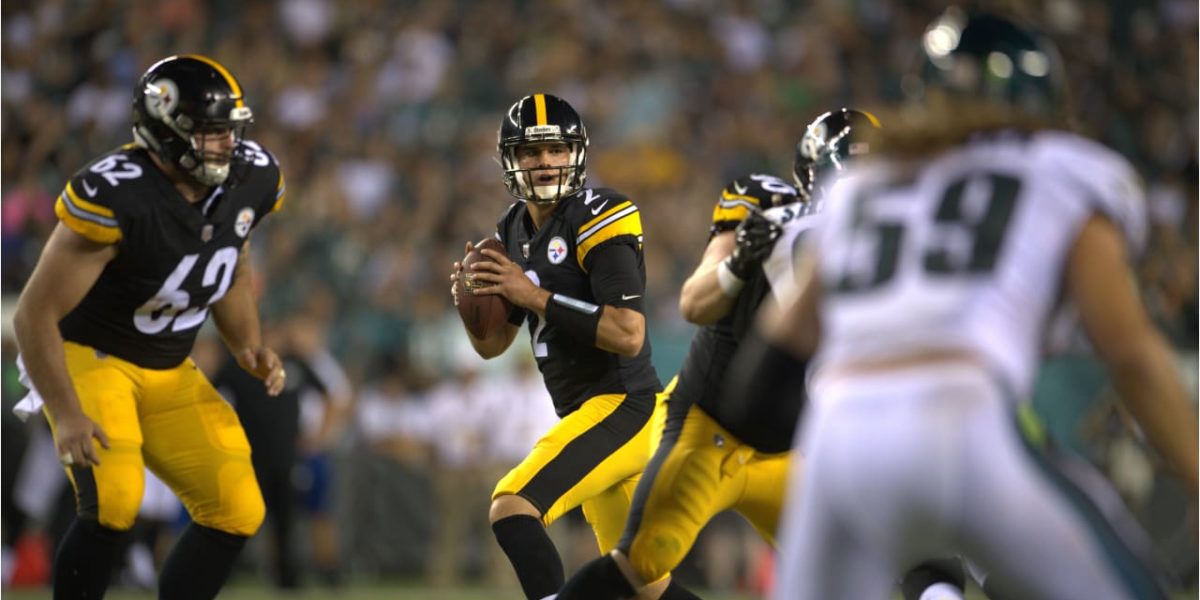 The Steelers should try something unconventional: and keep 4 quarterbacks

On occasion, teams only keep two of these players, often the second one isn’t even that good. I’m not talking about the guys who kick the ball, but the ones who throw them. For many years, the Patriots, under Bill Belichick only kept two quarterbacks, feeling having a third was unnecessary and a waste of a roster spot.

The teams that do have a third string quarterback typically have a guy that really doesn’t belong there but he’s kept out of fear of an injury occurrence.

The Steelers typically keep three, with a fourth, “camp QB” during the summer who is let go before the season starts. This summer, there is no camp QB in Latrobe. There is no obvious cut on that unit, yet someone must go…or perhaps not?

Landry Jones is the incumbent, the most experienced and in my opinion, despite popular belief, one of the better backups in the league. He has had some success and he is a legitimate number two starter who can fill in for Ben Roethlisberger for a game or two if needed.

Mason Rudolph, the rookie, isn’t going anywhere. He’s been dubbed the future of the franchise, the next Big Ben, the guy who will win Lombardi number eight for this town (after Ben gets number seven).

And all of those thoughts and expectations are warranted.

I do think he’s the future starter and can lead this team to many wins down the line. In part due to the fact that he already has a built-in number one target in James Washington with whom he’s worked with for years at Oklahoma State.

When talking about playing with him in their first NFL preseason game, Rudolph noted

And it should. Rudolph is good and to have a security blanket already built-in for him, only enhances his growth. Rudolph was able to draw the Eagles offside in his first ever NFL action and complete a pass to Washington, stating:

That’s a play where you want to push it down field, you don’t want to take anything short. I felt like he had the best feel for that play.

Rudolph has already exhibited great football IQ and couple that with his long-time target at OSU and you have a dynamic duo in the making, a la Roethlisberger, and Antonio Brown. But Rudolph didn’t stop there, he stated how much “slower the game is” than college when it’s all “up-tempo”. His no-huddle, Big 12 style of play may help him adjust to the pros quicker than some may think. He speaks like a leader too.

After his first game experience, he credits his teammates, stating:

The offensive line did a great job, our backs did great.

He has a place on this roster that is beyond a backup, but for now, he’ll sit and learn behind Roethlisberger, Jones and/or Josh Dobbs.

Dobbs has a real case to be here too. The dilemma is strong. Do the Steelers trade Dobbs to another team in need of a backup? Do they keep him over Jones or do they keep him along with Jones to make it a room of four? Roethlisberger won’t be here forever, so the idea of keeping all four of these guys may seem outrageous, but it’s not really when you think about the future.

I want to make the case to keep all four

Dobbs has a rocket for an arm, he’s petty accurate, he’s fast, he can scramble and has big play ability. He’s also been in the organization for a year already and the Steelers spent a fourth-round pick on him. I don’t think they should throw any of that away for the sake of being ‘conventional’.

Dobbs is mature, he’s highly intelligent (see my article from this time last year) and he’s understanding of what he needs to do to get better. Speaking of the first pre-season game, Dobbs stated:

I think it was a good day. Always room to improve. We’re going to continue to get better today on the (practice) field.

He knows his work isn’t done. He knows he must show his best self each and every time out and he’s not one for accolades but one for getting the job done. There’s always room on a roster for a guy like that. Setting an example, especially from the quarterback position is necessary and Dobbs sets one daily.

Speaking about his scoring drive against the Eagles, he too praises his teammates by stating:

We were trying to take a shot after we got a turnover. So then as an offense, it was cool to see guys continue to rally, come down the field and lead an efficient drive before the half.

I had great protection throughout the entire drive. The line gave me great time.” He continues on by saying “some spectacular plays on third down to keep the drive going. It was a good team drive as an offense.

The future after Roethlisberger looks bright with Rudolph as the starter, but there is no reason that Landry Jones and Josh Dobbs shouldn’t be a part of that group of quarterbacks in the post Big Ben era either.

We don’t know when Ben will ride off into the sunset, that’s his decision, as well as it should be. Until then, I see no harm in getting creative to ensure the QB position that is so solid now, stays that way after the hall of famer calls it a career.

Here’s to being unconventional.

2 responses to “The Steelers should try something unconventional: and keep 4 quarterbacks”