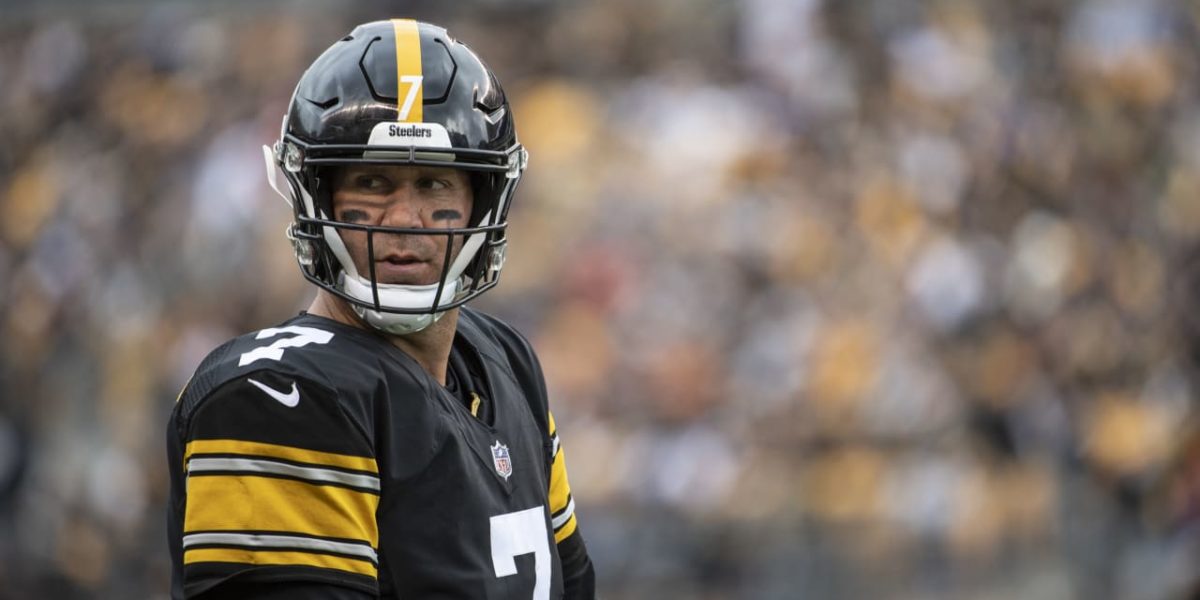 I’d like to start with saying our thoughts, love, and prayers go to all of the victims of yesterday’s senseless shooting in Squirrel Hill especially from me and family to Michele [Rosenthal]. We love you Michele and we are thinking about you.

What clicked in that drive after the missed field goal? Six plays 69 yards

Awesome. Proud of him. It was so much fun to watch him go to work and be successful and hear the crowd love on him.

Have you always wanted to run sneaks?

Yea it was awesome. I am averaging three a carry.

Why are you doing it this year?

It got called. I do what the coach calls.

Todd Haley made a remark last week was that in your mind?

No, I didn’t hear what he said truthfully.

He was joking saying have fun doing quarterback sneaks.

We were pretty successful today.

The drive after the special team’s flaw was there an inspiration to make up for that?

There was emotion because that was a roller coaster. We got a safety, the place is going nuts, we’re all excited, momentum changes, then that happens then it’s like what’s going on. How did we allow that to happen? They scored a touchdown or whatever they did, and it was like listen offense, that was on us, let’s go take care of this and go down and put some points on the board. We take pride in answering when the other teams score. That is one of the things we always say, if the other team scores then we need to answer, and we did that a couple times today.

What can you say to the people of Pittsburgh to comfort them at a hard time?

Doesn’t surprise me. I know the Boston strong thing, but it’s true everywhere and that is what Pittsburgher’s are, we’re family. I listen to some of the national reports of people explaining to the national people what Pittsburgh is and they described it as big small city or whatever you want to call it. It doesn’t surprise me, there is so much love here in this town for the sports, for each other, for all the different races, ethnicities, religions, everything we have here, such a melting pot, this city. For this to happen, it brought tears to my eyes last night and during that moment of silence pregame, same thing, because we all just need to love each other and put our faith in the lord that we will get this fixed.

How did it feel on your drive in and warming up?

It was tough. It was crazy tough and especially of Michele and the closeness that we have with her. It’s hard, coach always talked about when you step inside the white lines everything else has to kind of go away but sometimes its’ always said than done. I told the guys during the post team prayer, I said we’re thankful for a victory, but we also understand there are bigger things, there is life. I am glad we can give people maybe three hours of a brake of not thinking about it all the time. That is what sports dose sometimes, it helps you to heal. It’s over, people are going to enjoy this, but reality still sets in for a lot of people.

How did Antonio Brown win on the first touchdown?

Scramble, it was a broken play, but the line gave me all kinds of time and stepped up. A.B. [Antonio Brown] probably needs one of those trackers on that has the line, I’m sure he was all over the field and then I don’t think the guy expected him to take off. I kind of saw him and threw it out there for him.

Didn’t it look like Justin Hunter was ready or is that the initial play for you?

Honesty, I don’t remember truthfully. I’d have to tell you on Wednesday.

Do you put in any thought when you see a new quarterback on the Browns?

Do you think getting off to a fast start is an issue?

No, well we had penalties today. We had a first down, got a penalty, and you get behind the chains, so I don’t think there was any rhyme or reason today. I just think it was one of those, we shot ourselves in the foot. Give them credit for it.

You are 8-0 in last eight games when Antonio Brown has a 40-yard completion, thoughts on that?

Really? So, let’s throw it deep every single play and see what happens.

Re: You seemed to really improve on the picks with the receivers

Well that’s a play we put in the playbook a few weeks ago. We got it from another NFL team that likes to do that play so it worked. JuJu [Smith-Schuster] caught it in Cincinnati for a two point and then A.B. [Antonio Brown] caught it this time. Same play.

It wasn’t similar to the one A.B. [Antonio Brown] scored?

Nope. Completely different, it’s almost like a screen in a way.

Your receivers used to be terrible at rub routes right about ten to five years ago?

Was [Hines Ward] good at it?

Yea. I think the rules kind of dictate what you can and cannot do nowadays. Be an actor not a tractor.

With James Conner’s performance does it make you absorb the loss of Le’Veon Bell easier?

Where is this team at right now?

We just finished a game. What is our record, 4-2-1. Just trying to win one football game at a time. We are not looking forward to anything. We are going to going to enjoy this one then get ready for a big one next week. Doesn’t get any easier.