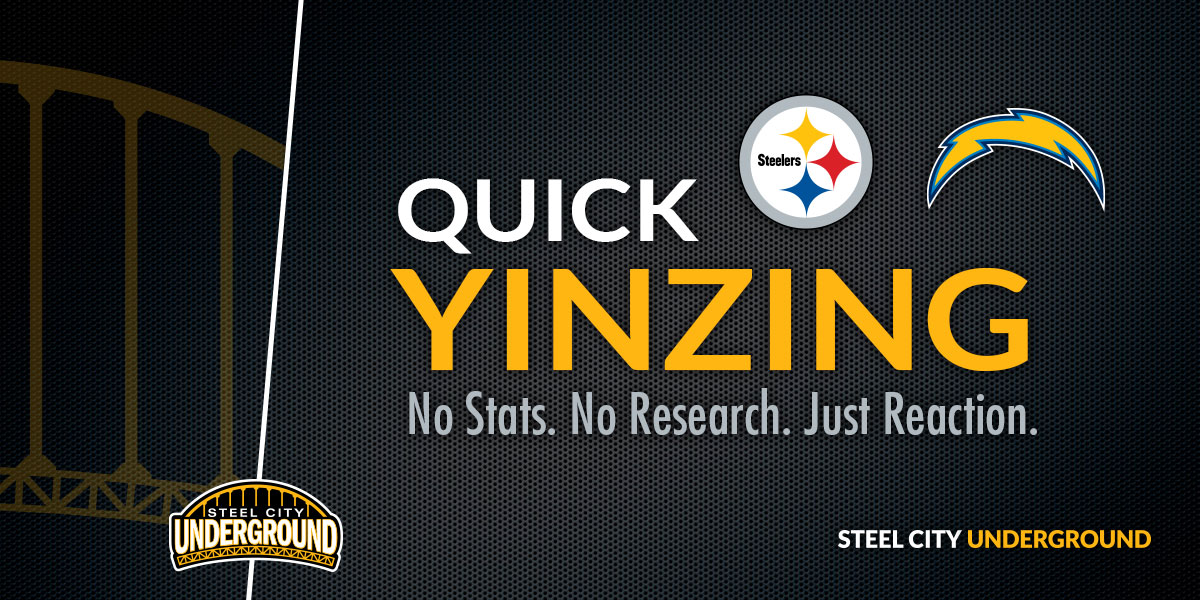 Playing host at Heinz Field, the Pittsburgh Steelers went head-to-head with the Los Angeles Chargers in a primetime night game that started off with a lot of energy in Pittsburgh’s favor and then turned into as bizarre of a contest as many NFL games across the league became in Week 13. Late in the final quarter, both teams were tied 30-30 and battling for the win. It came down to the Chargers counting on a field goal in the final seconds. After the Steelers were called off-sides, Artie Burns blocked the second attempt but was off-sides. The third kick, despite a third off-sides penalty, went through the uprights to give the Chargers the 33-30 win.

The Steelers got off to a hot start after deferring the winning coin toss to allow their defense to take the field first. They were able to force the Chargers offense into a long field goal situation and Michael Badgley didn’t have enough leg to get the ball through the uprights. That got Ben Roethlisberger and company on the field quickly. Roethlisberger would hit Antonio Brown, who Casey Hayward could not cover, on a 46-yarder to set up the first of two rushing touchdowns on the night for James Conner. Steelers up 7-0

After the Steelers defense would force the Chargers to punt on the next series, Roethlisberger took little time getting the offense down the field. With great blocking by Roosevelt Nix and Chukwuma Okorafor reporting as eligible, Conner would scamper into the end zone to put Pittsburgh ahead 13-7 after Chris Boswell barely missed the PAT off the left upright.

With a little help from the officiating crew (as our own Brian Roach would say, ‘the refs suck’), Philip Rivers would benefit on the next series by a false start by his own offensive line and as the Steelers defenders stopped mid-play, hit Travis Benjamin for the touchdown. No penalty flag was thrown, making the play unreviewable.

Antonio Brown had a nice game and grabbed one touchdown pass for 28 yards.

All game long the Steelers offensive line gave Roethlisberger all the time in the world and showed some really good pop in pass blocking, especially Matt Feiler. Showing how tight-knit they are as a group, the o-line also showed versatility in pulling to open up rushing lanes for Conner. If anyone doubts that Mike MunchakMat has this group at the top of their game, they need to go watch the game film because Pittsburgh wasn’t letting the Chargers shove them around up front.

Cameron Heyward, Stephon Tuitt, and Javon Hargrave proved their value up front defensively, keeping Los Angeles from being able to put together much of a run game in the first half. Hargrave would earn 1.0 sacks and become the first nose tackle in Steelers history to earn more than 6.0 sacks in a single season. Tuitt also earned a batted ball.

One of the bright spots on defense was the play of L.J. Fort. Fort was aggressive and successfully blocked a Donnie Jones punt that set up a Boswell field goal.

Despite strong play by both the Steelers offense and defense, things broke down after Chargers receiver Keenan Allen was able to grab a deflected near-interception in the end zone for a touchdown, Desmond King returned a punt for a touchdown (despite a missed block in the back call that would have gone against Los Angeles), and a big hit by Terrell Edmunds that popped the ball out of the Chargers receiver’s hands was ruled an incomplete pass rather than a potential fumble (Edmunds would earn his first NFL sack on another play). Chargers running back Justin Jackson broke a nice run for a late touchdown.

The Steelers took the field late in the fourth quarter and looked to tie things up. Roethlisberger found Ryan Switzer over the middle of the field, but he was hit hard by a defender who was flagged for helmet-to-helmet contact; Switzer was forced to the sidelines despite making the completion. Conner would get a first down on quick rushing play that forced him to the locker room after what looked like a lower leg injury. With Jaylen Samuels in, Roethlisberger hit him in stride two plays later for the game-tying score (with a successful Boswell PAT).

Derwin James would claim an interception and Roethlisberger would take one sack on the night. Unfortunately for the Steelers, the game-winning Chargers field goal dropped Pittsburgh to their second loss in two weeks.