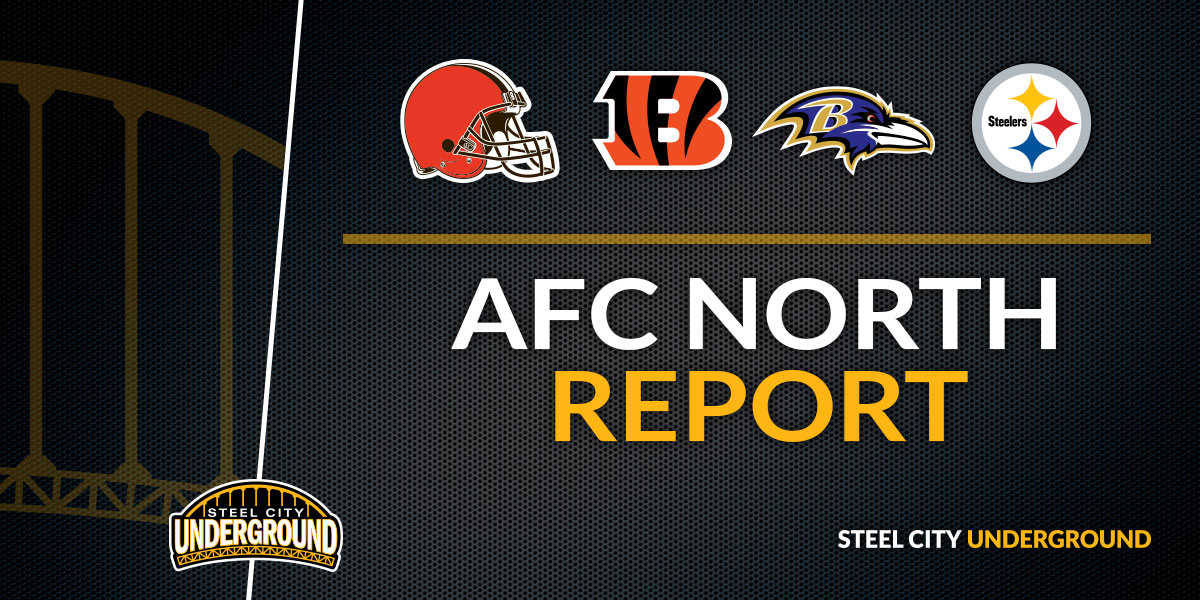 The bizarre nature of the 2018 NFL regular season continued on Sunday as the AFC North teams faced their opponents. At the end of the day, however, the lone win among divisional rivals was the Baltimore Ravens beating the Atlanta Falcons. With the Pittsburgh Steelers losing on Sunday night to the Los Angeles Chargers, the Ravens have moved closer to unexpectedly contending for the division lead with the same number of wins (seven) on a three-game win streak. Meanwhile, the Cincinnati Bengals lost to the Denver Broncos and the Cleveland Browns fell to the Houston Texans.

The passing game continues to struggle for Baltimore with Lamar Jackson at quarterback over Joe Flacco, but his dual-threat ability was a real issue for a struggling Falcons team. Keeping their offense vanilla by allowing Jackson and Gus Edwards to pound the ball on the ground allowed the Ravens to consistently gain necessary yards and eat up the game clock. Jackson finished the day completing 12-of-21 passes for 125 yards and ran 75 yards on 17 carries for a rushing touchdown. Edwards, who didn’t grab any real big yardage on a single play, gained 82 yards on 21 carries.

The Falcons’ defensive line was quiet outside of Grady Jarrett who had a strong showing, especially with the strip-sack that led to a touchdown. Hopes that Takkarist McKinley and Vic Beasley would help Jarrett create pressure were dashed as the production the Falcons’ edge defenders did little to contain Jackson or stall the Ravens’ offensive game plan.

Matt Ryan and his receivers – especially Calvin Ridley – had a game to forget as the Ravens exerted pressure with and without the blitz. Ryan looked uncomfortable for nearly 60 minutes and led to some poor throws and decisions. The offensive line was inconsistent and Zane Beadles (right guard) was no match for Baltimore’s pressure. Alex Mack could not keep Brandon Williams, a heavy-hitting defensive tackle, from having possibly his best 2018 performance. Williams, on one play, was able to push Mack into Ryan, causing running back Ito Smith to trip and be unable to block Patrick Onwuasor. The result of the play was a sack-fumble and Baltimore recovery for a touchdown.

Eric Weddle had an incredible play when he went into the air with Julio Jones on a jump ball that didn’t end up in Jones’ hands but on the turf. Weddle and the defensive backfield smothered the Falcons’ receivers all game long. Jones had just two receptions for 18 yards. Teammate Austin Hooper led Atlanta with five receptions for 44 yards and a touchdown.

The story for Cincinnati was that they could not stop Bengals running back Phillip Lindsay from having another outstanding game on Sunday. Lindsay was able to find open run lanes and read good blocks from the Denver offensive line to rack up yardage and do it before the Bengals defenders made initial contact with him. The Denver run game was a healthy mix of zone and gap plays that kept the Bengals on their heels. Lindsay ran for two touchdowns on the day.

Fellow rookie Courtland Sutton had a strong performance as well. His biggest play was a contested touchdown catch in the third quarter. Sutton continues to show great rapport with Case Keenum and finished the day with four receptions for 85 yards to boot.

Geno Atkins was the only Bengals defender to get any pressure up front and the defensive backfield was tested the entire game. Jordan Evans was the lone bright spot.

Offensively, the Bengals could have used Clint Boling at guard instead of at the starting left tackle position. Throughout the game, Boling was abused – rookie Bradley Chubb took advantage of the mismatch. Behind a sluggish offensive line, quarterback Jeff Driskel showed remarkable poise while under constant pressure. He did throw an interception on the day but finished the game with 25 completions in 38 attempts for one touchdown (to the interception). Cody Core was the lone receiver to get into the end zone. Kicker Randy Bullock contributed the remaining points for the Bengals in the loss.

Although the Browns out-gained the Texans 428 yards on offense to 384, the real story was turnovers. Baker Mayfield struggled during the first half of the game, throwing three interceptions (one that resulted in a Texans defensive touchdown). Cleveland was down 23-0 at halftime. Despite Cleveland’s offensive line giving Mayfield time to make plays, his receivers did little to create an opening he could slip the ball into the mount a comeback.

Receiver Jarvis Landry has been quiet of late, but on Sunday he was able to take over the middle of the field with little resistance from the Texans. It resulted in his first 100-yard receiving game since Week 3.

As for Houston, the fact that they controlled the ball for 15 whole minutes longer than Cleveland, methodically marching the ball down the field, really told the story of this game for the Texans. After the pick-six by Zach Cunningham, the Texans had little offensive spark and were able to rely the leg of Ka’imi Fairbairn for 17 points as he went a perfect five-of-five on field goals.

Deshaun Watson didn’t have a career day but was able to throw for 224 yards on 22 completions for one touchdown to Jordan Thomas. He was aided by a decent rushing performance from Lamar Miller and Alfred Blue who combined for 157 yards and opened up the passing game for DeAndre Hopkins to lead all Texans receivers with 91 yards on seven catches. Watson completed passes to seven different targets as he spread the offense.

Sunday night’s game was really a tale of two halves. Pittsburgh was hot early, scoring on their first two offensive series of the game. Los Angeles trailed by 16 points at halftime but found a way to come back for the three-point win.

Beyond Antonio Brown grabbing his first 150-yard receiving game of the season, the Steelers struggled on offense with drops and overthrown passes. Ben Roethlisberger completed just 29-of-45 attempted passes for 281 yards and two touchdowns. Roethlisberger wasn’t experiencing any serious pressure from the Chargers’ defensive front, but he still threw one errant pass.

Question the officiating all you want, but the Steelers allowed the Chargers to get back into the game. While Pittsburgh was able to shut down Los Angeles’ run game in the first half, they allowed Justin Jackson to break a couple big gains late in the game, especially on critical third-down situations.

The Steelers looked better on the field in many ways than the Chargers did. In the end, though, they never slammed the door shut with a killer instinct and paid the price when Los Angeles was able to kick the game-winning field goal.