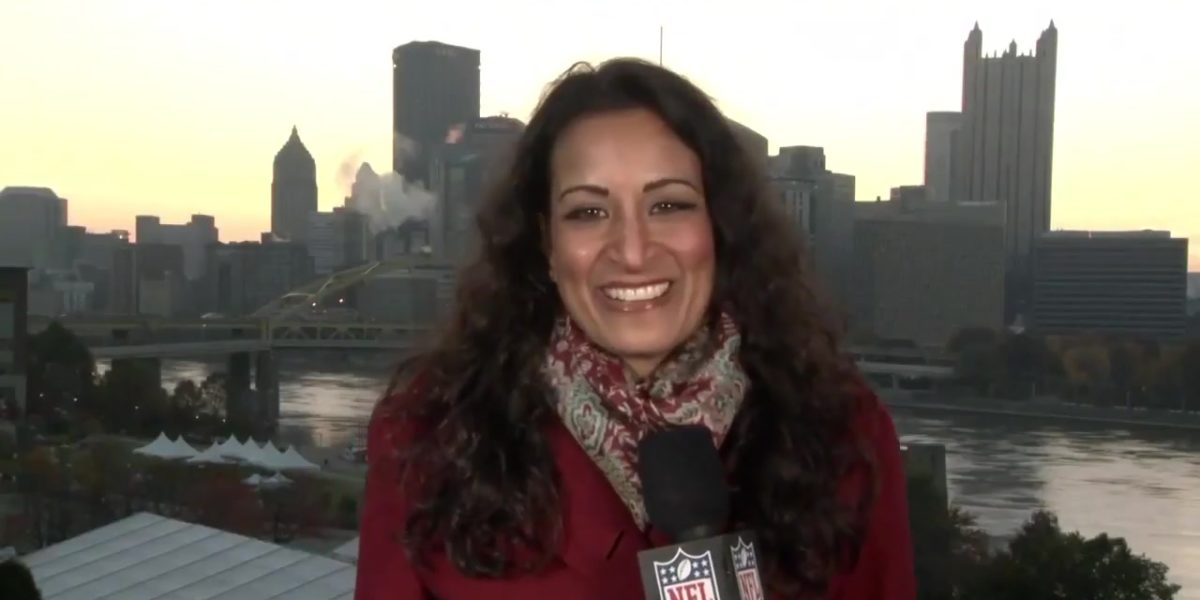 Over the past couple of weeks I’ve had the pleasure of getting to know NFL Network reporter Aditi Kinkabwala. Since football is, obviously, a sport dominated by men, I was interested in getting her perspective as a woman. I wanted to know a little about her personally as well.

I’m happy to say she couldn’t have been nicer and I appreciate her taking the time to answer my questions.

Here’s some insight into Aditi’s professional and personal life covering the NFL.

KJ Rhoden: How long have you been with NFL Network and where were you prior to NFL Network?

Aditi Kinkhabwala: I left the Wall Street Journal for the NFL network in May 2012. I did indeed have to move to Pittsburgh, but I am not a Steelers beat reporter per se. I’m officially a national correspondent.

The NFL Network has its correspondents live in different cities so we’re all easily deployable to various regions. My first year on this job, I went to 18 different cities. The last few years, the Steelers have just made so much news, I don’t have to travel as much.

KJ: Do you have a mentor you go to for career advice? If so, can you tell us who?

Aditi: Just like with friends, there are a few and they fill different needs. This can be a magical profession but there are also a lot of obstacles to navigate. I turn to people who have had experience in similar situations as much as I can; what better resource?

I’d rather not list names, just in case I leave anyone out. And because there have been so many people who have helped me, in significant ways and smaller ones, along the way.

KJ: What’s a good piece of advice someone has given you in your career that you’ve held onto?

Aditi: Almost two years ago now, Melissa Stark said to me: “Your best job is not everybody else’s best job.”

What she meant was figure out what matters to you, where you are in your life, and what works best for you at this moment – not what someone else may deem the so-called top of your profession. She used her own career as an example for me.

She’d left sports and gone to NBC and there was this public perception that she wanted to be the next host of the Today Show. But as she explained to me, she had young children at home and she didn’t want to have to jump on a plane at a moment’s notice because of a shooting or live in her car for a week during a hurricane.

So no, I wasn’t traveling as much as I once was, I wasn’t in the most high-profile position at my network, and I wasn’t necessarily “advancing” up the opportunity ladder. But I had a one-year-old at home, and I got more time with him than a lot of mothers with full-time jobs that I knew. I realized that the role I had at that very moment really was the perfect fit – and that there were many blessings associated with that.

KJ: What’s the first career you dreamed of having as a kid?

Aditi: I wanted to pitch for the Yankees. Then I wanted to be a teacher. Eventually, by the time I went to college, I wanted to be a lawyer. And it took a good seven years into my newspaper writing career before my dad stopped asking me when I was going to law school.

KJ: What was the worst job you’ve ever had?

Aditi: I’ve never hated any job I ever had, from babysitting to busing tables. I’ve been very fortunate.

KJ: What do you like doing in your spare time?

Aditi: What spare time? I have a three-year-old who doesn’t sit still and hates to sleep; there’s not much extra time! I obviously love exploring and adventuring with my son.

In terms of solitary endeavors, I’m worthless energy-wise if I don’t get a decent workout in and I love to read. Love, love, love to read.

KJ: What are you reading currently or what type of books do you enjoy reading?

Aditi: In general, I ravage suspense, be it crime or courtroom drama. Some of my all-time favorites are David Baldacci, Harlan Coben, and John Lescroart. I just finished Sarah Blake’s The Postmistress, which I loved and bawled through much of.

I’m currently reading The Genius of Desperation, by my friend Doug Farrar. It’s an unbelievably readable and fascinating look at how just about every innovation in football was born out of desperation. If you’re a football junkie, you have to get it.

Aditi: Meanness. It takes way more effort to be nasty to someone than it does to be kind.

KJ: What is your most-used emoji?

Aditi: Udipi… it’s a South Indian restaurant and I could literally get food from there twice a week.

KJ: Have you ever rushed a story to air or print and later wished you had spent more time on it? Please elaborate if you can.

Aditi: My editor at the Wall Street Journal always told us it was more important to be right than to be first. I definitely live by that tenet.

KJ: What’s the most interesting thing you’ve read or seen about the Steelers this season?

Aditi: I don’t think we’ve seen it yet.