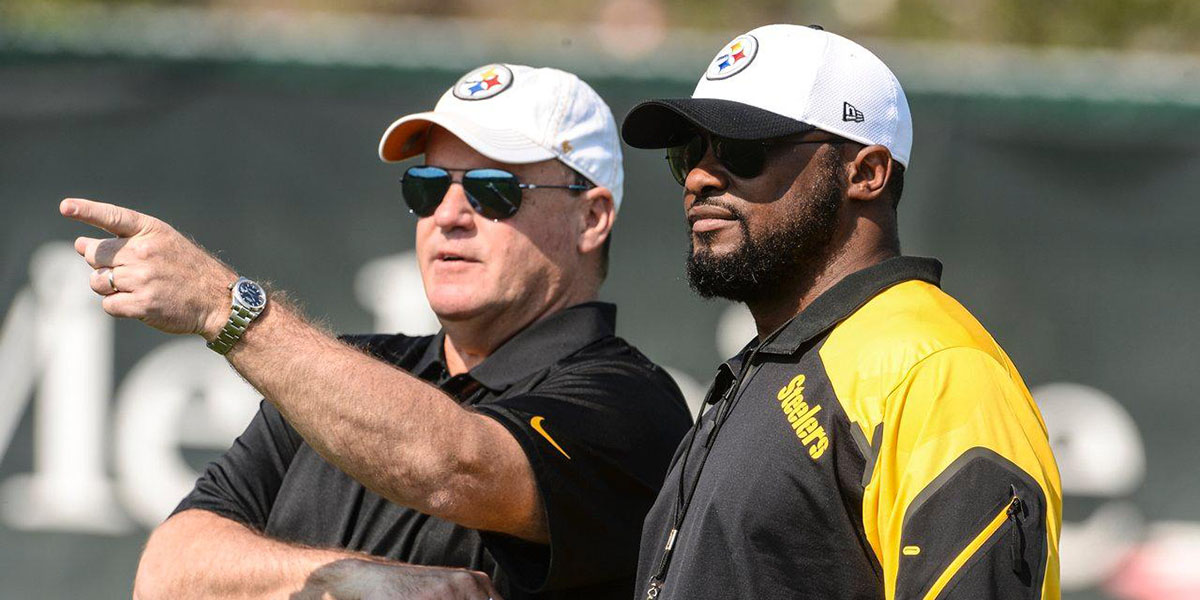 Kevin Colbert may be part of the problem in Pittsburgh

Since the early 2000’s, Kevin Colbert has been considered an essential member of the Steelers organization. As the Director of Football Operations, he was responsible for drafting a handful of Pro Bowl, All-Pro, and even future Hall of Fame players. In three consecutive years in the first round from 2003-2005, he selected Troy Polamalu, Ben Roethlisberger, and Heath Miller.

As recent as May of 2018, Rotoworld voted Kevin Colbert the 2nd best General Manager in the NFL – behind only Bill Belichick. Here’s what they had to say:

Colbert is an elite general manager. Despite those lean times earlier this decade, Colbert’s rosters have gone 188-99-1 since he first came onto the scene in 2000. They have won two Super Bowls and reached a third. That’s a track record only Bill Belichick can better. Where Colbert’s early-decade squads were aging and top heavy, his most recent have been deep and dynamic.

Colbert was the Director of Football Operations for the Steelers from 2000-2010. During this time, he assisted in the assembly of a franchise that would win two Super Bowls. In 2010, Kevin Colbert became the first ever Steelers General Manager – putting him in charge of player transactions and acquisitions as the head executive in the Steelers organization.

Despite all of this generous praise, I would argue that – as of late – Kevin Colbert has been part of the problem, rather than part of the solution.

There was a time I could kick my feet up and relax as Kevin Colbert did his thing during the NFL draft. In addition to the phenomenal players he drafted that I mentioned earlier, Colbert was also responsible for drafting players like Santonio Holmes, Lawrence Timmons, LaMarr Woodley, Emmanuel Sanders, Antonio Brown, Maurkice Pouncey, Cameron Heyward, David DeCastro, and Ryan Shazier.

So what is the issue with Kevin Colbert?

As you can see, the Steelers have missed more often than they hit in the past four years. Bud Dupree has not been worth a first round pick, Artie Burns was flat-out awful, and Senquez Golson never saw the football field.

The 2018 draft class simply needs more time to develop before anyone can fairly assess them. However, my initial thoughts lead me to believe that most of them will either be average picks or misses altogether. Most big boards last year had a 2nd-3rd round grade on Terrell Edmunds, and I believe he was over-drafted. Meanwhile, James Washington had a rough rookie season and struggled to make an impact.

The 2017 draft class helped salvage some bad drafting over the past four years. With missing on at least 2 of their past 4 first round picks, Steelers fans should have little confidence in this point that Colbert is going to own the draft like he so often used to.

It’s no longer big news to anyone that the Steelers locker room is in shambles. Players have spoken poorly about their teammates, and the Steelers are the center of all football news with their recent drama. Though much of this responsibility falls on Mike Tomlin, I believe Kevin Colbert needs to be more proactive as a manager.

Antonio Brown and Le’Veon Bell have been at the center of talks surrounding the Steelers. Though they are both former All-Pro players, they scream “me first” personality types. Mark Schlereth had this to say about Antonio Brown:

When we play football it’s the ultimate team game, [Antonio Brown] is the ultimate in selfishness… He just strikes me as a guy that could lose a game and be completely satisfied as long as he’s got 10 catches for 165 yards and 2 touchdowns.

With everything that has come to fruition as of late, I fully believe Schlereth’s statement. If Antonio Brown would have been traded last season, the Steelers could have collected a king’s ransom for him. There are whispers that they could have received a return of at least a 1st and a 2nd round pick. Had Colbert been aware of the issues Brown was causing (on and off the field), they could have traded him when he was worth a whole lot more.

Likewise, we all knew years ago that Le’Veon Bell was going to hit the market the first chance he got and go where the money takes him. Had Kevin Colbert been more proactive as a GM and traded Bell before his rookie contract expired, the Steelers could have received a high draft pick for him.

In 2013, the Steelers had a chance to receive a 3rd round draft pick from the Patriots in exchange for Emmanuel Sanders in his final year. Without any intention of signing him to an extension, the Steelers let him walk in free agency. They brought in Mike Mitchell and received nothing towards the comp formula for losing Sanders.

Great General Managers like Les Snead (Rams) and Bill Belichick (Patriots) are constantly making moves to improve their team. Snead traded for big names like Brandon Cooks and Marcus Peters and brought in players like Ndamukong Suh and Andrew Whitworth, while Belichick isn’t afraid to trade away good NFL players like Brandon Cooks, Jamie Collins, or Malcolm Butler. Doing this allowed him to stockpile draft picks and freeing up a ton of money to sign a top flight corner like Stephon Gilmore.

I am by no means a Kevin Colbert hater, and I believe he has done amazing things for the Steelers over the years. As far as General Managers go, you could do a whole lot worse. However, with so many busted picks as of late, it is getting harder to trust Colbert during the draft process. I also feel that Colbert needs to be more proactive in his management style like some of the other great General Managers of the NFL.

I am not calling for the firing of Kevin Colbert, but his management style as of late leaves something to be desired.