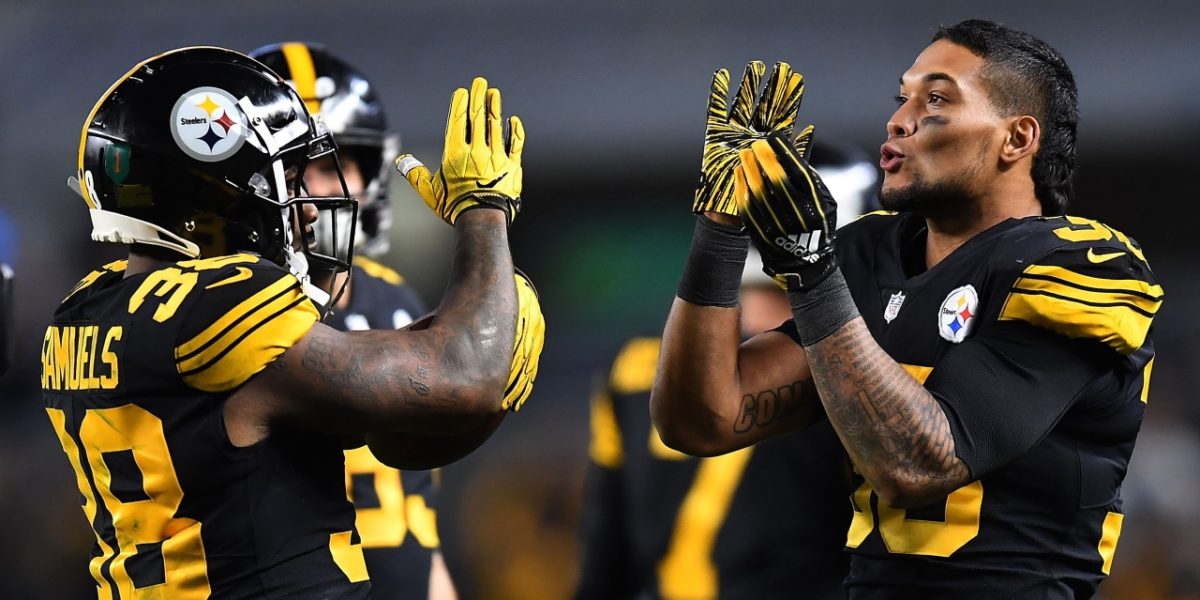 Just this week, the Pittsburgh Steelers hosted five running backs for pre-draft visits ahead of the upcoming 2019 NFL Draft. Running back wasn’t necessarily a top need with James Conner and Jaylen Samuels stepping in nicely during the holdout of Le’Veon Bell. Behind Conner and Samuels, however, there is untested depth – that seems to indicate the Steelers are doing due diligence in evaluating how they made spend their numerous draft picks this year by evaluating running backs who could improve the position.

Signed through the 2018 season, Stevan Ridley no longer appears on the Steelers’ official roster and is listed as a free agent on other sports sites. Although no official news has been released by the team regarding whether they will re-sign Ridley or not, they have moved Trey Edmunds to the third running back spot on their unofficial depth chart. Ralph Webb (Vanderbilt) and Malik Williams (Louisville) have yet to see time on the active roster.

Harris, the Kentucky Gatorade High School Player of the Year (2014), USA Today All-American and No. 1 running back recruit in the nation made an immediate impact at Alabama as a true freshman, carrying the ball 46 times for 157 yards and a touchdown (he added four receptions for 13 yards and logged 174 yards as a kick returner). Harris became Alabama’s workhorse in 2016, leading Alabama with 1,037 yards and 11 touchdowns (ranked seventh in the FBS with 7.4 rushing yards per attempt). In 2018, Harris was named second-team All-SEC, starting in 14-of-15 games played and led the Tide with 876 yards and nine scores in the rushing game while adding 22 receptions for 204 yards.

A disciplined, hard-nosed rusher who can pick up tough yardage on short downs and is effective in the red zone, Harris would be a nice addition to the Steelers’ backfield. The downside is that he’ll need to be paired with a more dynamic threat to complement his weaker areas in quickness – especially around the perimeter of the offensive line – and lack of ability to be patient enough to find the gaps created by blockers instead of just making a blast at the line. The Steelers have the complement in Conner and Samuels.

Sanders, the winner of Pennsylvania’s Mr. Football award in 2015, played behind All-American Saquon Barkley at Penn State, limiting his early production to mainly special teams. Sanders didn’t really break onto the scene until Barkley was off to the New York Giants in 2018, but he ran for 1,274 yards and nine touchdowns on just 220 carries. Sanders also caught 24 passes for 139 yards. Compared by some to T.J. Yeldon, Sanders has good footwork and the agility to break contact from tacklers. His average acceleration shows he’s more athletic than outright explosive.

A running backs coach for an AFC team at the Combine said of Sanders, “He doesn’t have Saquon’s go-go juice so he needs to be careful with all that [start-stop] stuff. Just trust your eyes and go. That’s what I would tell him.”

Weber changed his commitment to Michigan to play for Big 10 rival Ohio State. As a redshirt freshman, Weber was named Big Ten Freshman of the Year and second-team all-conference honors after rushing for 1,096 yards on 182 carries for nine scores in just 13 starts. A hamstring injury hampered his sophomore season, but he still scored ten touchdowns on the year. During the 2018 season, Weber won honorable mention All-Big 10 honors for carrying the ball 172 times for 954 yards and five touchdowns, adding 21 receptions for 112 yards and a touchdown.

While Weber has the size, he struggles to break free without great upfront blocking. He did well in an off-set gun formation but has a so-so downhill pace and limited burst getting through the line. A reliable dump-off option in the passing game, his draft stock took a hit when scouts realized that has great overall speed but he lacked the power in the open to break big plays down the field.

Scarlett is an athlete – great size, foot quickness, and strength – who has fluid movement on the field and is elusive at the second level. Where he may be a risk for the Steelers is in his off-field issues while at Florida. Scarlett was arrested for misdemeanor marijuana possession his freshman year (causing him to miss the team’s bowl game against Michigan) and then was caught up in a credit card fraud scandal with other Gators teammates and lost the entire 2017 season due to suspension. Back on the field, Scarlett started 12-of-13 games in 2018 and rushed for 776 yards and five touchdowns on 131 carries.

Scarlett has frustrated coaches and scouts with what appears to be a penchant for hesitating in the early stages of a rushing play and limited vision. He doesn’t have the greatest hands and potential character concerns could see him dropping out of draft contention and looking for a rookie contract as an undrafted free agent.

Homer started the final nine games of the 2017 season for the Miami Hurricanes after Mark Walton aggravated an ankle injury that forced subsequent surgery. During that time, Homer carried the ball 163 times for 966 yards and eight touchdowns. He also grabbed 19 receptions for 219 yards (11.5 average) and a touchdown. His play earned him second-team all-conference honors by ACC coaches. In 2018, Homer started all 13 games and led the Hurricanes with 985 rushing yards (four touchdowns) and added 186 yards receiving.

With experience in the I-formation and offset, Homer excelled as an outside rusher who visualized his upfront blocking to run into clear space. A bit undersized, he plays smooth and is solid in pass protection. Homer won’t avoid contact; he takes the initial hit or finds ways to resist tackles to fall forward for extra yardage. At times he’s too willing to take on the tackler in gaps instead of trying to cut for a better angle of escape. Homer struggled with ball control, resulting in turnovers that could be extremely costly at the next level if not cleaned up.

Just because the Steelers bring players in for visits does not indicate that they’re necessarily going to put those players on their ‘big board’ once draft day rolls around. Every NFL team likes to take a look at potential players to evaluate skills and have one-on-one time where only their scouting talent has an opportunity to take a hard look.

The fact that the Steelers looked at five running backs this week, however, seems to indicate that the organization is interested in seeing if they can’t shore up depth at the position. One obvious reason would be that the players behind Conner and Samuels have little-to-no experience in NFL games. Another reason is that when Conner was out due to injury in 2018, Samuels got little help from Ridley and the offense became very one-dimensional. If the Steelers are to remain competitive and find success in 2019, they need to look at the future of the team as early as possible.