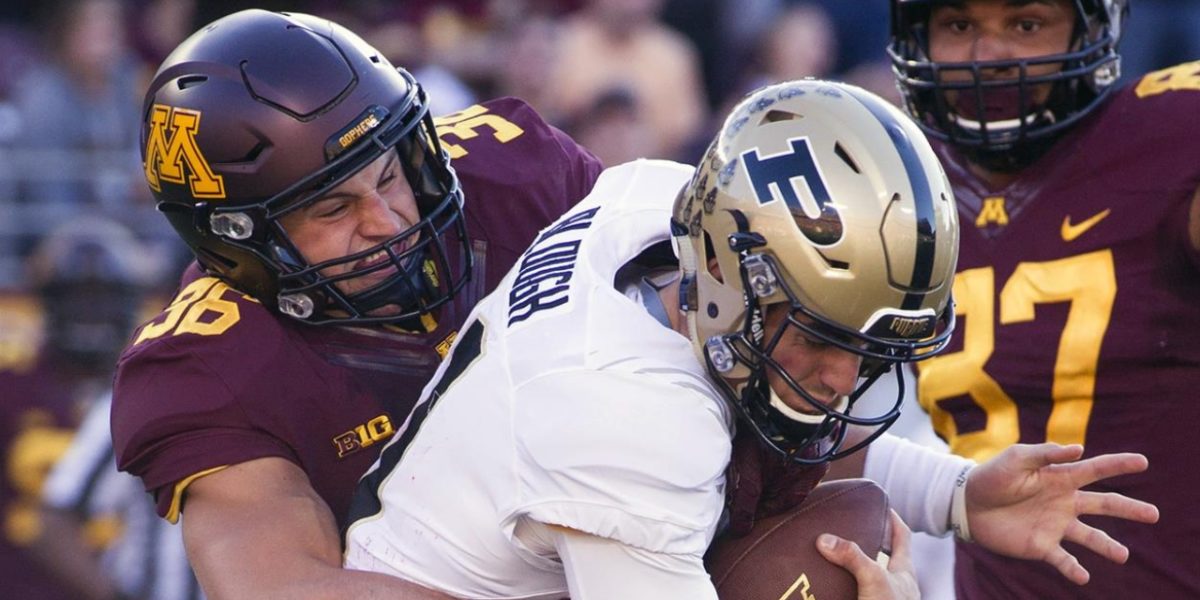 From walk-on to top linebacker prospect, Blake Cashman is ready for the NFL (Interview)

Hard work and determination are staples of Blake Cashman’s game and it’s how he’s gotten this far. A walk-on to Minnesota who converted from safety to linebacker, his entire journey can be attributed to those simple yet vital attributes.

Changing positions during your first year can be a radical change. Safety and linebacker are positions that completely differ in assignments and Blake had to adapt how he plays.

“As a linebacker you really gotta know everyone assignment up front for the D-line, you have to know what’s going on behind you in coverage just because you are the second level of the defense. I think the biggest adjustment was just run fits and making an impact on a play to stop the run. Cause at safety you can identify the gap for the running back and see where the ball is going, but at linebacker the guys on the line are coming at you so fast that you have to be very quick and there really isn’t much time for hesitation”

While Blake has come a long way since he first transitioned to linebacker, he knows he still has more to work on has he prepares for the NFL.

“Knowing what I’m gonna be facing in the NFL – tight ends aren’t just big lanky guys like a lot of them are in college. At the NFL level they’re almost receiver like, guys like Travis Kelce who are very athletic and talented. so as a linebacker you’re gonna be matched up against that so just working on man coverage skills against bigger body guys who are fast and athletic.”

“And then, something I didn’t too much at Minnesota is getting my hands off of lineman, so like striking and shedding them. And the way NFL defenses are structured sometimes you have to hold gaps instead of just shooting gaps like we do here at Minnesota”

Blake is wise to be preparing to match up against tight ends in the NFL. As tight ends get faster and more athletic, teams are constantly looking for defensive players to try and neutralize these mismatch players.

It’s an area Blake is working on, but he did get some legitimate experience in college going against a tight end who will likely be a first round pick in the 2019 draft.

“One guy who I was matched up against for a whole game was Noah Fant from Iowa. I had to man him a lot against Iowa and you know he’s really fast and big and tall, he gave our defense all sorts of problems. So he’s a guy that challenged me a little bit but it’s good to play a guy like that, an NFL-like tight end.”

Covering tight ends is a responsibility he should expect in the NFL. At the combine Blake displayed his speed when he ran his 40 yard dash in 4.5 seconds (94th percentile among linebackers). He also showed his explosiveness when he jumped 37.5” in the vertical jump (85th percentile) and 124” in the broad jump (89th percentile). You can see his safety background reflected in his testing and his athleticism will certainly appeal to NFL teams.

Making that conversion and getting to where he is now wasn’t easy for Blake. In fact it wasn’t until after his sophomore season that he received a scholarship. It was a moment that he spoke of with pride and admiration.

“Coming in as a walk-on it a scholarship was a goal of mine. I was coming off a good sophomore year, I was playing well. We’d actually went through a coaching change then so I wasn’t sure if I’d have to prove myself another year to the new coaching stuff.”

“When I got it I was very excited, it was very emotional because I put in so much work and effort. And just the love I felt from my teammates, they were maybe more excited than I was. They were all like jumping up around me screaming and they were all just very happy for me. How exciting it all was, that was the moment that stuck out to me. It was very special, to have a group of guys that care about me and the love they had.”

Blake’s worth ethic is a true testament to how far he’s come, and utilizing work ethic and opportunity is the advice he would give to other players who are walking onto a college program.

“I’d first of all tell them to take that opportunity to go prove yourself. At the end of the day, as long as you believe in yourself, have the confidence in your abilities it will pay off. But you gotta be the hardest worker, you gotta have a lot of determination.

There will always be guys who get an opportunity before you, but as long as you keep busting your butt and working hard and understanding the playbook, you’ll eventually get your opportunity. You gotta continue every day to be a better version of yourself”

To perform as he did on game day, Blake had to perform and put in work all throughout the week before game. He is a true adamant about out-preparing his opponents. As they say, failing to prepare is preparing to fail.

“So our team we have film review and practice, but then after practice and I’m done with classes I’ll go back and I’ll do usually 2 hours a day of watching our opponent and even film from our practices, just trying to see what I can do better, what I can do faster, and make sure any mistake I made in practice is corrected so I’m ready for the next day. Putting in that effort and that time it pays off on game days. I believe being a smarter player makes you a better player.”

“I watch the offensive line – see if they’ll give anything away to tell you what run play they’re doing, if they’re running an inside zone, outside zone, power. Watching you might find some keys, like a quarterback may drop his hand and a second later the ball snaps. You look to see if that’s consistent throughout, see if they’re doing it at home games or away games – what’s going to tip you off that helps with timing like if you’re blitzing or whatnot. The more film I see on a team you kinda get an understanding of how fast guys are moving and it helps come game day to know what kinda pace teams will be playing at”

I wanted to know if there was a particular instance for Blake where he felt his preparation and film study enabled him to make a big play in a game.

“Against Fresno State I remember we called a blitz for me on 4th and 1 to make the stop. I could tell the way the guard in front of me was leaning like it was gonna a stretch away from me, so as the quarterback started getting ready I started creeping towards the line, I timed it perfectly and blitzed the gap and I was able to beat him and make the tackle”

Blake doesn’t take all the credit for his work ethic. He attributes his attitude towards the advice his dad gave him growing up.

“My dad he always told me growing up, regardless of what you’re doing, do it right. That’s something I just carry with me every day in how I approach things. It doesn’t matter if I’m vacuuming my apartment or preparing with film, if you’re gonna spend time doing something do it the right way.”

“I’m somebody who I have a lot of pride in my work, and your work kinda represents who you are. It’s really paid off in football just how I prepare and in practice. I believe that time is valuable and in using it the right way – I just carry that approach with me. Its simple words from my dad but it’s gotten me far in life and definitely helped me a lot.”

Looking forward to his NFL career, Blake seems to be a great fit for the Pittsburgh Steelers. Given their need for athletic linebackers, he could slide right in and play a contributing role on defense.

While the Steelers weren’t present at his pro day, they did take time to meet with him at the NFL combine.

“Yeah I spoke with the Steelers for 20 minutes. They just asked me questions to get to know me and then near the end of the interview they had a notepad and they just had me draw up the kind of defense Minnesota had”

Some may be concerned by the fact that the Steelers didn’t show up to Minnesota’s pro day, but there’s no real correlation between the Steelers post-round one draft picks and pro days. Wide receiver JuJu Smith-Schuster is a great example because according to him the Steelers only contact with him was a brief meeting at the NFL combine. No pro day, no visit, the Steelers simply knew they like him and drafted him in the second round of the 2017 draft.

Like JuJu and other recent draft picks by the Steelers, it’s clear that character and worth ethic are two attributes they’re drawn to. Blake Cashman’s fit in Pittsburgh is obvious – from his work ethic to his athletic ability, he is the type of player the Steelers should be targeting in the 2019 draft.

2 responses to “From walk-on to top linebacker prospect, Blake Cashman is ready for the NFL (Interview)”