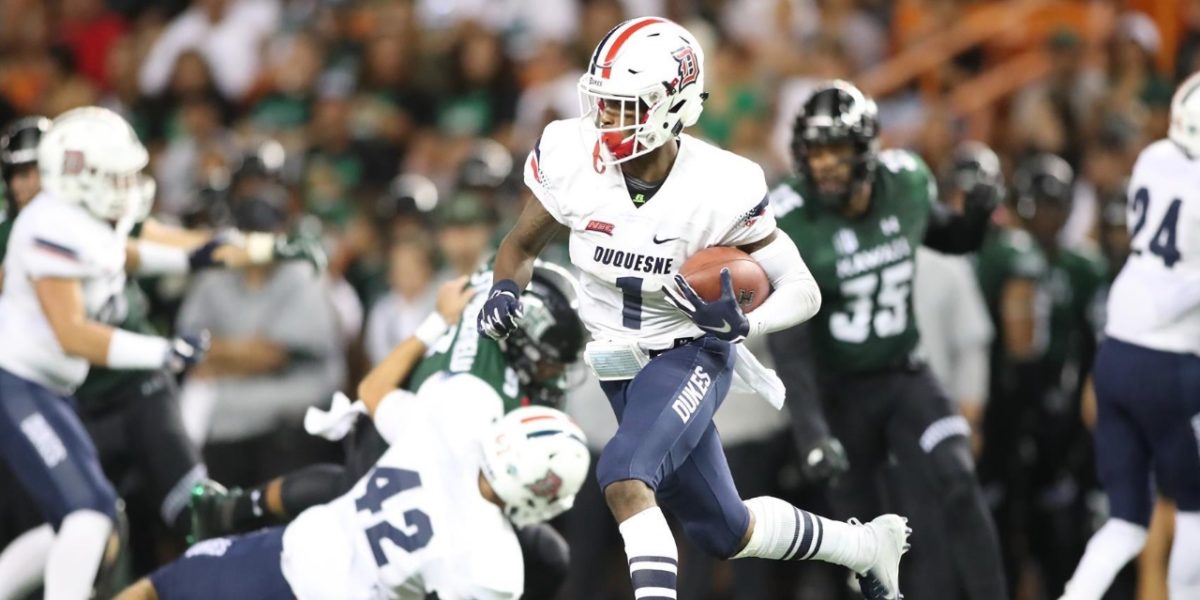 With so many colleges in the Pittsburgh area, every year there are local players on the Steelers radar. Everybody knows Pitt, but this year it’s a wide receiver from Duquesne University who is a major sleeper: Nehari Crawford.

With the Steeler’s scouts at his pro day, and having already completed a pre-draft visit to the Steelers facility, it’s clear Nehari is a player on the Steelers radar.

Crawford currently resides in Fort Pierce Florida where he’s living with his parents. He’s able to spend these couple months working out and training because he managed to graduate from Duquesne a semester early. Given that he also was on the track team, it was not an easy feat.

“I feel like it was the situation at home, like it’s violent in the city. There’s a lot of shootings, so I’m like ‘I don’t want to be home, I don’t wanna get caught up in that’ I’d rather stay up at Duquesne in the summertime and I started taking summer classes. I started noticing if I take an extra class a semester, I’ll be able to graduate in 3.5. So I set my mind to it and I got it done.”

Taking extra classes is tough for any student, let alone somebody who is an active member of two different sports programs. Crawford’s ability to balance track, football, and academics is a testament to his work ethic.

“I was pretty much busy year round doing sports stuff and I was going a lot during the weekends especially with track, like you go all weekend. It was hard cause in my last 2 semesters I took 18 credits. It was kind of overload but I was able to handle it”

With his degree in hand, Crawford is now able to focus on preparing for the NFL. He’s working out at his local high school and even using it as an opportunity to set an example for the community.

“I come work out at my high school with the young kids, showing them motivation like ‘look I was once here and look where I’m at now’”

Crawford sets a great example, which is clear not only through his work ethic but the stats he put up during his time at Duquesne. Despite not becoming a full-time starter until his junior year, Crawford had a prestigious college career:

Crawford was hopeful that teams would be interested in him, especially given his college stats. Things started to get real for him whenever he received a text from his agent telling him the Steelers wanted to fly him up for a visit.

“My agent had texted me earlier saying ‘Steelers wanna fly you up’ an hour passed and I got the call. It was my first pre-draft visit it was pretty cool, like I didn’t think it would happen this fast”

While a lot of the Steelers staff was away at pro days and deep in the pre-draft process, Crawford still had the opportunity to talk with many members of the staff.

“I talked to everybody except Tomlin and the owner. The receivers coach (Daryl Drake) wasn’t there either, but the linebacker coach (Jerry Olsavsky) we had a long talk… it was football talk really, like ‘yeah you went to Duquesne, you had a great career there that’s why you’re here’ and it was talking like normal conversation. I think they were just trying to feel me out to see what kind of person I am”

Crawford also touched on the overall culture and vibe he got from his visit.

“It was nice, it was up-spirited, like it was a cool vibe. I could just feel it like ‘this could possibly be home’ and everybody around had a smile on their face and it just felt good”

Crawford isn’t merely a feel-good story and an easy guy to root for. He also has legitimate testing numbers to back up why the Steelers have interest in him. Here are the numbers from his pro day he put up in chilly 28-degree weather:

Crawford explained that his 4.46 isn’t even the fastest time he’s managed to record

I was also surprised when doing my research that the Steelers had on record Crawford recording a 6.58 three-cone drill. Crawford explained he ran that time indoors the week of his combine. This number would’ve given Crawford the 2nd fastest time at the combine behind David Long at 6.45. It also would’ve given him the #1 fast time among all wide receivers, beating Miles Boykin’s 6.77.

Crawford’s long shuttle time (11.39) is also impressive because it would’ve tied him for the 3rd fastest time at the combine, tying Hunter Renfrow as the fastest wide receiver.

While Crawford’s speed is one of his greatest assets, he is still working on improving his overall game. Part of that includes watching tape of other NFL receivers that he looks up to.

“I’m working on more receiver stuff, like getting more creative as far as my craft and running routes. I watch guys around my size like the 5-10, under 6 foot receivers, around 185 pounds. I see what they do versus these NFL DB’s and I work on stuff that they do to try and improve my game. My favorite receiver is Desean Jackson. Even though he isn’t as crafty as some guys, as far as at the line, he’s so fast and gets the deep ball and those screens and that’s what I like.”

One of Crawford’s strengths is his versatility. Like Desean Jackson who he looks up to, Crawford is able to be an impactful player as a returner. A look at his tape shows how contact balance is a big part of his game. He prides himself on his ability to not go down on first contact.

“I’ve just always been able to do that, like there would be a lot of times guys always try and take my head off, so when I see them coming I just kinda play with them a lil bit. If I see you taking a bad angle I can see it out the gate, like my peripheral vision is real good so if I slow down a lil bit like they’ll hit a lil bit of my should and I’ll still be able to stay up. My center of gravity when it comes to football stuff its real good, it’s something I’ve always had.”

An interesting fact about Crawford that connects him to the Steelers, even more, is that he’s also a cousin of Steelers linebacker Ryan Shazier. Crawford talked to me about their relationship and the affect Shazier’s 2017 injury had on him.

“When it first happened (Shazier’s injury) I was down like I feel like I got hurt too. I would visit him in the hospital every week just to be with him, just to be around and make sure everything’s going good. Like from start to finish I’d always be around him cause he’s always been in my corner – he’s motivated me.”

“I dedicated my senior year to him. Like how he always warmed up with no shirt, I went out before games and warmed up with no shirt. I even got a tattoo ‘Shalieve #50’ just to show him how much he means to me. He’s really like a brother, like he does so much for me. Like help me all throughout the process, and just the love I got for him is crazy. To see him going through that it hurt me, like I remember one day I was in the hospital and he just started crying like ‘yeah man its crazy that you’re watching me go through this type stuff’ and that was just like… the bond we have is crazy”

Shazier also played a guiding role throughout Crawford’s career at Duquesne, giving him advice and even spending time with him watching film.

“All throughout college he was like ‘you’re at a disadvantage being at a 1-AA school, so you gotta really go hard and set yourself apart from everybody else on the field while you’re there to make sure you’re noticed by NFL teams. ‘ I would work out with him to make sure to be at my best, and then we’d just talk football. We’d watch film and id ask him he what he’s looking at, and different stuff like me picking his brain, him picking my brain. Just talking to each other and seeing things from different viewpoints from the other side of the ball.”

Shazier isn’t Crawford’s only NFL connection, he also has a close relationship with Ravens quarterback Lamar Jackson who he met in high school.

“Yeah that’s my dog right there, we still cool to this day. We chop it up all the time. When we played together in the all-star game we lived together for like a week and ever since then we’ve just been tight. Like he says ‘you should’ve came to Louisville with me” we still kept in contact all throughout college and I just talked to him the other day telling him I was going up to visit the Steelers”

Crawford is a big fan of Jackson’s game, but I did make it clear to him that I would be upset if he went to the Ravens over the Steelers. Crawford laughed off my comment and made it clear he’ll be happy to go to any team that will give him a chance. He’s a firm believer that any team that will take a chance on him will be happy with their decision.

“A team should draft me cause you’re going to get everything I have. I bring so much to the table, like people say I’m undersized but they said the same things about AB and he went into the league and tore it up. Same thing with Desean Jackson. I bring a lot to the game, like I’m not just fast, I’m really football smart, I know the game.”

“On the return side of the ball I can be really dynamic and like even if they want me to run down the field on a kickoff or punt I’m gonna run down there and try and hit somebody. I’m fearless for real, I don’t really care about what anyone else thinks, and I know what I bring to the table. And if somebody gives me a chance I promise they won’t regret it.”

Crawford is confident in his abilities and is ready to show the NFL what he can do. Everything from his testing, college program records, and diligence with his studies show that he is ready to take on the challenge of the NFL.

He just needs a team to give him a chance, and I’m crossing my fingers that the Steelers will be that team.