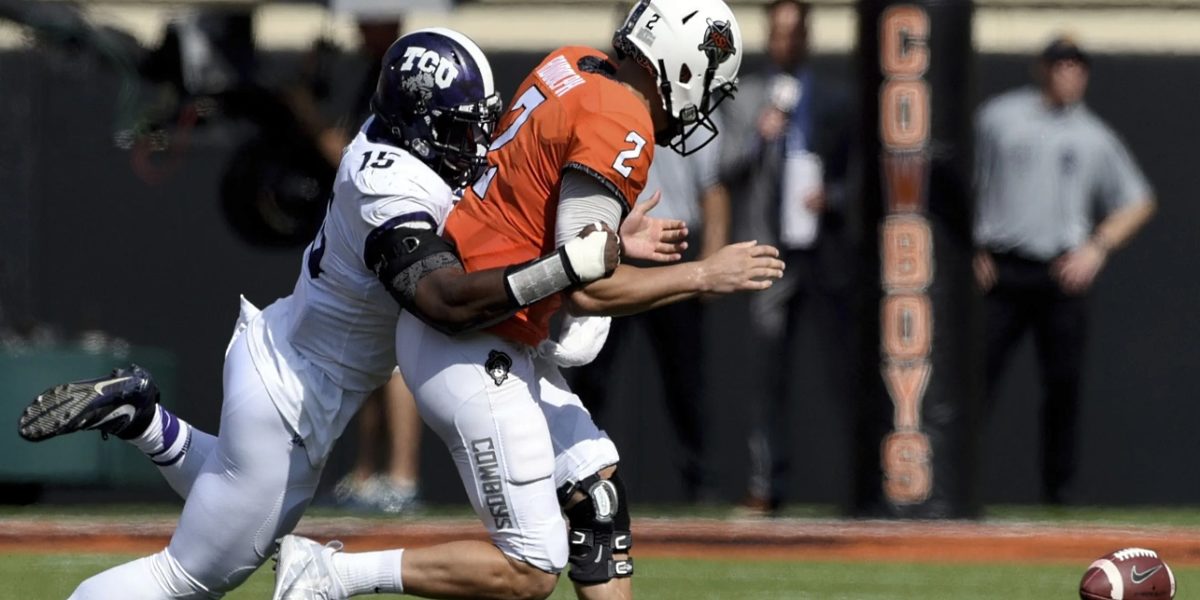 Ben Banogu on pass rushing, his versatility, and his Steelers visit (Interview)

Ben Banogu is an edge rusher from TCU who is drawing a lot of interest around the NFL. He has all the athleticism teams want and believes he has the highest ceiling among all defensive lineman in the draft.

Banogu loves being a pass rusher and has no lack of confidence in his abilities. He has the mindset you want in a player who will be fighting in the trenches.

“It’s the thrill of hunting something down. There’s nothing better than knowing you have an objective, that’s getting to the ball or getting to the quarterback, and just the thrill of somebody trying to stop you from getting there. Like you’re hunting down your prey, or in military terms, invading someone’s land and taking over.

That’s the biggest thing, when somebody is trying to stop you from getting to where you need to go and you know you can kick their ass.”

At TCU, the players are taught more scheme than technique. This explains why some of the common knocks again Banogu include polish and lack of technique. He has all the tools and work ethic teams want, he just needs the right coaching staff to unlock his best game.

“I grew up watching Von Miller, that’s my guy I watched the most. I watch Khalil Mack as well, Dee Ford is a recent guy that has my build so I watch him, Frank Clark from Seattle I watched him too. So guys that kinda fit my mold and my frame and I try to emulate the moves they do. The double swipe I got from Von and the spin move was actually a Dwight Freeny move, since he’s the best spin move guy out there – he’s not my mold but it’s something I like and I try to incorporate into my game.”

His lack of polish doesn’t imply that Banogu didn’t put the work in to prepare for his opponents. He would always evaluate his upcoming opponents and prepare a strategy for his pass rushing.

“Depending on who I was going against my method was a little different. If it was a guy that was more athletic that could really kick and use his athleticism to get back then I would use more of my counter moves, spin moves, swiping inside. If he was a bigger guy and relied more on strength and his arms then I’d try and use my speed and get around him. A lot of guys are different so you just have to figure out their tendencies whether that’s watching film, or after a couple reps of going against him you figure him out. But you try and get to know them before a game.”

While he has an array of moves he used, Banogu does have a favorite move he likes to use against linemen.

“I’m a big into the swipe, double swipe and my counters would go off that, like my spin move. Those are the two moves I hang my hat on both of them are based on speed.”

Banogu also touched about the nuances of TCU’s defense and the process of planning his attack.

“We were a read and react defense. on passing downs I’d already have a set move that I was gonna use but depending on what he gave me it would definitely dictate what I would do. You kinda get a feel for what move are gonna work and aren’t gonna work against a guy.”

In a read and react defense, the edge rushers responsibility is setting the edge depending on what the offensive tackle does. So basically, Banogu would read the offensive lineman and then react accordingly.

Beyond pass rushing, modern linebackers are also used in coverage – especially in a 3-4 system like the Steelers use. As we’ve seen with T.J. Watt, edge rushers are used to drop into coverage and even play inside linebacker at times. With his athleticism, Banogu is confident in his coverage skills.

“Teams have been working me out watching me drop into coverage. At TCU we were asked to do coverage too, not as much as an every-down linebacker would but enough where coaches to have film to look at. And if they go look they’d see that I was really good with all my drops. I can close in space, I was step for step with running backs – for us we were mostly dropping into flats. They asked us to do a lot at TCU and whenever my name got called upon to cover it was pretty fluid.

Teams are seeing that and they like what saw, that’s why I’ve been getting more work at dropping so they can see ‘how much can you really do’ and ‘if he can do as much as we think’ and that was my biggest thing going into the draft process, showing teams I can play linebacker and I can rush the passer”

Banogu also had the opportunity to showcase his abilities at this year’s senior bowl. The event gave him an opportunity for coaches to put him through the ringer and see what all he can do.

“My biggest thing from the senior bowl was that I wanted to show them I could play about anywhere, I wanted to show I was willing to try new things. They put me at off-ball linebacker in sub packages, so for me it was me being vulnerable and showing them I am willing to try anything and I can make quick progress diagnosing concepts and information at a high rate.

I think teams and coaches saw that and came away really impressed. Every time I talk to a team they bring up the senior bowl and my willingness to try new thing and ability to process information fast, and they can see in my body movements that linebacker, dropping into coverage, and rushing the passer, that even though I wasn’t taught the technique stuff at TCU I can do them really well and have a lot of room to grow.”

The Steelers have clearly liked what they’ve seen of Banogu through his tape, his excellent combine performance, and the senior bowl. So much that he was brought in for a pre-draft visit on April 8th, giving the team an opportunity to get to know him more as a person.

“I think the visit went pretty well, they were talking to me about the position that TJ Watt plays and I met with the linebackers coach, special teams coach, defensive line coach, met with Tomlin and the GM, and really just touched based with everyone. When it came to talking about me as a person I think I knocked that out of the park and when talking about schemes and everything they saw that I was an intelligent player.”

While he isn’t overly familiar with Pittsburgh, Banogu described how he could feel the well-known blue-collar vibe of the city during his visit.

“I worked out at the Cowboys facility too, but with the Steelers it was different in the fact that their facility was more industrial, it kind of had a blue collar feel to it. And the people I met replicated that. Like you could so how everything was built and everyone meshed well. You could see everyone was kind of blue collar and had a standard of winning and the guys I met you could really see that in the way they speak and talk about Steelers nation. I was really impressed talking with them and when I was leaving I was like ‘man, I kinda wanna be a Steeler’ it was cool, I loved the environment.”

One of the most important aspects of the pre-draft process is learning about a person’s character. While it’s obviously important to evaluate their ability on the field, it’s crucial to assess their demeanor and if they are a fit for the locker room and culture.

Banogu is confident he meets these criteria and would elevate any team that drafts him.

I think they’re going to get a high character guy that has relentless motor on the field and that probably has the highest ceiling in the draft – I feel like I have the highest ceiling in the draft among all the d-lineman and edge guys. So I feel like the team that drafts me is gonna get a guy that 3-4 years, even in 2 years maybe, will be one of the better pass rushers in the class, or even in the league”

Banogu certainly isn’t short on confidence. He’s a player that believes in himself and that belief is something he feels is what has brought him this far in his career.

“Best advice I ever got was always bet on yourself. I feel like a lot of times you get into a mindset that you’re always comparing yourself to somebody. But the biggest thing is taking care of yourself and being the best player you can be, having the confidence to go out there and do all the things you want to do. And if you’re not confident in yourself, you don’t believe in yourself, who else will?”

Banogu would be a perfect fit for the Steelers. Beyond his athleticism and potential, he has the type of character the team wants in their locker room. His alpha mentality is clear, and while he is oozing confidence, he is still a willing student who is aware of how much work it will take to reach his potential.

The comparison made to T.J. Watt during his visit makes sense considering Banogu’s versatility. He has the athleticism needed to play that type of role in this defense, all he needs is the right coaching. Given the Steelers lack of edge depths and Bud Dupree’s uncertain future, Banogu would be a perfect selection. He’s aware that he needs time to develop, and if drafted, he definitely has the potential to be starting in the future.