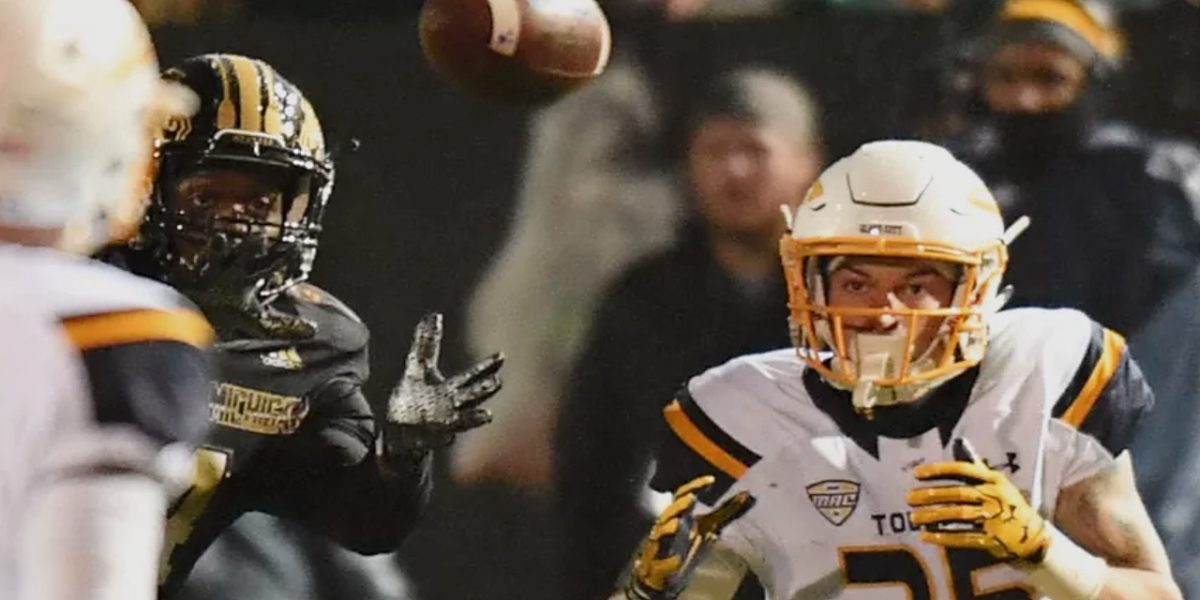 Cody Thompson is a wide receiver from Toledo who has been preparing his entire life for a shot at the NFL. His journey wasn’t always easy, but he’s leaving Toledo with his name in the record books and is looking to have the same mark in the pros.

Cody actually hasn’t played wide receiver his entire football career. As a high school sophomore, he played receiver, but from junior year on he played quarterbacks in the teams spread offense. It wasn’t until college where he transitioned back to wide receiver, something he had no qualms with.

“It wasn’t difficult honestly just because when I got the opportunity to play receiver my one year in high school I fell in love with the position and I knew I wanted to play there.”

“My experience gives me the perspective of a quarterback as well and understanding what they’re looking for and how they’re reading defenses. Like sometimes I think I’m open but sometimes I’m not because the quarterbacks at a different angle and has a different read on it. I think it helps me a lot from a mental aspect.”

Cody has played all over the field at Toledo. He prides himself on his versatility and ability to play all over the field. Switching between the slot and the outside isn’t an easy task either because the nuances of the game change.

This versatility will certainly appeal to NFL teams. Teams like the Steelers love having receivers who are versatile and can wear many different hats.

Cody is prepared to take on this role and has been working on improving his game to be ready.

“I’m always trying to improve all aspects of my game and become a more complete player, the biggest thing at the next level is making those contested catches. Getting those 50/50 balls, being able to catch the ball over the middle in traffic. I know I was able to do that successfully at a high level in college, but in the NFL the windows get smaller, the plays come quicker. I’ve just been really zoning in on the little details of my game.”

Working on these details will be crucial for Cody at the next level. He isn’t the receiver that will take the top off and kill you with speed, rather his game predicates on precision and route running. This is highlighted by his testing numbers at the combine. While his 40 time of 4.57 is average, his shuttle times are what really stand out. He ran his short shuttle in 4.03 and his long shuttle in 11.39.

For those unaware, the shuttle drills are used to evaluate quickness and balance. Both drills test a player’s elusiveness and change of direction skills- while the short shuttle tests explosion in short areas, the long shuttle tests endurance. Cody Thompson’s elite shuttle numbers, both of which tied for the number one fastest time among wide receivers at the combine, support that his route running will be the key for his game at the next level.

Route running is about precision, and Cody is also a believer than much of that precision comes from your preparation.

“I’ll initially just watch how a team plays, how they react to certain things, formations. But then ill really settle get down and look at the corners and safeties, their tendencies and how they play certain things, their coverages. See what their tells are, then what they do well and things they don’t do well. Try and see what parts of their game they struggle with. Just get a feel for them and see what their weaknesses are and try to use that to my advantage.”

Film study doesn’t always involve watching your opponents, players also watch film of players that they look up to in order to learn and improve their game.

“I watch a lot of (Adam) Thielen. I like the way he play, he’s aggressive, he makes those contested catches, and he plays across the middle. he’s not the fastest guy on the field at all times but he uses what he’s got with his savviness and his size to get separation and make plays. He’s proven that he’s dominant and a top ten guy in the league. And studying him and a few others, as I’ve been training I’ve learned a lot from him in watching almost every snap and target he’s had over the past few years.”

Cody’s most famous play of 2018 didn’t even occur on offense, however, it did involve him catching a ball. Playing against the Virginia Military Institute, Cody had a blocked punt for the ages.

Cody walked me through the play and broke it down.

“We had our punt block called, and whenever we get that opportunity we’re excited cause we expect to block every punt. There were two of us going for the block, me and tight end Reggie Gilliam, and really credit to him. I came over late and he was head up on the tackle. He blocked down hard and ran right through him and opened a window. He occupied the tackle for me and I just got free and everything slowed down at that point. The ball went right off the foot into my stomach and I ran it in. “

Often times special teams ability can be the reason a player makes an NFL roster so I’m sure teams are well-are of the value Cody brings.

The punt block wasn’t Cody’s only landmark moment in 2018, he also managed to set the Toledo record for career receiving touchdowns. The game where he set the record wasn’t exactly a fairy tale story, however.

“I was pretty mad actually because we lost that game so I didn’t really care about the record.”

The record was set on October 9th versus Eastern Michigan. While Toledo managed to come back from a 28-3 deficit, they failed on a 2 point conversion that would have won the game

“In that game we played terrible in the first half and we were down 2 or 3 scores, then we came back and scored and on a 2 point play it was a botched play, we had the wrong motion and I was just really frustrated and upset after. I wasn’t really concerned about the record at the time, but afterwards I was pretty happy about it.”

I appreciate Cody’s honesty there and frankly found his answer refreshing. Given the Antonio Brown drama, it was nice hearing that a player was upset after a loss despite having a good performance and breaking a school record.

This speaks to Cody’s character. His heart and work ethic are things that nobody questioned, especially given the fact that he missed his entire 2017 season due to a leg injury. A situation like that helps shape a person, and Cody made sure not to waste all his time feeling sorry for himself. He understands the importance of hard work and seizing an opportunity.

“Whatever you’re gonna do, whether its football, school, personal, business, give it everything you have cause you never know when somethings going to be taken from you and you don’t how often opportunities are going to come. If you’re not going full into it, then you’re just wasting your time and the time of others around you. If you’re gonna be doing it, and putting time into it, you might as well put in everything you have. You have to be honest and real with yourself, and be prepared for anything you might face.”

Looking forward to his pro career, Cody seems like a player who would fit well with the Steelers. The team has expressed interest too – wide receivers coach Daryl Drake attended Toledo’s pro day and took time to speak with Cody.

“Yeah I talked with him (Drake). He pulled me aside after one of my routes and explained something that I did and something I could’ve done a bit better. Before we had some time just getting to know each other, telling stories and stuff like that. He was a really good guy.”

Cody’s versatility on offense, special teams ability, and character all point to a player that’s a perfect fit for Pittsburgh. He’s the ideal player that rounds out a roster and will do anything he can to help a team.