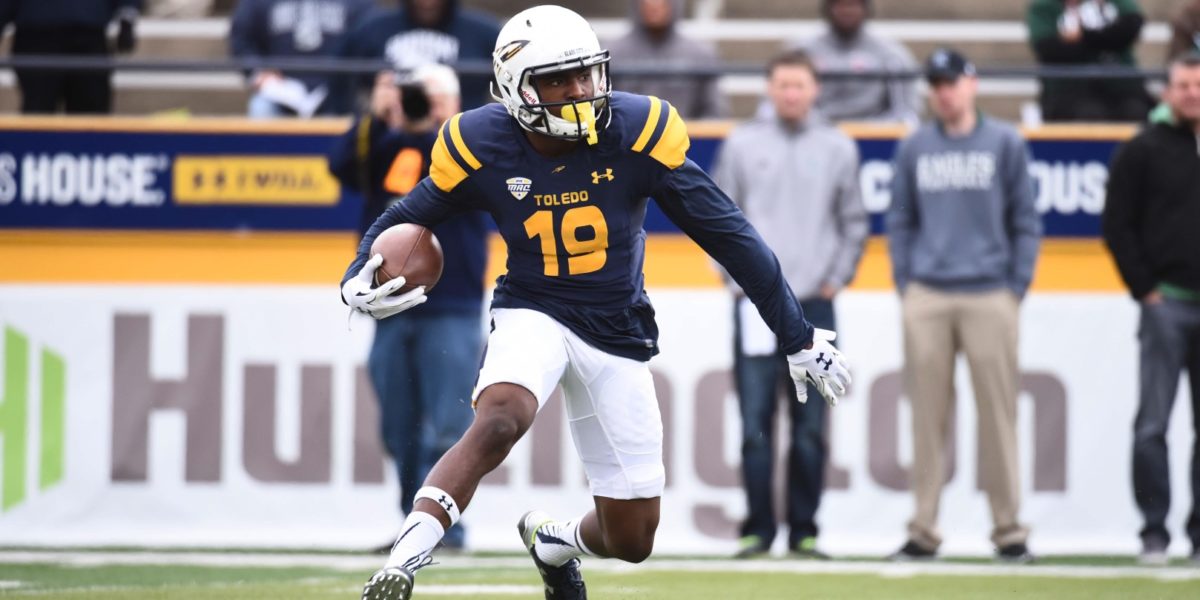 Steelers draft wide receiver Diontae Johnson in the third round

Having traded pick no. 52 to acquire Devin Bush, the Steelers first selection on day 2 was with pick no. 66. With it, the team surprised many by selecting Toledo wide receiver Diontae Johnson.

While an intially shocking pick, Johnson could be a special player in the Steelers offense.

With the 66th pick in the 2019 #NFLDraft, we select WR Diontae Johnson. pic.twitter.com/mFPFkpigLP

Johnson’s strengths include his versatility. He was a major weapon for Toledo in 2018 leading his team with 49 receptions, 761 yards, and 8 touchdowns. He was also an all-conference punt returner.

At 5’10” 183 lb’s, Johnson isn’t the tall and fast wide receiver many thought the Steelers would select in the draft. Rather, he’s sort of an Antonio Brown clone – ironic given that he was select with the pick received in exchange for the disgruntled former Steeler. He won’t be the player who will get jump balls, but he can move around the field and kill you in the open field.

The team already has JuJu Smith-Schuster and James Washington, both of which can out-muscle defenders. Donte Moncrief is there as well who brings speed and can be a deep threat. Johnson will bring quickness and athleticism to the offense that will compliment the existing skill-sets on the roster and makes the depth chart very well-rounded.

While yes, I was initially disappointed by the pick, the Steelers have a pretty good track record at drafting wide receivers. Rather than just regurgitating the information that helped sway me, here are just a few tweets that made me optimistic about Johnson.

My comp for Diontae Johnson was…

Pittsburgh really have this WR drafting thing down.

In selecting WR Diontae Johnson, a reminder that the Steelers are the NFL's best WR-drafting team in the NFL the last 10 years https://t.co/tgsGj75CrO

Looking to his rookie season, the Steelers should be able to bring him along gradually given the wide receiver depth. He can be used for gadget plays to utilize his quickness, but he also should be able to challenge Washington, Moncrief, as well as Ryan Switzer for playing time. His greatest impact may even come as a returner given his pedigree.

All of this said, fans should have feel good about Johnson. Trust the process – the Steelers are good at drafting receivers.