Steel City Underground presents "Steelers Throwback Thursday" featuring plays from recent seasons which you may have forgotten about! Now we're "bringing them back!"

The game everyone believed would be an eventual rematch in a few short weeks in the playoffs was, in fact, a rematch of the previous AFC Championship game.

The Pittsburgh Steelers played host to the New England Patriots at Heinz Field. With both teams sporting the same record, the game was a defacto tiebreaker to determine which franchise would be the number one seed in the AFC playoff picture.

Both teams went back and forth before a Patriots field goal knotted the score at ten-all with just under nine minutes left in the second quarter. The Steelers offense would take the field and begin a massive 15-play, 78-yard drive which ate up over eight and a half minutes from the game clock.

But it wasn't the drive that was the shocker, rather the play which ended it: a play which would come from a player who was once on the brink of super-stardom but had fallen from grace as the season progressed. That player wass Steelers WR Martavis Bryant, who came up huge when his number was called that afternoon.

Running a drag route across the end zone, Bryant's arm is held (nearly pinned behind his back) as QB Ben Roethlisberger lofts a pass that looks more like a basketball alley-oop than the laser beam precision we're accustomed too.

Even with only one arm available to catch the ball, Bryant makes an unlikely single-handed reception to put the Steelers ahead 17-10 before the half.

The best part of the play was what transpired after it.

JuJu Smith-Schuster returned this week after being suspended for one game after a crushing block on Bengals LB Vontaze Burfict:

Feeling that Burfict is a bigger violator of rules and that he was unfairly punished for the taunt following this block, Smith-Schuster made it known that he was all business upon his return. Bryant leaves the football to the side (later spiked by G Ramon Foster) and lays motionless on the turf as JuJu recreates the "crime scene" from his Burfict hit! 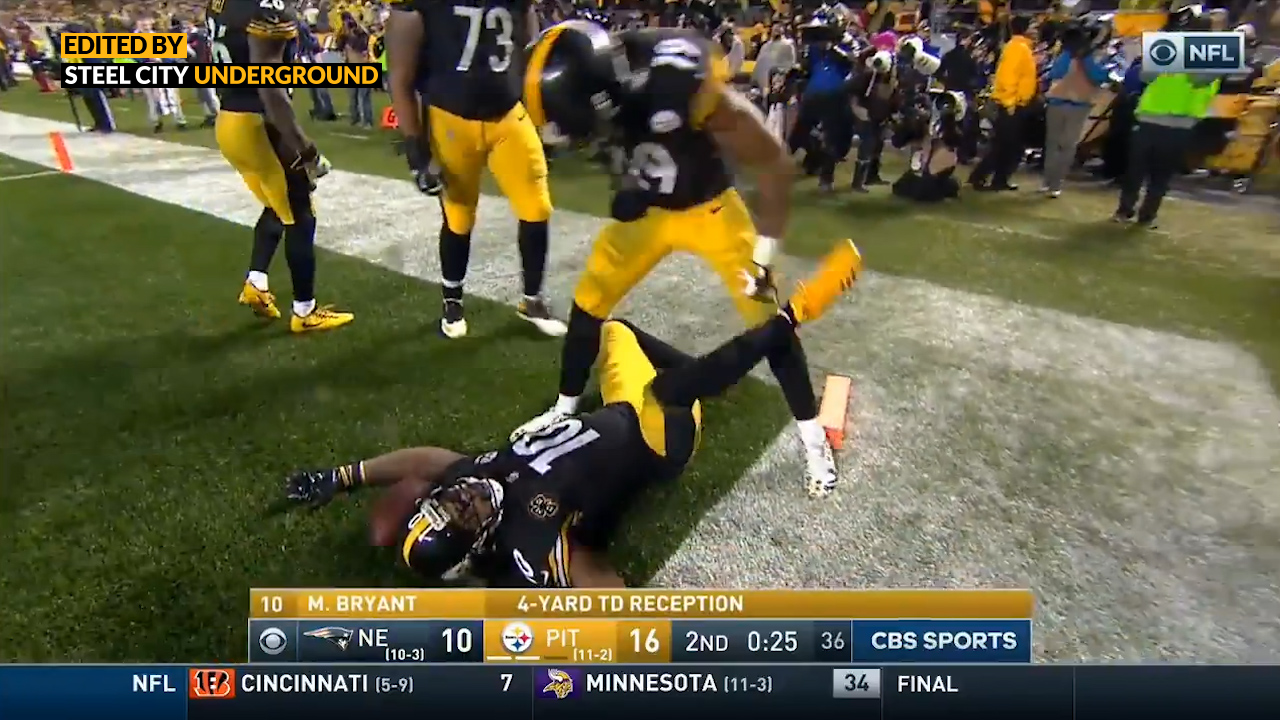 An annual tradition here at Steel City Underground is to analyze the Steelers current roster and come up with some ...

During the modified 2020 NFL training camp, Steel City Underground will be bringing Steelers Nation reports on positional groups while ...

More coronavirus concerns for the Steelers?

Ramping-up dates, COVID-reserve lists, non-contact drills and opt-out clauses. What does all of these coronavirus precautions mean for the Steelers? ...

Leave it to Pittsburgh Radio personality Andrew Fillipponi to swat the hornet’s nest in Steelers media. From social media to ...