How many games could the Steelers realistically lose in 2019? | Steel City Underground

Let them play the games!

However, I’m sure you’re irritated by recent comments made by NFL Network analyst Maurice Jones-Drew, predicting a rather grim season for the Pittsburgh Steelers. In his analysis, MJD thinks that the Steelers won’t even be a .500 team in 2019!

Quite the prediction for a head coach and a future Hall of Fame quarterback who have never had a losing season!

Yet, this gets us talking about “what if’s”. Despite it being June, I wanted to go through the Steelers schedule and make my own predictions on plausible records at the conclusion of the 2019 season.

Here are my thoughts.

Do understand a lot of this is “on paper” so some teams could look better now, than what they may end up being at the end of the season. Consequently, a team could be the opposite too, so I didn’t want to put “wins” and “losses” in a column. Rather, I wanted to stick with some ebbs and flows, and also try and predict a few games/patterns within the schedule.

The most optimistic start to the season would have the Steelers go on the road and beat the New England Patriots during their Super Bowl ring ceremony to start the season. No short feat for any team, but the Patriots are also slow starters in September and generally drop 1-2 games for the proverbial “is this the end of the dynasty” talk that always fizzles by December.

I could see the Steelers starting out 3-4 in this view as well. The trip to San Francisco or a revamped Bengals team could trip them up for the first time in 2019.

Then it’s some games that may be tricky to predict.

The Ravens and Chargers were both playoff teams last season. Going to LA doesn’t bother me in the slightest for a Sunday Night Football game, and the small soccer stadium should be filled to the brim with Steelers fans. I would expect the Steelers to split the Ravens and maybe even the Bengals or Browns to finish as AFC North Champions with a 4-2 record within the division.

When that happens is a matter of discussion. The Steelers have swept the Bengals and mostly the Browns too for as long as I can remember. They could do better, or worse, within their own division.

Games against the Dolphins and the month of December could be favorable. In this scenario I see some trouble with teams like the Colts or Rams, but perhaps a win streak that goes all the way until Week 17 when their 11-4 record is already good enough for the division crown and a specific playoff seeding.

Okay, this isn’t much more “realistic” since I already added a dose of optimism above.

This approach assumes the magic number of 11 wins to secure a spot in the postseason. As we saw last year, anything less could mean you’re watching from home in the month of January.

I do think the Patriots will be a handful, but realistically, until I can see what Cleveland really is this season, do we have any doubts that the Steelers could sweep the Browns and/or Bengals again? 5-1 in the division wouldn’t be hard to fathom, but of course, 4-2 is the more realistic number (as noted above).

I think the trip to San Francisco could be interesting as the Steelers never fare too well on the West Coast. The 49ers, like the Browns, are another team we need to see more of. They have the pieces, but can they put them together?

The Colts and Rams games are still part of my thought process here, but with a bye and then three in a row at home, I like to believe the Steelers come out on the better side of that.

The Thursday Night game in Cleveland could be brutal on the short week, and Thursday games never favor the road team.

However, I am still not placing a lot of faith in the backend of the schedule. I don’t see the Steelers being swept by the Browns, and don’t see a big challenge (at this time) coming from the Cardinals, Bills, and/or Jets.

Think about it: the final five games feature rookie or second-year quarterbacks who are still unproven... in a quarterback driven league! (Do you really want to bet against Ben Roethlisberger here?) The Steelers look to face Baker Mayfield, Kyler Murray, Josh Allen, Sam Darnold, and Lamar Jackson in the final five weeks of the season. Depending on the Ravens identity by Week 17, that too could be a wash or a challenge, but I have to consider the odds are in the Steelers favor for the home stretch in December. 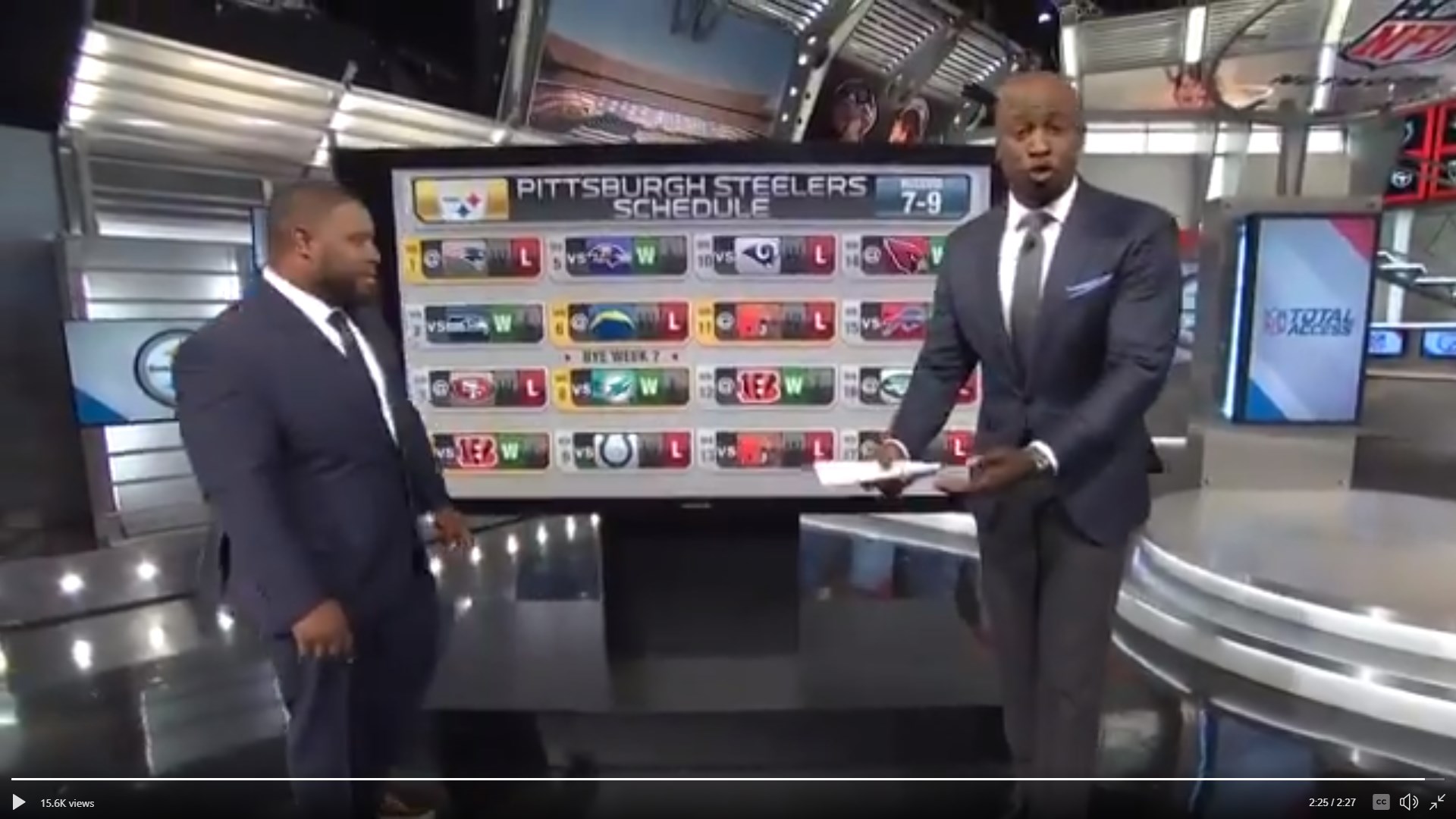 In the event you didn’t see MJD’s predictions for the Steelers season I’ve included the clip below.

If MJD could’ve picked the Steelers to go 0-16 he probably would have!

Getting swept by Cleveland is pure fan fiction at this point. The Steelers fell apart at the end of 2018, but what have they really lost since? An aging drama magnet wide receiver? And… ???

Le’Veon Bell wasn’t there last season. I’m tired of hearing that narrative. His replacement, James Conner, was a Pro Bowl selection as is Antonio Brown’s heir JuJu Smith-Schuster. Add a true CB2 in Steven Nelson, a leaner James Washington, and first round pick Devin Bush, and you could argue that the Steelers have gotten stronger.

Has anyone else in the AFC North? The Ravens and Bengals are both in rebuild mode, while the Browns added a lot of flashy names to their roster, but still couldn’t overcome the Steelers or Ravens after Hue Jackson was fired and Mayfield was named starter.

The comparisons make me weary of MJD’s thinking that the Steelers will get swept by Cleveland and go 3-3 in the AFC North. I just don’t see either happening, even with the lowest of expectations.

The lowest of the low has me going to back to a .500 record, in line with Tomlin’s worst seasons. I don’t subscribe to the Chargers night game as a “west coast trip” problem since it’s a night game and more in line with the team’s sleep and travel schedule. The 49ers could pose a problem, and we know the Patriots are always the Patriots.

The Ravens are usually the Ravens too, so I could foresee a split.

But if we’re looking at worse case scenario, all of the previous playoff teams (Ravens, Colts, Rams, Chargers) would issue blows to the Steelers. They could start slow and have to rebound following the bye week. They’ll have tough sledding with the Colts and Rams back-to-back before the Thursday night game in Cleveland, where they could drop three more games and then have to win-out to have a shot at the playoffs.

And despite my claims that the December schedule looks soft, winning all of those games in a row is a difficult task in the NFL.

Still, the Steelers should be in the conversation at least and I see 8-8 as the absolute worst case scenario for the 2019 season.

The addition of Odell-Beckham Jr. to the Browns, Lamar Jackson taking over the Ravens and a new head coach in Cincinnati has all but overshadowed the Steelers moves this offseason. A defense which as been in the top ten over the last few years has potentially filled its weaknesses with the additions of Bush, Nelson, and Mark Barron.

The really big loss is AB on offense, but Ben Roethlisberger attempted his most passes ever in a season in 2018, resulting in a league-high 16 interceptions. Without forcing the ball to Brown and removing off-field distractions, plus alterations to the coaching staff and an influx of new blood, do we really envision the 2019 version of the team to be worse than 2018?

Could Nelson be worse than Artie Burns or Coty Sensabaugh were? Do we think Barron will be worse than Morgan Burnett? Devin Bush worse than L.J. Fort or Jon Bostic?

Do we think Brown’s departure is any different than when Pittsburgh parted ways with Santonio Holmes or Mike Wallace?

I don’t think the players are sweating the low-key coverage of their team and believe they’re fueling their tanks to prove everyone wrong in an underdog, comeback role in 2019. All I can say is, I can’t wait to say MJD “I told you so” when his predictions fall flat of their mark.

It’s that time again folks, where the leaves are ready to fall and many young men will be out of ...

Join the host who has issues with bread and bread type products on this edition of the Steel City Underground ...

It's that time again! Joe Kuzma flies solo as he takes a stab at predicting the Steelers initial 53-man roster ...