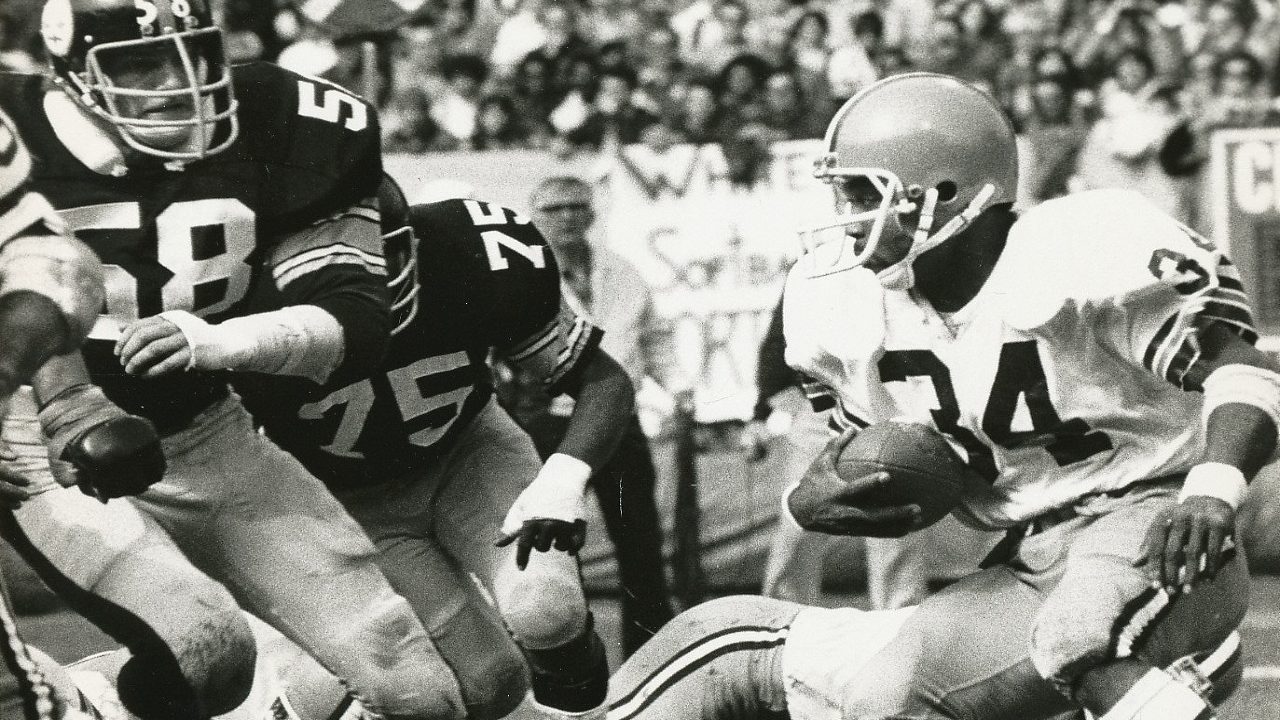 Steelers Fan Friday: Could the Pittsburgh, Cleveland rivalry heat back up?

Welcome to Friday and the official beginning of summer, Steelers fans. To kick off the beginning of the weekend, it felt right to address an ongoing discussion surrounding the rivalry between the Pittsburgh Steelers and Cleveland Browns. There’s plenty of scuttlebutt among NFL fans on social media threads talking about how Cleveland is going to have Pittsburgh’s number this coming season. There’s also a lot of talk about how the path to the AFC Championship no longer leads through the AFC North because it was meant to be last season (2018) and didn’t happen as predicted. In the past, the Steelers/Browns rivalry had plenty of heat, and it’s time to ask if it could heat up again in 2019.

A blast into the past

Before we can realistically analyze the current buzz, it’s important to look at the Steelers/Browns rivalry of the past. Cleveland held a 31-9 series advantage through the first two decades of the rivalry (1950s-60s). Things changed in the 1970s. The NFL listed the December 3, 1972, game between Pittsburgh and Cleveland at Three Rivers Stadium as one of the greatest Steelers games prior to 1974 in their book, “Great Teams, Great Years: Pittsburgh Steelers”.

Two weeks earlier, the Browns had bested the Steelers, 26-24, at Cleveland’s Memorial Stadium. Franco Harris, a rookie, took off on an explosive 75-yard run to put the Steelers ahead, 24-23, in the fourth quarter, but as head coach Chuck Noll was quoted as saying, “(The Steelers) started celebrating and stopped playing.” Placekicker Don Cockroft would seal the win on his second field goal attempt.

Entering the Dec. 3rd game, Cleveland was 8-3, tied for first place in the Central Division with the 8-3 Steelers. The Steelers had seen their fair share of seasons slide into obscurity, so it isn’t surprising that Pittsburgh had a quote from Browns defensive tackle Jerry Sherk stating he was “not very impressed” with the Steelers on a locker room bulletin board or that Noll had circled in red ink a clipping from a Cleveland sports column that called the Steelers “overrated” and wrote, “Read This.”

“I always respected the Browns before, but I lost a little respect for them for what they’ve been saying the past two weeks about us.” – Joe Greene

Linebacker Andy Russell said, “This is the biggest game I’ve ever played in,” which was a major statement considering he’d been involved in the famed final game of the 1963 season against the New York Giants that could have earned them their first divisional title since the 1947 team entered the Eastern Divisional playoff against the Philadelphia Eagles. “This is the whole season in a nutshell,” Russell continued. “A lot of guys hung on just to get this shot. Now we’re at a point where we can right everything for all the bad years.”

To that point, the Browns had won assorted championships, but not the Steelers. Three Rivers Stadium filled with hard-working blue-collar fans, many from the mills, ready to cheer the black and gold on with Iron City in their hands – something they had to smuggle past the gates at the time. “I never heard anything like it,” linebacker Jack Ham said of the crowd noise. The Steelers, as a team, were determined not to let their fans down.

Whether it was Henry Davis disconnecting Bo Scott from his chinstrap and the ball (the fumble grabbed by Russell), Jack Ham intercepting Mike Phipps, the four sacks the Steelers defense collected, or three forced fumbles (three recovered), Pittsburgh – as a team – was determined it was not going to allow the Browns to win. On offense, Harris became the workhorse; he needed just 35 more yards to earn his sixth consecutive 100-yard game and tie Jim Brown‘s record. “I’d be dishonest if I said I didn’t appreciate the way they kept giving me the ball so I could tie the record,” Harris said after the Steelers spent the entire fourth quarter feeding him in front of Franco’s Italian Army in the stands. The Steelers recorded their first shutout since the 31-0 game against the Giants (1963) and held the Browns to just 76 yards of total offense.

The 1970s began the Steelers’ march towards destiny and evened the playing field with the Browns. The rivalry had continued to grow into a hostile event; in a 1976 matchup, Joe “Turkey” Jones slammed Terry Bradshaw to the ground, the sack causing a neck injury to No. 12. The Steelers would finish the 1970s winning seven straight games with the Browns and add Super Bowl XIII and XIV wins to go with their earlier wins in Super Bowl IX and X.

After swapping victories throughout the 1980s, the Steelers became more dominant. Since 1988, the last time the Browns were able to sweep the series, the Steelers have taken over the lead in the all-time series, 72-58. The Steelers would add a 29-9 win in the 1994 divisional playoff game (the first time the two teams had met in the postseason). When the league allowed the Browns to move to Baltimore in 1999, many NFL fans feel that the two teams haven’t had much of a rivalry, especially considering that after their reactivation in 1999, the Browns have not been a very competitive team. In 2003, the Browns won their first and, as of 2018, only game at Heinz Field.

Could 2019 be the year the rivalry heats back up?

If NFL fans and even NFL experts are to be believed, the “Turnpike War” may just be restored to its previous glory. The Browns and Steelers split their series in 2018, and suddenly there is a vibe in the air that Baker Mayfield and Odell Beckham, Jr., is a duo that will put Cleveland in Super Bowl contention in 2019. To do that, they’d have to get past Pittsburgh who lost Antonio Brown (Oakland Raiders) and allowed Le’Veon Bell to continue his sit-out all the way into free agency with the New York Jets. That means they’re overlooking what the Steelers already have and what they’ve added. The pundits all loved Cleveland’s NFL Draft, giving them mostly positive grades, not to mention their offseason moves.

All of this is perfect for those in the Dawg Pound who have continued to loathe Steelers Nation and vice versa. You can bank on the fact that even if the teams did absolutely nothing on the field, the two fan-bases would be fired up over renewing hostilities that often spilled over into the stands at both teams’ stadiums. The league is loving it; they’ve scheduled the Steelers and Browns to go head-to-head in two prime TV games this upcoming season.

Adam Rank, of NFL.com, wrote the following in March 2019 about the NFL’s top five rivalries in 2019:

Before you accuse me of just jumping on the bandwagon and supporting the Browns after a wild offseason, let me say a few things. For starters, you are absolutely correct. I love what the Browns have done…this Browns team is going to be a lot of fun… the rivalry got some additional juice in Week 17 of last season. No, the teams didn’t play each other, but the Browns could have sent the Steelers to the playoffs with a win over the Ravens. Cleveland fell just short, leaving Pittsburgh out of the postseason tournament for the first time since 2013… there will be no in between with these two. Either the Browns fulfill their destiny this season and win the division in convincing fashion, rollicking past the competition while the Steelers fall into further chaos. Or the Browns finish 5-11, while the Steelers claim the top seed in the AFC. I’m telling you: It’s one or the other.

My issue with all the hype is the fact that Cleveland still has a ton to prove. Adding pieces to a team – or losing them – doesn’t equate to anything until the season kicks off and fans get to see how those pieces fit into the puzzle. Mayfield is exciting at times, but he doesn’t have the numbers that Ben Roethlisberger has, or the experience. Beckham is flashy, but so is JuJu Smith-Schuster (and one of them is a lot less dramatic in a negative fashion – ask the Giants). Both teams have bulked up their defenses and set up their offensive backfields with rushers that can grind out yardage. If anything, these two teams will be more interesting to watch face-off than in past seasons just for the sake that they’re both playing for wins in the AFC North and a potential title. Giving all the props to Cleveland, though, is silly at this point.

Let’s see what happens in the opening weeks of the 2019 regular season as Pittsburgh and Cleveland play other opponents before making a judgment call declaring one or the other the dominant force. After all, the Steelers and Browns will play in the middle of a season with opponents book-ending those meetings; some of those teams are primed for their own push for a Super Bowl berth.

I am all for renewing heavy competition between two teams that form one of the oldest rivalries in the NFL. I’d love for both Pittsburgh and Cleveland to have seasons to be remembered. And I absolutely am ready for the fans to get into it as well. Will this rivalry heat up in 2019? I’ll let you, the fans, discuss the possibility.