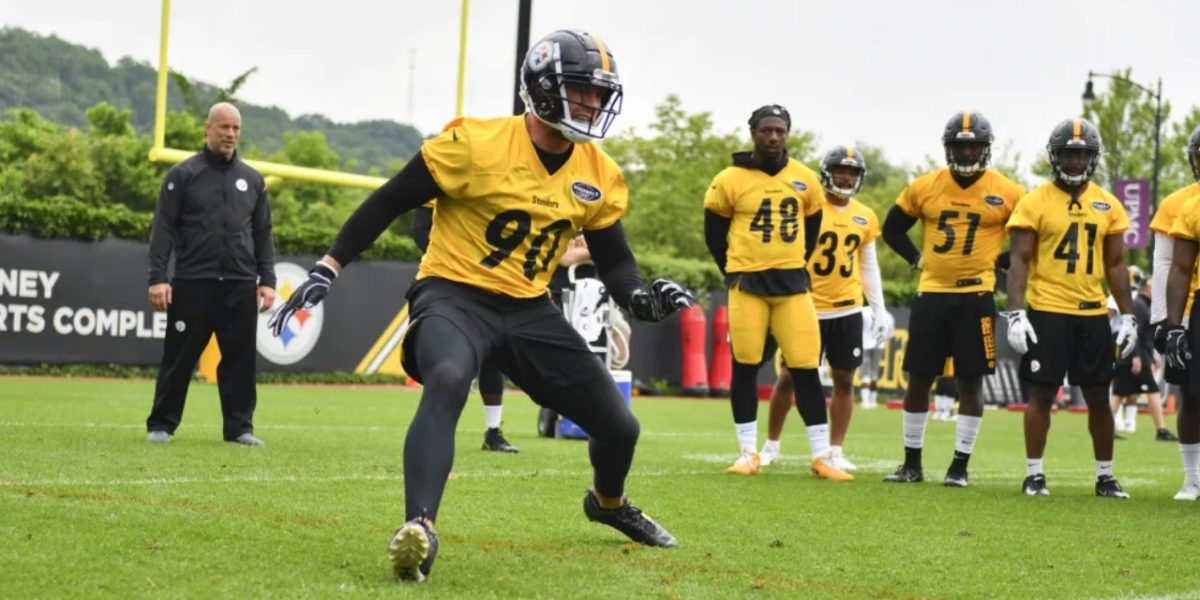 What to watch at Steelers Training Camp: Outside Linebacker

Training camp is right around the corner, and the Pittsburgh Steelers will carry 91 men into camp this year. How do you know who to watch? What position battles are key? Who are we looking to keep an eye on? Over the next couple of weeks, we will break down some of the most hotly-contested position battles for you to know where to focus. These articles will contain no predictions and no sort of outcome, just a simple what to look for. Consider this your guide to camp. Let’s have some fun!

The outside linebacker position seems pretty vanilla at first glance, and may already even be set on who’s making the 53. The four returning players are the four most likely to be on the team this season. However, there are a couple of intriguing things to keep an eye on this summer. What are they? Well, I’m glad you asked. Let’s get into it.

We begin with T.J. Watt. A budding superstar and one-third of the trio of Pro-Bowlers from the 2017 draft class (JuJu Smith-Schuster, James Conner), there’s not much to detail about Watt’s progression. From Week 9 till the end of the season in 2018, Watt scored a 90.0 pass rushing grade from Pro Football Focus (second only to Von Miller of the Denver Broncos). When it comes to him this summer we are looking at one thing, health. Keep him fresh and keep him healthy and let him shine.

Bud Dupree is going to be somebody to keep an eye on. He hasn’t lived up to his first-round draft status, but 2018 was his best season to date. He’s been working with Chuck Smith, the pass-rush specialist, this offseason to improve his game. Mostly you can find videos of him getting around the edge and improving his bend to prevent being ran up the arc. In the past, too often tackles would simply run him up the arc, forcing Dupree to overrun the quarterback and take himself out of the play. He was very stout against the run, and at the very least should be a solid starter this season. He will be playing for a contract this season as well, so it’ll be interesting to see if he puts up his best numbers to date.

Behind him is Anthony Chickillo. Drafted the same year out of Miami, Chick is a converted end that has been a special teams ace and solid in spot starts. You know what you have with Chickillo, and despite what some may say, he’s a player you want on your team. What’ll be most interesting will be to see if he can hold of Ola Adeniyi for the top reserve spot.

Olasunkanmi Adeniyi was a preseason darling last season, rightfully so. He finished the preseason with three sacks and two forced fumbles, not to mention absolutely man-handling a Tennessee Titans tight end, using leverage and hand usage to toss him aside and make a play on the running back in the backfield.

The more I watch Ola Adeniyi the more I think this man is going to have a big impact this season. pic.twitter.com/juhgYAhFV4

There’s no question that he can be an effective pass rusher in this league, but the Steelers ask their linebackers to drop into coverage more than most teams, and there are concerns about how he can play in space. At the very least he can be used as a pass rushing specialist in the same way the Jaguars and Rams used Dante Fowler; at the best, he could push Chickillo for the top reserve spot this season.

When it comes to the depth at the position, there are three athletes. J.T. Jones signed with the Atlanta Falcons last season (and spent time on the roster with the Atlanta Legends of the former Alliance of American Football as late as March 2019) and showed a lot of fight and great leverage throughout the Falcons’ 2018 preseason. He didn’t put up impressive numbers in college from a pass rushing standpoint, but is a high motor player that could be a nice surprise in camp with the Steelers in 2019.

Robert Spillane spent last season on the Titans practice squad and got in on two games. He played college ball at Western Michigan, recording 10 sacks. However, he has played his career as an inside linebacker, so this will be his first time using his pass rushing chops on the outside.

Finally, there’s Tuzar Skipper. During his final season at Toledo, he recorded 60 tackles, 11.5 for loss and 8.5 sacks. A torn ACL ended his previous season. Long and strong, he doesn’t have top-end athleticism, but enough strength and knowledge to make an impact in the preseason.

Ultimately, the trio of Jones, Spillane, and Skipper are likely fighting for a practice squad spot. Do not be surprised if the Steelers dip into the free agent pool before camp to add competition to the back of the roster at the outside linebacker position, and keep the players at the top fresh and healthy.

Overall, as straight forward as it may seem the position is, there is a lot to look at for the future this summer. Who are you most excited to see?