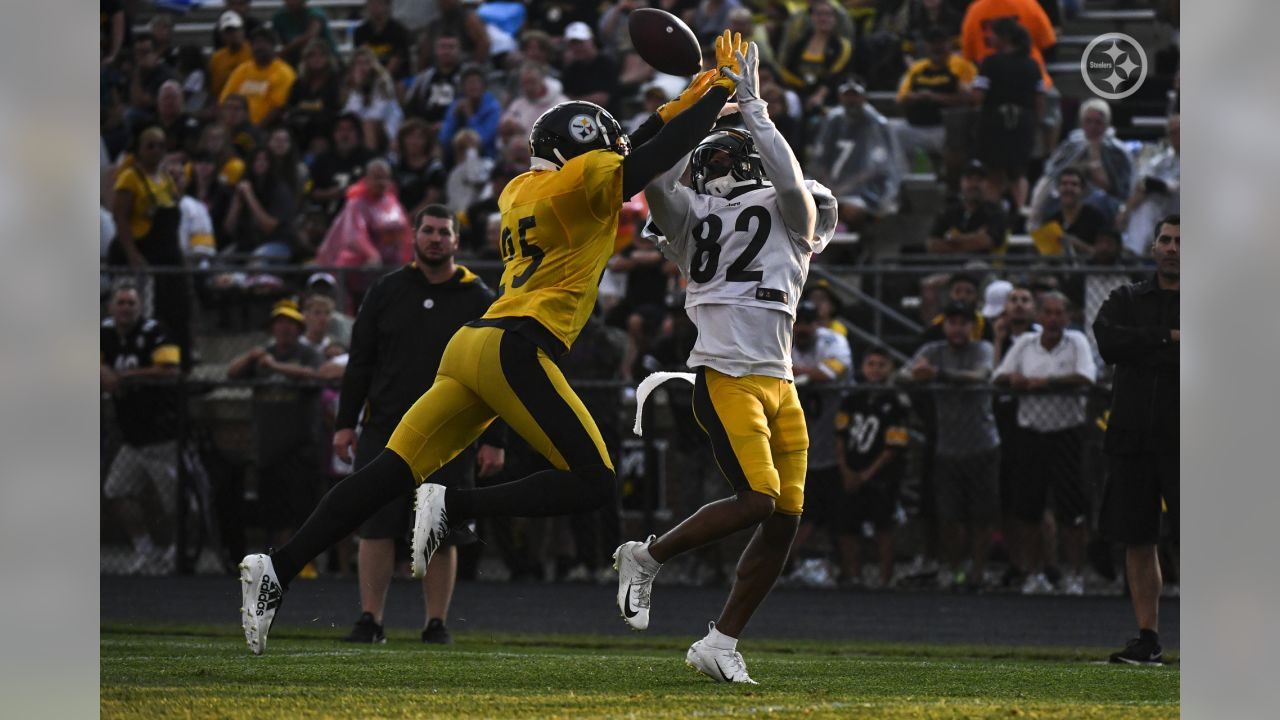 More standouts from the second weekend of Steelers training camp

The Steelers organization has done a tremendous job with fan service during training camp, bookending Friday Night Lights at Latrobe Memorial Stadium with the Heinz Field Family Fest: the “meat” in the middle of this sandwich is a short trip to Saint Vincent College, the usual home of the Steelers in late July and early August.

Over this period of time some younger players will have more opportunities to standout as veterans take a privileged day off and others heal injuries sustained during practices and otherwise. It’s during this second weekend that I was able to observe even more from these younger players vying for their place on the roster.

Here are my latest takes of who stoodout on this second weekend of Steelers training camp.

It was difficult to observe the defense on the far field at Saint Vincent’s last week, but this time around, the stage was set on Friday for an up-close and personal look at Pittsburgh’s defense.

Among those who have been getting praise this training camp is Adeniyi, a second-year undrafted outside linebacker who reminds many of the player who wore the #92 jersey prior.

I got a much better look at Adeniyi’s dominance in backs-on-backers, plus different drills against offensive linemen. His movements are fluid: while his physical measurements didn’t get him noticed in the NFL Draft, his fundamentals are so pure and fluid that he’s routinely beating his matchups.

I’m excited to see what Adeniyi will do when the Steelers kickoff the preseason this Friday against the Tampa Bay Buccaneers.

I was hesitant to crown Spencer what Tunch and Wolf would call a “camp phenom”. The former CFL All-Star got some extra reps due to Donte Moncrief sitting out, as well as JuJu Smith-Schuster getting a veteran day off… and he made the most of it.

Spencer is fast, shifty, and has mostly good hands where just about anything thrown in his direction, even for his smaller size, is a contested ball.

And he’s winning most of the contests too.

His other talent is that of a returner and he also have the vision to get upfield… and fast.

If it weren’t for the logjam of receiver talent ahead of him on the depth chart I would be making a case for Spencer to be on the 53. Unfortunately it may take an injury or other move for him to slide up the depth chart. (If this were a season or two ago, he could’ve been a shoe in to make the team.)

The second-year lineman still needs some work, but is showing the instincts and tenacity to be a starter in this league. I’m loving every moment of watching him, as he was one of few to actually slowdown (not entirely stop) Ola.

Okorafor being the primary swing tackle behind the starters this season shouldn’t surprise anyone: he looks that good.

I don’t get to see much of this veteran and it’s odd a guy entering his sixth NFL season would show up as a “surprise” on any list, but the 6-7, 352 lbs. defensive tackle is really beginning to develop into the monster his size dictates he should be.

He’s not in for a lot of snaps, but one observation made during Friday Night Lights saw McCullers completely steamroll his blocker into the ground. (I dare say he buried him six feet under.)

More of the same would be incredible to see from “Big Dan” going forward. I have every reason to believe he’s finally turned the corner under defensive line coach Karl Dunbar and we could see the 26-year-old around for many seasons after 2019.

If this were any other season, such as the one where the Steelers had Zach Mettenberger as their their third quarterback on the roster, I’d also believe Hodges could make the roster.

Unfortunately he’s behind passers with NFL seasons under their belt and draft capital invested in them.

Hodges has a laser of an arm: the ball comes out quick and often hard. I’ve seen receivers actually drop passes because of not being prepared for his delivery.

He doesn’t come off as the most agile runner, but is capable of moving slightly in the pocket to adjust and get rid of the ball. I’ve even seen him rip off a run… not as fast as Joshua Dobbs, but he gets the job done.

Hodges awareness, plus his ability to run through his progressions and make intelligent decisions with the ball should make him a target for some team. I doubt the Steelers would roster another quarterback on the practice squad, but Hodges is more than deserving of a chance somewhere in the league, if that opportunity doesn’t manifest itself with the Steelers.