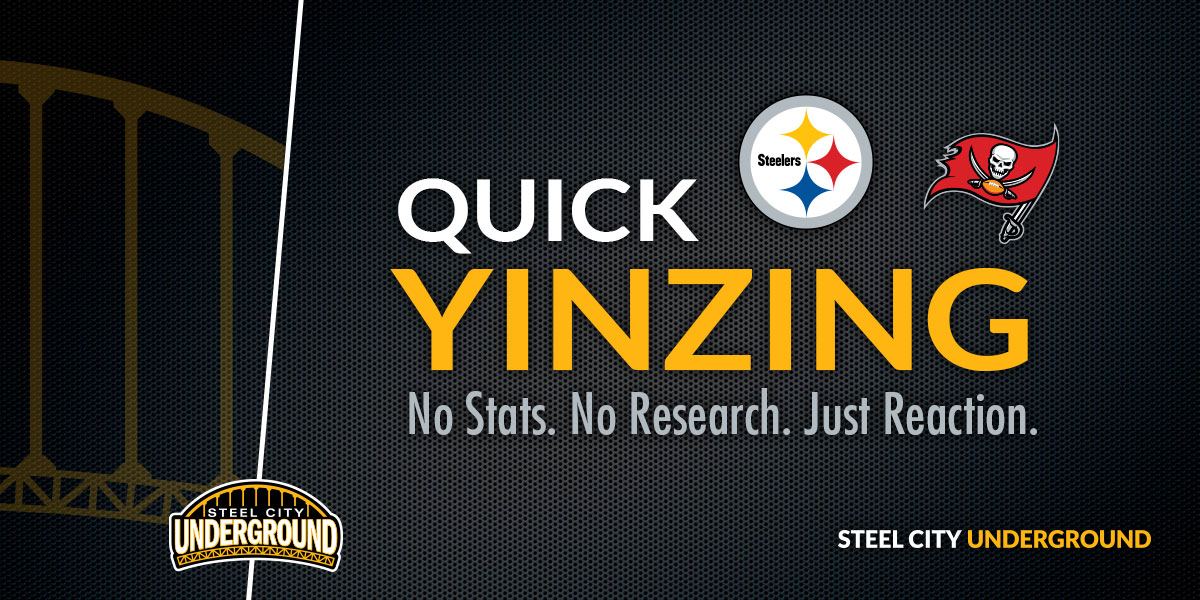 Quick Yinzing: Immediate reactions from the Steelers win over the Bucs

Welcome to “Quick Yinzing”, a fast reaction article where a member of the SCU staff gives their initial post-game impressions without digging into any films, major stats, or other deep analysis. It’s as real as that car ride home or sobering down at the bar following the game!

Steelers football is back! After a long and tumultuous offseason, the pads went on and the Steelers got to hit somebody other than themselves. Here is the immediate reaction to what we saw.

Joshua Dobbs didn’t have the best game tonight, taking two unnecessary sacks and throwing an interception that wasn’t thanks to a penalty. He did show off his athleticism on a 36 yard scamper to set up the first score, but couldn’t punch it in. While he did complete a long pass to James Washington, you have to wonder if he led him a little more if Washington walks that ball in to the end zone.

Mason Rudolph played a great game. His pocket presence was phenomenal, moving around to evade pressure and keeping his eyes upfield. Both of his touchdowns were impressive, hitting Washington on the far side of the end zone and then keeping calm under pressure to find Zach Gentry in the back of the end zone. Looks like he is ready to take over #2 duties.

Devlin Hodges looks small out there, but he plays big. He has a tight spiral, albeit not the most zip on his passes. However he does stand tall in the pocket and makes plays with his arms as well as his legs. It will be interesting to see him in some more games.

Benny Snell had an up and down game. A lot of runs got stuffed behind the line, but that’s not on him. Once he got going, as he told us, he got his feet under him and got better with each carry. Showed excellent vision to find the whole and make the cut through it. Finally Trey Edmunds, showed willingness to block with a few chip blocks, lowered his shoulder on runs, and delivered some hits. He did drop his one target in the passing game.

At Wide Receiver, James Washington made his case for targets, catching passes from both Dobbs and Rudolph. Simply put he ran crisp routes, got open, caught the ball. While a favorite of ours here at Steel City Underground struggled with a couple drops in the game, Diontae Spencer. He did come up with two big catches in the fourth quarter, all the while showing off blazing speed on several good returns. Lastly, Johnny Holton made his case today making something happen after the catch on his 59 yard reception, breaking tackles and spinning his way downfield.

Tight end was a quiet position today outside of Zach Gentry. Gentry, by the way, looks massive on the field. Did a good job finding an opening on his touchdown as well as making a defender miss on a screen. The other tight end to stand out tonight was Kevin Rader, but not for good reasons. His fumble while trying to make something happen set Tampa Bay up with the ball around midfield, giving them a chance to tie. His blocking in the game was superior to his play making.

The offensive line seemed to struggle at times today. Both B.J. Finney and Chukwarma Okorafor struggled with penalties and getting beat in the run game today, so we will look for them to clean that up. On the other hand, Matt Feiler and Zach Banner both had solid games. So for Feiler is in line to be the starter at right tackle.

All along the defensive line tonight the Steelers struggled to gain any push in the run game, allowing holes to consistently open up for Tampa Bay. They did hold up blocks on passing downs allowing the linebackers to get pressure however. Overall a solid, not great performance here.

Two things to note on the D-Line, Isaiah Buggs was around the Ball on several run plays and even had a nice scoop and fall on the ball on a fumble recovery. Also, Javon Hargrave played the entire first half, something of an oddity for an entrenched starter. The same thing happened last preseason when he would play in to the fourth quarter in some preseason games. Don’t want to speculate the reasoning as to why.

The pass rush was heavy all night. While the Steelers only landed four sacks, they were in the quarterbacks face all night. Ulysses Gilbert led the team with 1.5 sacks, showing ability to get home from inside and out, as well as showing great instincts jumping a slant route and intercepting the pass on a 2-point conversion attempt. Tuzar Skipper was the other standout, in the backfield almost every play and finally getting home in the fourth quarter. And finally Ola Adeniyi, who everybody had their eyes on Drew the start and got consistent pressure all first half. He didn’t notch a sack but was disruptive all game.

The linebackers played well, if not spectacular. Mark Barron missed a couple tackles on the first series, but settled in nicely from there showing a good nose for the ball. Robert Spillane, the Titans leading tackler last preseason showed just that again today. He was around the ball often and wrapped up consistently, also showing well on special teams. He got beat several times in coverage though, and will need to improve on that. Tyler Matakevich got in the game and was a part of the pass rush, getting in to Ryan Griffin’s face to disrupt a pass. He looked much leaner and quicker tonight, hopefully getting back to his 2017 special teams level of play.

Now the player you clicked on this article to read about, Devin Bush. He ended with 10 tackles, 7 solo, and a pass break up that could have been a pick six. Also notching a fourth down stop he showed the ability to see and hit the hole quickly to knife in to the backfield. And for all those concerned about his size, he was seen tossing linemen around like a rag doll.

The defensive backs did a good job tonight keeping the play in front of them and not giving up anything deep. They did give up a lot of catches underneath, they tackled the catch and didn’t give up many yards after the catch, With a few exceptions.

Justin Layne struggled out of the fate being out of place and with a big missed tackle on the Chris Godwin touchdown, however he seemed to settle in nicely and start to play tighter to his man. Impressive recovery, need that short memory at his position. The other cornerback that stood out was Trevon Mathis, who was impressive for just arriving to town. He was close to his man all night, not giving up big plays, breaking up a pass and showing solid tackling.

Terrell Edmunds showed even more improvement today, with good reaction to break up a would be touchdown to a tight end. It seems like every play he improves. He’s going to be a pro bowl caliber player. The other safeties all showed excellent tackling ability, and a knack for keeping the play in front of them. Kameron Kelly didn’t show the ball skills that he had in the Alliance of American Football, but still was involved in several plays. Marcus Allen got to play some man coverage today, giving up 3 catches in the fourth quarter, but again he followed with the theme of solid tackling.

As for the specialists, they all played well. Chris Boswell seems to be healthy, nailing both field goals with a long of 47 and his lone extra point attempt. Matthew Wright also hit two extra points while kicking a 42 yard field goal, even if it was close.

There was two punts on the night. A 46 yarder from Jordan Berry with great hang time and a booming 64 yard punt from Ian Berryman. Although on the latter I would have preferred to see him try and pin the opposition inside the 20 yard line rather than booming it through the end zone.

Overall it was a solid performance for the entire Steelers roster, and one to build on for next week. Who were you most impressed with?

One response to “Quick Yinzing: Immediate reactions from the Steelers win over the Bucs”