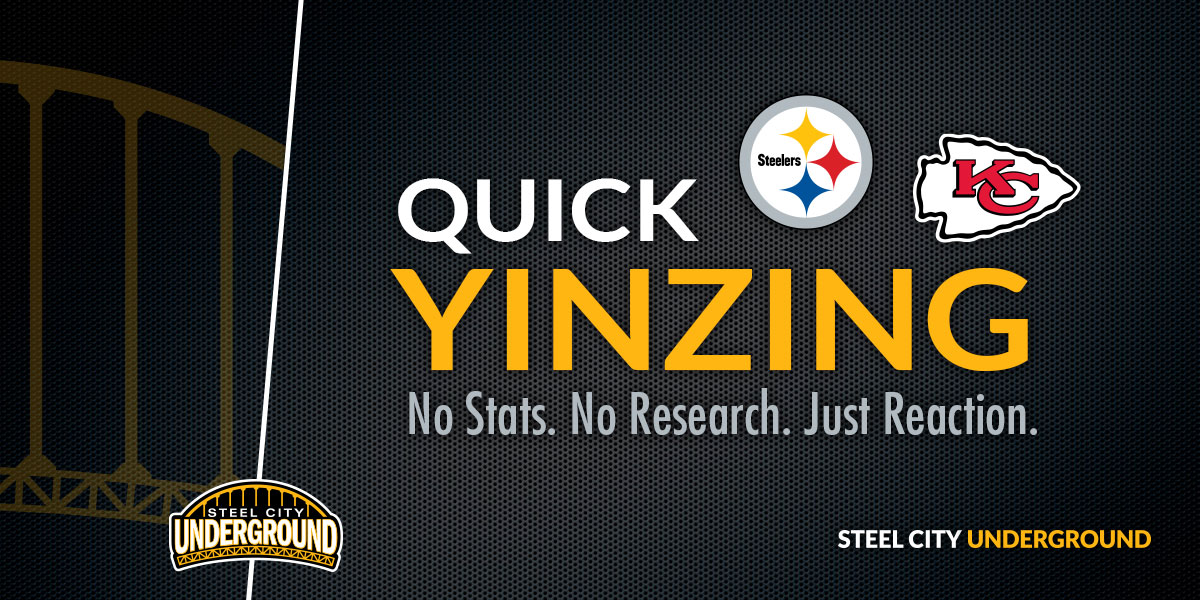 Quick Yinzing: Immediate Reaction to Steelers’ win over the Chiefs

Welcome to “Quick Yinzing”, a fast reaction article where a member of the SCU staff gives their initial post-game impressions without digging into any films, major stats, or other deep analysis. It’s as real as that car ride home or sobering down at the bar following the game!

After watching the Pittsburgh Steelers handle the Tampa Bay Buccaneers in preseason week one, fans were excited to see who separated themselves in the second exhibition game against an AFC opponent that was blazing hot in 2018, the Kansas City Chiefs. Here is the immediate reaction to what went down on Saturday night at Heinz Field.

Mason Rudolph got the start and played through most of the first half of the game. In his first series, he made a mental mistake in telegraphing a pass to JuJu Smith-Schuster that resulted in an incompletion, but as he warmed up, Rudolph settled down. Rudolph was able to feed James Conner for a few rushing plays but looked poised passing to James Washington. If he hadn’t pushed to be the #2 behind Ben Roethlisberger in the first game, he certainly looked like his campaign to do so is on track after a decent outing in his second outing.

Joshua Dobbs was sent into the game with around a minute left in the first half. Overall, Dobbs would get a thorough evaluation from the Steelers coaching staff. He, too, had a great pass to Washington, but you hate to see the kid throw an ill-advised pass into coverage trying to thread the ball too tightly for a touchdown only to have it picked… and then have to run and make the tackle on the defender who took the ball away.

Devlin Hodges didn’t get into the game until the fourth quarter. He wasn’t asked to do anything too fancy, giving the ball to rushers from the shotgun and under center. “Duck” did hit Diontae Johnson for a nice touchdown throw-and-catch that, when reviewed, was confirmed as a score. Hodges plays with a sense of command and very well could be putting the screws to Dobbs in the competition for the #3 quarterback spot (assuming the Steelers keep three).

Against a strong Chiefs defensive front, the Steelers rushers didn’t gain a ton of yardage. James Conner got a few reps in before Pittsburgh called on Jaylen Samuels. Conner did make a spectacular catch that he had the handle between his legs that showed a ton of poise. Samuels looked a lot more relaxed, especially when Rudolph handed the ball to him and drew the entire Chiefs defense away with a hard arm pump, allowing the young running back to virtually walk into the end zone for the Steelers’ first points on the scoreboard.

The Steelers put Benny Snell, Trey Edmunds and Malik Williams in to get some real-time repetitions, but the best rushing play beyond the one from Samuels was a reverse by Diontae Spencer that went for a nice 19-yard gain.

Early Diontae Spencer and Diontae Johnson had some issues, but not quite as costly as a catch and subsequent fumble by Donte Moncrief. Moncrief had the ball, but in a spin move with the defender on him, the defender was able to strip the ball away and Kansas City recovered it as a fumble. Spencer got redemption with the touchdown grab and a fantastic punt return.

Smith-Schuster didn’t play many downs and no targets fell into his hands, which meant that Saturday night was once again a James Washington night as far as receiving went. Washington made on high-point pass along the sideline, avoided an oncoming hit when he caught a ball over the middle, and really stood out as the guy that should be moved to #2 on the depth chart – not Moncrief.

There was nothing special about the tight end play. In fact, Xavier Grimble looked horrible.

During the off-season, Bud Dupree worked out with a special coach to improve his quickness, burst and ability to move his hands properly to get around offensive linemen. Against the Chiefs, Dupree looked great. Ok, don’t send us hate mail or rude comments. Dupree had two sacks on the night and was able to get into the Chiefs’ offensive backfield and make plays on rushers, too.

Another guy that stepped up his play was Artie Burns. He had a bit tackle against Tyreek Hill, forced a fumble that was recovered by the Steelers, had improved man coverage and locked on to his receiver, defended a pass, and looked like he wants to make this squad.

The Steelers defense looked quick and efficient, opening the game in man coverage. They got some stand-out performances from a few players. Tuzar Skipper also earned a sack on the night. Terrell Edmunds also forced a fumble. As a whole, this squad looks deep and if it weren’t for Mike Hilton being inconsistent and then suddenly making a back-breaking hit that woke everyone up, there would be very little to complain about on that side of the ball.

2 responses to “Quick Yinzing: Immediate Reaction to Steelers’ win over the Chiefs”