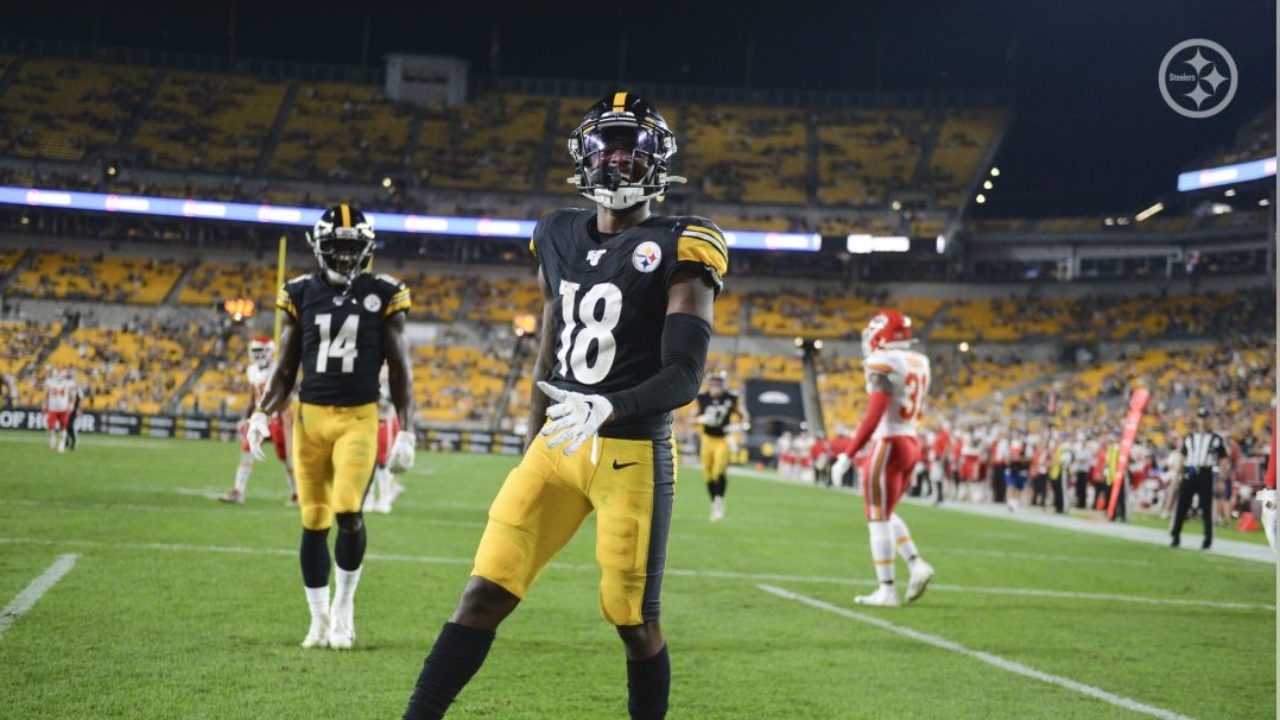 Steelers “Studs and Duds” from Week 2 of the preseason

With a second week of preseason football now under their belts, the Steelers are closer than ever to molding their final 53-man roster for the 2019 regular season.

There were ups and downs for a lot of players last Saturday evening when the team faced the Kansas City Chiefs. Here’s the players who had their stock rise, and fall, in our latest version of “studs and duds” (formerly known as “Winners and Losers” because, well, people can’t stop stealing our stuff!)

I honestly could’ve put the entire Steelers defense here, as they popped off of the page even with several other starters sitting out against most of the Chiefs starters. (Yes, the hype is real!)

Here are some players on the rise heading into Week 3 of the preseason.

It’s year two for the 2018 first round pick and he continues to flash big play ability.

Saturday was no different, as Edmunds punched a ball out of Chiefs RB Carlos Hyde’s hands while he was being stuffed by Artie Burns.

Make no mistake about it, the 2019 Steelers are all-in on getting turnovers, something they’ve failed to do frequently over the last few seasons. The entire defense could’ve made this “studs” list for how they played, even with three starters sitting out!

Yet, Edmunds is my top guy here because he’s looked simply outstanding this offseason and appears ready to make the leap in 2019.

With Joe Haden out, we saw Artie Burns all over the field making plays.

With a renewed vigor, perhaps this is just the break Burns needed: less pressure from being a full-time starter as well as a hotseat contract year where the team replaced him via free agency.

He’s looked fast, has hit hard, and even appears to be a speed demon on special teams.

Here’s to hoping this translates to a great 2019 regular season for Burns.

Fans also got their first glimpse of Steven Nelson, whose name wasn’t called hardly at all during his 16 snaps Saturday: that’s because the free agent corner shutdown his side of the field.

Two huge pass deflections (including a jarring hit to knock one would-be catch loose) plus a forced fumble off of a blitz.

Hilton is picking up where he initially left off as the team’s top slot corner.

Jumping up the depth chart is Gilbert who is another fast, hard-hitting inside linebacker.

With both Devin Bush and Vince Williams sitting out Saturday, Gilbert saw over half of the team’s defensive snaps – a signal that the staff wanted to see more from him as well as seeing the rookie linebacker seize the opportunity.

He appears to be in a position to not only make the 53, but maybe bump one of the other incumbents off of it.

Conner looked sharp as ever. Any doubts as to whether the team should’ve re-signed Le’Veon Bell should’ve been put to rest, but his 4.7 average in this game should silence any doubters who think he can’t pull off another season like his 2018 campaign.

Fans also got to see Johnson for the first time.

The rookie receiver was robbed of one touchdown and oddly the referees stood by and upheld another.

His three receptions for 46 were all dynamic plays, though his special teams efforts lacked the pop of Diontae Spencer that evening.

Washington, like Edmunds, looked every bit of what reports coming out of training camp have said about the young players.

The second-year wide receiver got to showcase his skills, including a 40-yard haul: expect more of this when the regular season begins.

Some players had their stock fall on Saturday. A few of these players are betting on themselves to move up the depth chart or make the team entirely (with the exception of the last one of course).

Here are those I felt didn’t have the best game last Saturday.

It has been two rough outings now for Okorafor, who got smoked on the right side while starting at right tackle.

There’s still a lot of upside for this young lineman, but unlike Edmunds and Washington his training camp progress hasn’t shown up in preseason action just yet.

A 54.5% completion rate isn’t going to cut it in the NFL: and this was against second and third team opponents as well.

Dobbs entered with a minute remaining in the second quarter and didn’t generate much buzz. His first drive ended with an overthrown pass intended to Diontae Johnson on 4th-and-5… then the Steelers got the ball right back.

Dobbs completed a 25-yard pass to Eli Rogers and appeared to be marching for points, but threw an untimely pick, once again looking for Johnson (this time in the endzone).

Dobbs would play four series, with only a 12-play, 32-yard drive ending in points off of a Matt Wright field goal.

Side note: was it as equally terrifying to watch Dobbs tackle the defender who made the interception near the end of the half? A great hustle play, but I’m almost in the same camp of don’t do that as I am with kickers/punters (following Shaun Suisham‘s career-ending injury on a tackle made in a preseason game years ago).

Rudolph received the start over Dobbs and had the benefit of playing with a mix of starters in the early going, but couldn’t generate any points.

The Steelers first four drives ended as follows: punt, punt, fumble, punt… with only one of those drives gaining more than ten total yards.

However, Rudolph’s incompletions and inability to get drives going wasn’t exactly any fault of his own, as several players dropped and/or fumbled the ball, killing any momentum he could get going. Rudolph would lead a 14-play, 89-yard drive for a touchdown before yielding playing time to Dobbs. Mason’s 66.7% completion rate was far superior.

So why the “dud” rating?

Mike Tomlin was non-committal in saying if Rudolph had closed the gap in the backup quarterback competition and stated there was “no separation” with two games played. That deflates the hype around Rudolph and could mean his stock isn’t, in fact, rising.

With the Steelers sorely needing tight ends, the “X-Man” has to make the easy plays.

Grimble caught only one of his three targets Saturday night, going largely unnoticed after playing almost half of the game.

I had mentioned on the SCU Podcast that Moncrief still appeared to be nursing an injured finger during training camp and that was likely the reason he sat out Week 1’s game against the Bucs.

Making his own Steelers debut Saturday, Moncrief didn’t shine like we had been talking him up as: coughing up a costly fumble on his only reception of the game which went for a single yard.

Has there been anyone NOT praising JuJu this offseason?

JuJu had a incredible season last year and fans can’t seem to get enough of him. His predicted total receiving yards this season is under 1,375 but the Steelers are one of the most prolific passing teams in the NFL so don’t be surprised if he ends up beating his own record.

We wouldn’t have known it Saturday, as Smith-Schuster failed to haul in any of the three passes thrown his direction, including a really bad drop.