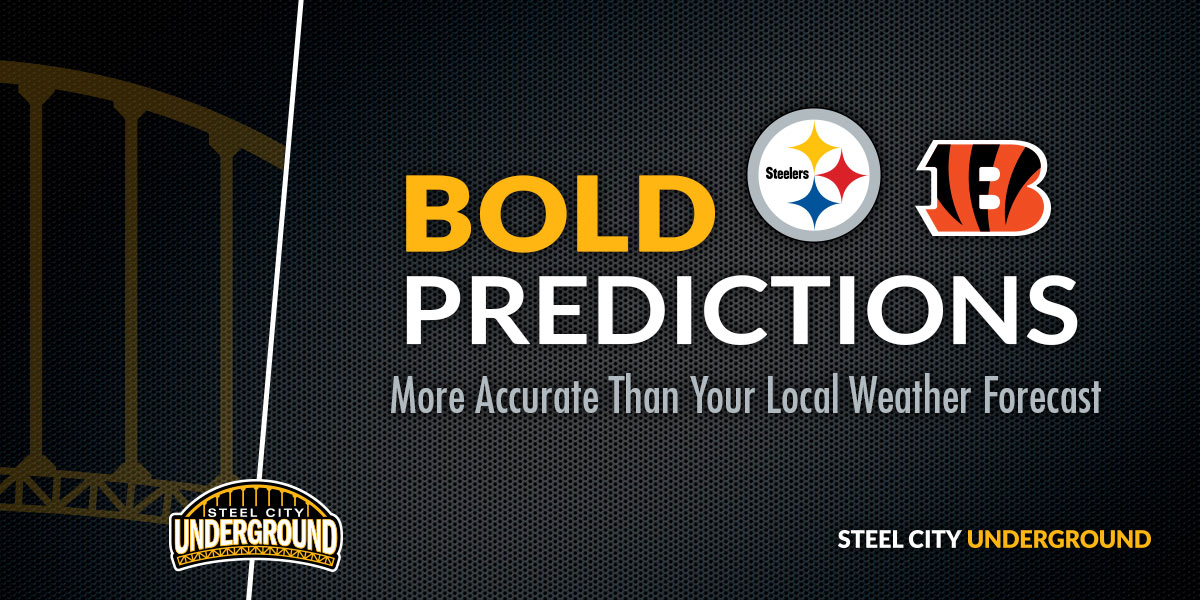 It’s Week 4 of the 2019-20 NFL regular season and Pittsburgh Steelers fans are going wild over the fact that their team hosts the 0-3 Cincinnati Bengals at Heinz Field without a win under their belt. ‘Bold Predictions’ is Steel City Underground’s feature where our SCU team members have thrown caution to the wind in the past, but are starting to get a little more serious because… well, everyone has been more serious about this year’s Steelers team. After discussions in our backchannels all week, here are the predictions for how Pittsburgh will handle their business against Cincinnati (and a bit more).

A look back at last week

Like most Steelers fans, Team SCU was excited to see the Pittsburgh defense come out against the San Francisco 49ers and ramp things up. They did. The addition of Minkah Fitzpatrick (a guy that was brought up a lot in the ‘Bold Predictions’) made an almost immediate impact and T.J. Watt was back to being disruptive.

This is as good a place as any to remind readers that our predictions are typically not grounded in what we think will necessarily happen as much as what we hope will happen. After three weeks of near-misses and complete whiffs in this weekly feature, there were fewer participants (members of the team who submitted predictions) and we lost a little bit of the fun due to trying to be more objective.

So, let’s move on to what was said about Week 4.

Ryan Lippert: Although both teams are winless and have had their own struggles, the talent difference hasn’t changed. Pittsburgh has the clearly better team and I believe that will show Monday. Also, I don’t see any way that Andy Dalton comes in and beats this team at Heinz Field with a crowd hungry for their first win. This will be a breakout game for James Conner as the Bengals rank 31st against the run. I see Conner going for over 100 with a pair of touchdowns and Pittsburgh wins this one 28-17.

Joe Kuzma: The Steelers won’t just get back in the win column, but I think we’ll see a drastically different team on Monday Night, one which has flashed its potential in the previous two games against better opponents.

While a lot of people are banking on the offense, and I want to see them sustain some better drives, it’s going to be the defense that rides the back to victory. Look for the Steelers to be a plus-three in the turnover column with a myriad of hits on Andy Dalton (four sacks is my floor for this game).

On the flip side, the Steelers offense won’t cough up the ball whatsoever and will actually have at least a pair of 10-play drives that eat up a significant portion of game clock (I’m thinking 4.5-5 minutes each) with both ending in scores.

Mike Sofis: The Steelers will be a little bit more aggressive on offense this week. The offensive line will bounce back and give Mason Rudolph more time to throw. Rudolph will have a breakout game with three touchdowns and over 250 yards passing.

On the defensive side of the ball, I’ve been burned too many times by Keith Butler‘s suspect playcalling and strategy to expect a lot of improvement on defense. Steelers win in a semi-shootout 28-24.

Terry Fletcher: Now coming into Monday Night Football, at home, against a division rival who is also 0-3 and without their star receiver A.J. Green, with our fans, we have a good shot at our first win of the season. The Bengals will be keying in on the running game since based on the tape they have to be unconvinced Rudolph can beat them through the air, with the Steelers averaging 64 yards and 3.76 per carry, according to PFF. The offensive plan has to include letting Rudolph loose and not be so conservative in their play-calling in the passing game. Mason has had only 2 attempts in 46 of a pass more than 30 yards. If Coach Tomlin can get is offensive play-caller to allow our young QB to play to win and not play to not lose and just let the ball fly we should find a major butt-kicking here. Prediction: 35-9 Steelers.

Zac Celedonia: Double dip, Steelers get 4+ turnovers again. Minkah (Fitzpatrick) will be responsible for at least one of those. JuJu Smith-Schuster scores twice. Nick Vannett hauls in 7 catches. Rudolph throws 4 TDs. Steelers win 38-13. Also, James Washington finally makes an impact. He and Mason connect on one of their signature long balls.

Christina Rivers: Without going too crazy, there is one thing that I anticipate above all predictions this week and it is that the veterans on the offensive and defensive lines step up to offer more support to their younger counterparts. Cameron Heyward fires up his guys while Ramon Foster, Maurkice Pouncey, and David DeCastro expect more from themselves and how the line protects Rudolph and sets up the run game. The veteran players know what to expect from the Cincinnati Bengals and this is going to be the game that they say, “Enough. Grab this win!”

Mike lives in Hanover, New Hampshire but is a home-grown Yinzer from the 412. A Steelers fanatic who recently earned a Ph.D. in Behavioral Psychology, he likes to put Heinz ketchup on steak and back up his opinions with data.