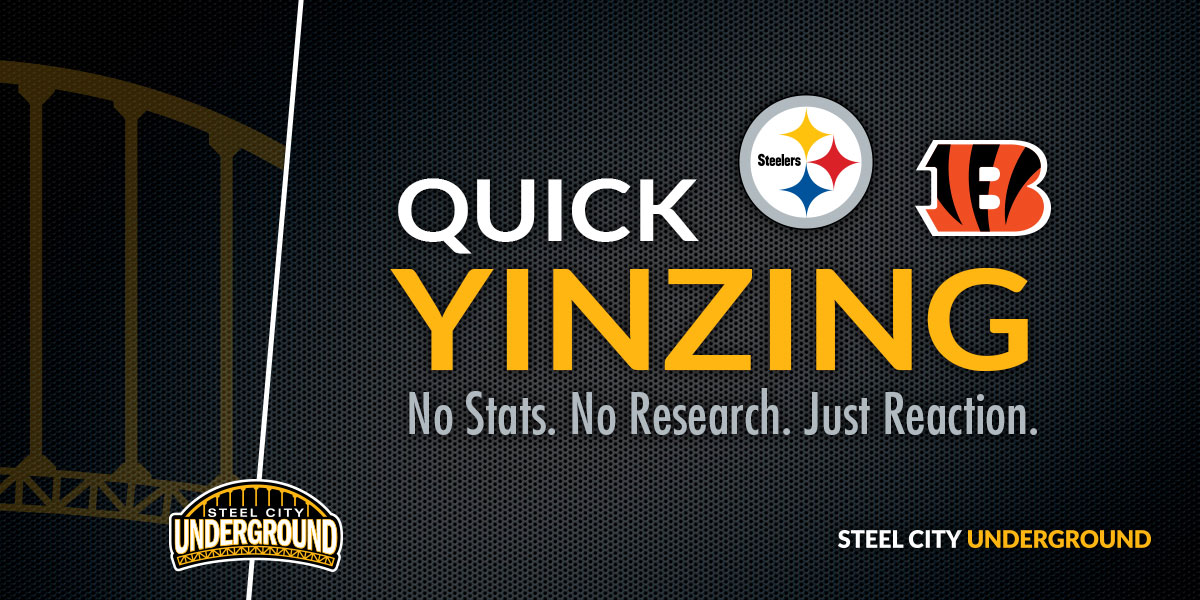 It has been clear that the Pittsburgh Steelers have injected a ton of youth into their roster. Through three weeks of play in the 2019-20 NFL regular season, it appeared as if the growing pains were too great for the Steelers to overcome. In primetime, on Monday Night Football, the Steelers hosted a Cincinnati Bengals team that was just experiencing pain. There was no relief, either, as Pittsburgh sent their AFC North foes to the southwest packing with a 27-3 final score and a black and gold win.

Entering the game, Steelers fans had witnessed a bland offensive playbook offered to young quarterback Mason Rudolph. Jokingly, I suggested that perhaps offensive coordinator Randy Fichtner had been kidnapped by aliens because he finally seemed to have found pages of plays that played to Rudolph’s strengths.

Samuels, who has always been considered an all-purpose player – at tailback, halfback, tight end – was able to get free with some wildcat action and jet sweeps. Samuels and Conner both punched rushing touchdowns into the end zone, with Samuels doing so off of a direct snap. Fired up, the duo helped set a tone in keeping the Bengals defense from being able to make the Steelers offense one-dimensional.

After suffering an early mishap by not maintaining control of the football, Johnson got some love and encouragement from Smith-Schuster. The result? Johnson grabbed a nice pass from Rudolph for an easy walk-in touchdown.

The offensive line, who has been a focal point for questions regarding the past three games and what has gone wrong with such a talented group, stepped up and got feisty. It wasn’t a surprise to see Maurkice Pouncey get a little heated as he and David DeCastro rallied the offensive front to spring several plays free.

Eight sacks tell the tale of the Steelers D

It was apparent that the Steelers defense was prepared to get themselves off of the field and keep their tempo high when they were on it all night. Dialing up a mix of pressure and coverage, Pittsburgh was able to dump Andy Dalton in the turf a season-high eight times, including a strip-sack and fumble recovery.

Although Bud Dupree and Mark Barron have been dogged at times for what looked like a lack of overall effort, Barron broke up an early pass meant for tight end Tyler Eifert and grabbed an interception later in the game while in the end zone for a touchback. Dupree applied healthy outside pressure and was able to get into the Bengals’ offensive backfield to make plays of his own (including the strip-sack). Scratch your heads all you want; it was what it was.

Cam Heyward, Javon Hargrave, Tyson Alualu and T.J. Watt all logged sacks as well as pressures and tackles on the night to give the defensive backfield opportunities to make plays on the ball. Joe Haden wasn’t the only defensive back to get his fingers on a near interception.

It’s too early to pop the cork on the wine bottle and say that everything that was wrong in the first three weeks of the season was remedied in Week 4. Getting their first win, at home, does give the Steelers some momentum – even if it is just emotionally. Pittsburgh needed this win for morale as much as they needed it to find a way to have success this season. And as they walked off the field on Monday night, it certainly felt a lot less like “oh no” than “Here We Go!”