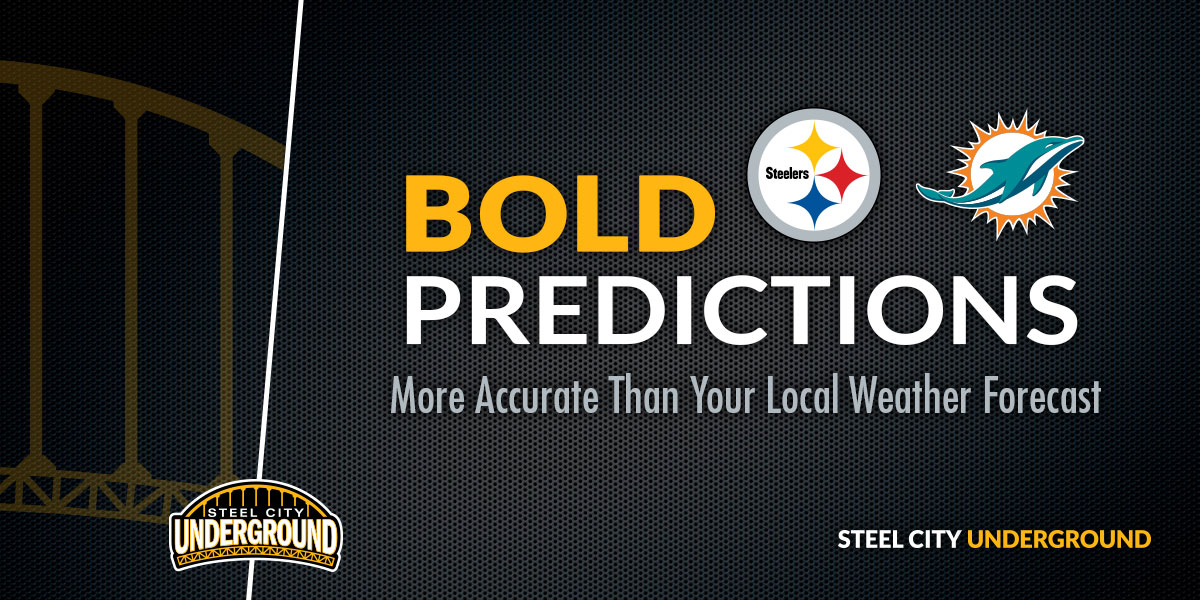 Welcome to Week 8 of the 2019-20 NFL regular season Pittsburgh Steelers fans. After a bye in Week 7, the Steelers play host to the winless Miami Dolphins at Heinz Field. ‘Bold Predictions’ is Steel City Underground’s feature where our SCU team members have shifted from throwing caution to the wind in how crazy they’ll go in their prognostications to a more objective, yet still bold, set of predictions on how Pittsburgh will, or will not, handle business this week.

(Note: Congratulations to the Overly family on the birth of their daughter!)

Things have been hectic for me lately with the baby but that doesn’t mean I haven’t been paying attention. I’m back, and I got some things to say:

The defense will continue to absolutely dominate, especially on Monday at home. Minkah Fitzpatrick will take center stage and force two turnovers, and Ola Adeniyi will get his first career sack in the game.
On offense, in Mason Rudolph’s return, he takes advantage of a depleted Miami defense and throws for 250 yards and 2 touchdowns. Overall it’ll be a complete performance from top to bottom, and the Steelers will come away with a 28-10 victory.

You want bold predictions? You want something so outlandish that it could never occur? Happy to oblige – 8 sacks. Steelers tally eight sacks in this game. Why? Because I deem it to be so. That is all.

Steelers running backs combine for over 200 scrimmage yards on Monday night as we see a combination of runners behind the returning Roosevelt Nix plow through the porous Dolphins defense. Look for James Conner to exceed 100 yards with some spot duty from both (and also returning) Jaylen Samuels and some Benny. Snell. Football.

Coming back to MNF for the second time this season I believe we will see JuJu Smith-Schuster get targeted to the point of two touchdowns and 100 yards in the air. Our returning QB, Mason Rudolph, after his brutal hit – now cleared from concussion protocol – will use every receiver he has and have a four-TD night. He’ll also take one in himself to prove he’s back and no one is taking this job from him, well until Ben is back. Steelers will win again 42-10.