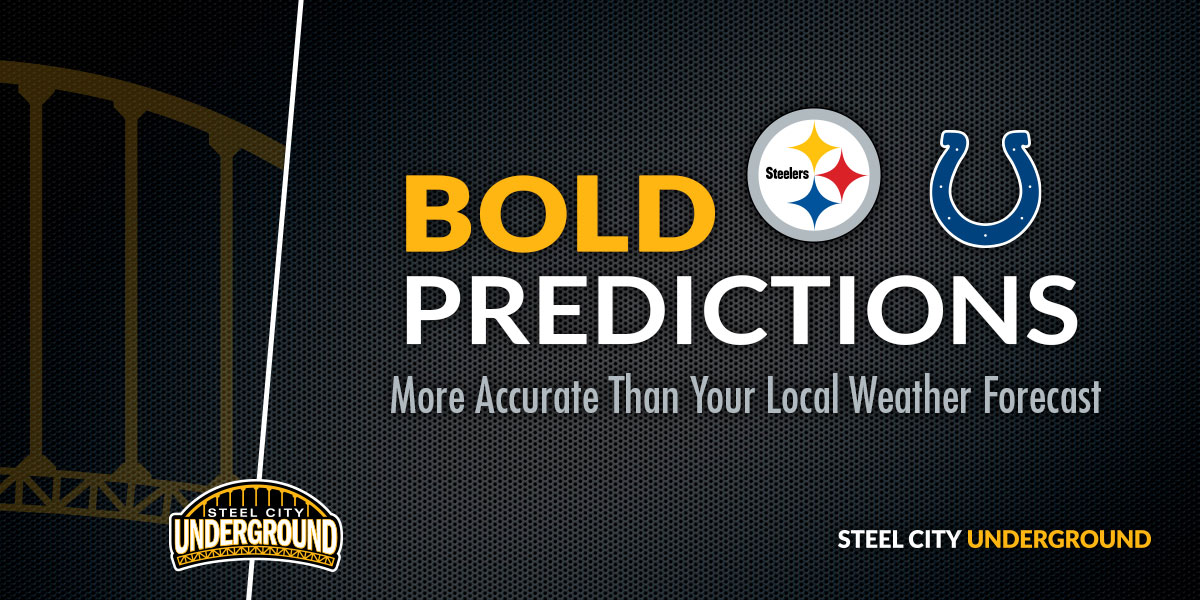 Bold Predictions: The Steelers will continue to dominate the Colts

Welcome to Week 9 of the 2019-20 NFL regular season Pittsburgh Steelers fans. After a win over the Miami Dolphins in Week 8, the Steelers will host the Indianapolis Colts (5-2) at Heinz Field. The Steelers have been able to hand the Colts losses in their past two matchups and look to continue to dominate Indianapolis in front of the home crowd. ‘Bold Predictions’ is Steel City Underground’s feature where our SCU team members have shifted from throwing caution to the wind in how crazy they’ll go in their prognostications to a more objective, yet still bold, set of predictions on how Pittsburgh will, or will not, handle business this week.

If you looked at Team SCU’s predictions last week only after the Dolphins put up 14 points early on the Steelers, you likely thought everyone had lost their minds. Thankfully, Pittsburgh woke up and gave fans in the stands and across Steelers Nation a win in the end.

Derek Overly predicted, “Minkah Fitzpatrick will take center stage and force two turnovers.” Well, the ‘Fitzmagic’ did seem to be in black and gold as the Steelers’ safety, acquired from Miami, grabbed two interceptions off of Ryan Fitzpatrick.

Brian Roach predicted that the Steelers defense would get eight sacks. Pittsburgh was busy on defense, applying pressure, but they only tallied four sacks for a total loss of 20 yards. That pressure, however, helped set up the interceptions and three forced fumbles (two recoveries) the Steelers ‘D’ logged.

Joe Kuzma was all-in on the run game and felt that behind Roosevelt Nix running backs James Conner and Benny Snell would combine for 200 scrimmage yards on the ground. He correctly predicted that Conner would exceed 100 yards on the night (he gained 145 yards on 23 carries). Snell carried the ball five times for 13 yards. Both rushers were injured during the game, which meant that Trey Edmunds entered the offensive backfield late in the game. The Steelers recorded 158 net yards rushing (5.4 yards per rush average).

Terry Fletcher predicted that JuJu Smith-Schuster would grab two touchdown receptions and gain at least 100 yards via the passing game. Smith-Schuster grabbed five catches for 103 yards (20.6 yards per reception average) for one touchdown.

And while there was a sense that Mason Rudolph would prove he was back after the big hit he took against the Ravens, Derek correctly predicted Rudolph would throw for 250 yards (he threw for 251) and two touchdowns. Terry predicted that he’d use “every receiver” at his disposal, and Rudolph targeted eight different teammates on offense including Diontae Johnson, Donte Moncrief, Vance McDonald, James Washington, Nick Vannett, Smith-Schuster, and both Conner and Nix.

This week’s predictions from the SCU team

The vast majority of our Steel City Underground team that offered predictions for Week 9 focused on the Defense. No surprise since Pittsburgh has become a turnover machine this season, doing their part to get the offense – even with struggles in consistency on that side of the ball – back on the field. Not everyone focused solely on the defense, however. Here are the individual predictions:

Joe’s Predictions: The Steelers sack and turnover party continues with a set of sacks (3) and a pair of picks (2) on Jacoby Brissett. Doesn’t seem too bold but he hasn’t thrown more than one pick in any of his 7 starts this season and has only been dropped 3 or more times by two defenses in 2019. (Titans, Broncos.) Then again, the Colts haven’t faced a defense such as the Steelers this season either!

Derek’s Predictions: The defense has found its traction, and it now leads this team into the future. And it will continue the pattern again this week against the Colts. Forcing 3+ turnovers again this week, the defense will set up Mason Rudolph and the offense with great field position and without the bye week lull, the offense won’t come out flat. All in all, this game will look closer than it was in the end, with the Steelers winning 30-27.

Christina’s Predictions: If you haven’t jumped on the “DJ” (Diontae Johnson) train, it’s time you used that ticket. Rudolph has continued to try to build that college rapport he had with Washington but it has been Johnson who has emerged as the young quarterback’s security blanket. Between Johnson and “JuJu”, I think the magic comes to life against a less-than-frightening Colts defensive secondary to the tune of 125 yards in the toss-and-catch area of the Steelers offense on Sunday. Johnson will log at least one touchdown again this week. On the defensive side of the ball, there’s little to complain about as they’ve been a true force to be reckoned with. Steven Nelson has been having a sneaky great season in black and gold and I expect he will combine with at least one other defensive back to take a pass away from an Indianapolis receiver in Week 9. My boldest prediction? Even if the cheers for Zach Banner were misunderstood last week (as some pointed out that Heinz Field fans were not celebrating just because he was announced as eligible as a receiver but for other on-field reasons), I can see the Steelers putting in a play that gives Rudolph a chance to hit Banner as a target for morale’s sake.

Noah’s Predictions: As the defense has consistently started to find its stride, this time, it’s the offense’s turn to shine. They find their stride enough to score 30+ points as Mason Rudolph continues to get the rust off. It will be a cold game, and the Steelers will have a balanced offensive attack to take apart the Colts defense. On the other side, the defensive line will continue to wreak havoc, then again, that’s not much of a Bold Prediction!

Terry’s Predictions: They say “Defense wins Championships”, I’m beginning to believe it definitely wins games. The Steelers defense not only shows up every week but is finally stringing wins together. After a rough start, down 0-14, allowing Rudolph to find his footing to come back and win that game 27-14 was a Monday Night Football miracle. With the Colts coming to town with their own backup in Jacoby Brissett and atop the AFC South at 5-2 this will not be an easy win for the Steelers. They will need to rely heavily on the passing game as the Colts secondary is weak, so look for Mason to be slinging it to all receivers on Sunday. I believe his chemistry with JuJu Smith-Schuster is coming to fruition and Juju will have a hat trick at 3 TDs. Connor and Samuels will spilt the carries with Samuels having a TD. This will be a cool 45-degree day so Boswell will be a key factor in the win. I see a lopsided game with the Steelers winning 28-3.