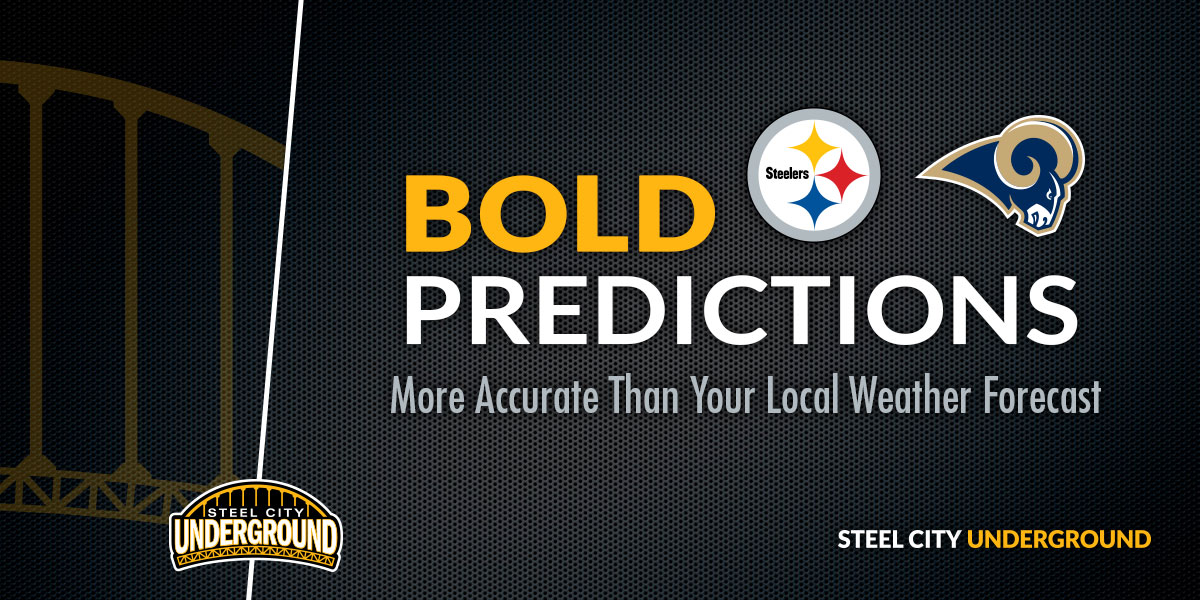 Bold Predictions: Might the Steelers have the Rams’ number in Week 10?

Welcome to Week 10 of the 2019-20 NFL regular season Pittsburgh Steelers fans. After a win over the Indianapolis Colts in Week 9, the Steelers will host the Los Angeles Rams (5-3) at Heinz Field on Sunday. With a 4-4 record, the Steelers have aspirations to get themselves into the playoff picture and the Rams are in a similar position as they seek out a third consecutive win. ‘Bold Predictions’ is Steel City Underground’s feature where our SCU team members have shifted from throwing caution to the wind in how crazy they’ll go in their prognostications to a more objective, yet still bold, set of predictions on how Pittsburgh will, or will not, handle business this week.

Terry Fletcher felt that the chemistry between Mason Rudolph and JuJu Smith-Schuster was “coming to fruition” and the result would be three touchdowns between the duo. While Smith-Schuster did factor it, it was running back Jaylen Samuels who not only helped lead the way in the ground game Trey Edmunds (James Conner out due to injury) but also in the receiving game. She correctly predicted that placekicker Chris Boswell would play a big factor in the win. Boswell successfully kicked four-of-four field goals for 14 points.

Noah Freeman predicted the defensive line would continue wreaking havoc. They did their part in helping free-up Bud Dupree (the reigning AFC Defensive Player of the Week) for three tackles, two sacks, a forced fumble and recovery against the Colts.

Joe Kuzma expected the Steelers’ “sack and turnover party” on defense would continue, with three sacks and a pair of interceptions. Minkah Fitzpatrick grabbed the lone pick for Pittsburgh but was able to take it 96 yards on the return for a touchdown. The Steelers logged five sacks (even better than predicted!) with T.J. Watt grabbing 1.5 (splitting one with Mark Barron) and Mike Hilton earning another.

Derek Overly felt it would be a three-plus turnover (earned) game for the defense and has continued to be nearly spot-on with his predictions lately.

This week’s predictions from the SCU team

The composition of the team members who offered predictions for Week 10 changed a little but there is still a consensus that defense is where the Steelers seem to be having the most success. Here is how each team member, who participated, predicted things will go down.

Derek’s predictions: I’m kind of on a surge of late with my predictions, so let’s look into the crystal ball I have:

“JaySam” will have another record night attacking the Rams linebackers over the middle and James Washington will have his coming out party (Jalen Ramsey will shadow JuJu, leaving Diontae Johnson/Washington to eat). The two receivers will lead the offense on a bit of a scoring streak. And the defense will continue its turnover streak, notching two more this week. All in a tight contest, all the way to the finish.

Christina’s predictions: (Mason) Rudolph gets into a rhythm with an offensive line that looks to include Matt Feiler at left guard next to Alejandro Villanueva and Chukwuma “Chuks” Okorafor at right tackle, finding a way to get the ball to a minimum of seven different targets in the passing game for two touchdowns and 200-plus air yards. Despite the Rams sporting a good defense with Aaron Donald as their main pass-rusher, Pittsburgh will find a way to spread the offense and still grab 80-plus yards and a touchdown in the ground game as well with Samuels paired with Trey Edmunds (both will factor into the pass-catch game as well).

Brian’s predictions: The turnover train keeps running! The Steelers defense has been creating turnovers at a historic rate, and that will continue against the Rams.  I predict three turnovers, two picks, and a (forced) fumble.  The fumble will come as the result of a strip-sack by either Bud Dupree or T.J. Watt, and Minkah (Fitzpatrick) joins in with one of the two interceptions.  Steelers win a game that is closer than it should be.

Terry’s predictions: With a three-game win streak, the LA Rams are coming to town with their young coach, the No. 1 player in the league in Aaron Donald and a quarterback (Jared Goff) that has been to the Super Bowl. Randy Fichtner is going to have to get our second-year QB, Rudolph, to throw it downfield. Without that long ball, it will be a long day. Now that JuJu is back in the mix and Dionte Johnson has shown WR2 flashes, I predict both will score touchdowns with our defense adding a third. But, it will be Chris Boswell to the rescue in a close game. Steelers win 27-24.

Joe’s predictions: Want a truly bold prediction? The Steelers win a narrow game when the referees finally do not call a pass interference call against them. In fact, we’ll see one call late in the game that goes in the Steelers’ favor. My favorite candidate here is Diontae Johnson, who has had two horrible calls go against him in previous weeks. The referees are prepped on game film just like players and there’s no way they’re reviewing those calls made against Johnson and believing they are “by the book”. This may even give him an advantage, perhaps some leeway to actually do something and get away with it – if he does, it won’t matter because coaches challenges being successful on OPI/DPI have gone the way of the Dodo!