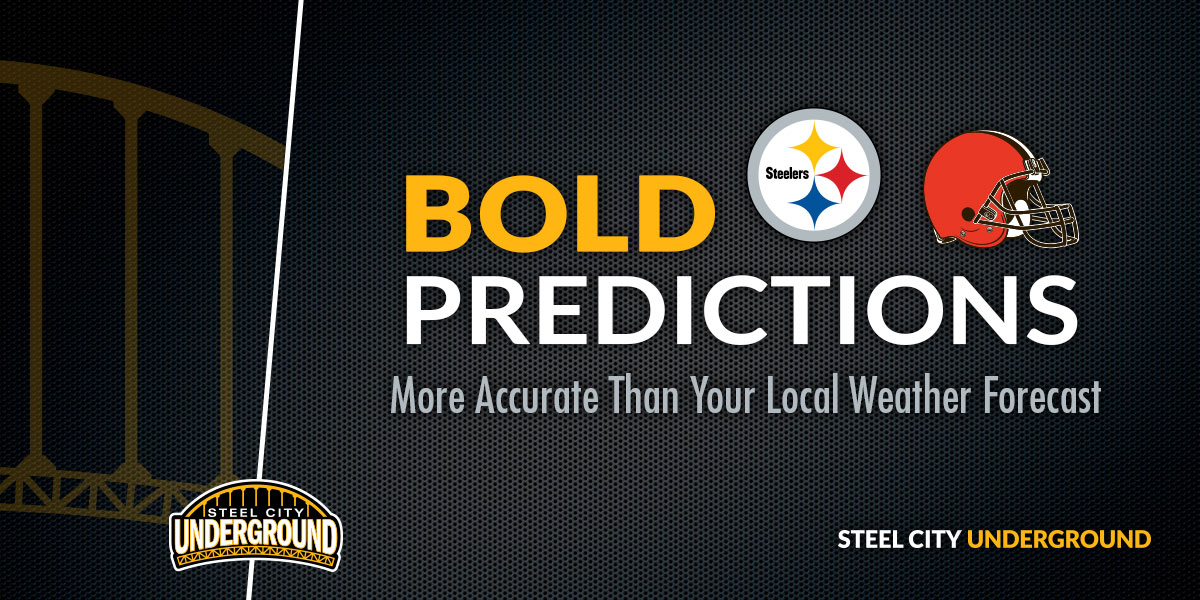 Bold Predictions: Steelers will put to bed the hype over the Browns

When the Pittsburgh Steelers and Cleveland Browns go head to head on Thursday Night Football, it will officially kick off Week 11 of the 2019-20 NFL regular season (can you believe it?). Both teams won close games on Sunday; the Steelers beating the Los Angeles Rams by five points and the Browns beating the Buffalo Bills by three points. With placement in the AFC North on the line, we jump right into our prognostications.

While Jaylen Samuels didn’t do as well as some of Team SCU thought he would, Diontae Johnson and James Washington did “lead the offense on a bit of a scoring streak” as Derek Overly predicted. Johnson caught four passes for 64 yards (16 yards per reception average) while Washington hauled in six-of-seven targets for 90 yards (15 yards per reception average) and a touchdown.

Derek also predicted two takeaways (as did Brian Roach). The Steelers grabbed three interceptions on the game; one from Minkah Fitzpatrick, one from Terrell Edmunds, and one from Joe Haden. Fitzpatrick also grabbed a stripped ball and returned it for a touchdown.

Christina Rivers predicted Mason Rudolph would get into a rhythm with Matt Fielder and Chukwuma Okorafor inserted into the offensive line and that he’d find seven different targets. Rudolph did indeed hit exactly seven targets in the passing game; Washington, Johnson, JuJu Smith-Schuster, Trey Edmunds, Vance McDonald, Samuels, Nick Vannett combined for 22 receptions for 242 yards and a touchdown. She also thought the offense would still be able to grab 80-plus yards in the ground game (they earned just 42) with Samuels and Edmunds factoring into the passing game.

Terry Fletcher predicted Chris Boswell would come to the rescue in a close game (27-24). Boswell scored the only points after halftime and added two PATs in what came down to a five-point game.

Joe Kuzma’s prediction about the officials not calling a pass interference call against the Steelers? After scouring through the advanced stats, Pittsburgh was penalized 13 times (loss of 107 yards). Unfortunately, they did earn at least one (that I could find): Te. Edmunds was called for DPI on a pass deep to Cooper Kupp. There was a pass interference call on Jalen Ramsey on a pass meant for Smith-Schuster and earlier in the game there was a major issue among officials when Rudolph threw a deep ball over the middle to Johnson that was intercepted but given back to Pittsburgh due to a defensive pass interference call on Ramsey and a defensive holding call against Eric Weddle at the same time. If Joe was trying to be sarcastic, or infer that the refs still stink, his prediction was sort of correct.

Derek’s Predictions: The Steelers head on the road to Cleveland, carrying their four-game win streak and elite defense into the ‘Dawg Pound’. Baker has been rattled this season is and turning the ball over at an alarming rate. The Steelers have 8 straight games with 2+ takeaways and that streak becomes 9 against the Browns. But the big story will be the offense. Mason played the best game of his young career against the Rams, even if his receivers didn’t help him; this week in practice they will work this receiving core the hardest it has ever worked and on gameday come out firing on all cylinders. Rudolph will throw for 300 yards for the first time in his career in a blowout victory, 35-10.

Terry’s Predictions: Minkah Fitzpatrick will continue to feast and have another INT and TD when the Steelers travel to Cleveland for TNF. With a short week, it will be tough for the coaches to work on some of the issues in the Rams game so the running game will need to be a major factor; with any luck, we’ll get James Conner back and he’ll rush for 100 yards and two touchdowns. I predict Mike Tomlin will have some offensive input and get Rudolph throwing the ball deep to JuJu for a TD. Steelers win 24-7 in Cleveland.

Joe’s Predictions: Mason Rudolph continues Ben Roethlisberger‘s legacy of owning the city of Cleveland, while Baker Mayfield gets sacked 7 times and turns the ball over thrice, sending Browns fans to complain about how they couldn’t possibly have been beaten by a quarterback drafted 76th overall the same year their “savior” was taken with the first pick!

Christina’s Predictions: Want a fact? Odell Beckham Jr. (the supposed answer to the Browns’ issues at the receiver position) has fewer receptions (44) that two NFL running backs (Austin Ekeler, Christian McCaffrey) and five tight ends (Travis Kelce, Austin Hooper, Darren Waller, George Kittle, Zach Ertz). He has the same number of receptions as tight ends Mark Andrews and Evan Engram. Another fact? Beckham Jr. is having his worst receiving season since he entered the league. On Thursday, the Steelers defensive backfield will hold him to less than 10 receptions. Fact: Baker Mayfield has thrown 12 interceptions so far this season, and will throw another while targeting Beckham Jr. this week. Woof!

One response to “Bold Predictions: Steelers will put to bed the hype over the Browns”