Over the last several days I’ve tried my best to bite my tongue, but just can’t take it anymore. The smattering of negative comments toward the Pittsburgh Steelers is almost in preseason mode, and that’s from their own fanbase!

On the flipside, you have Cleveland Browns fans (and a few attention-seeking members of the media) acting like fools to make it appear that Myles Garrett is the victim in what occurred during the end of the Thursday Night Football game between the Browns and Steelers.

That’s correct: in their eyes Garrett is the victim and not Mason Rudolph.

I’m here to set some things straight. Above all, Rudolph did not deserve what happened to him. Would any player deserve it? Let alone a team’s figurehead leader at the quarterback position?

Put yourself on the field if you will: who is the most important player that cannot be touched beyond a reasonable football action/play? The quarterback, right? That’s why we stand around the water cooler on Monday mornings and debate whether or not guys like Tom Brady or Aaron Rodgers wear skirts.

On the contrary, there are some passers who don’t appear to get the same protections. Take the hit Mason Rudolph took from Ravens safety Earl Thomas weeks ago, which not only knocked him out of that game, but set him back a couple of weeks, missing the next game and waiting until the bye week to resume full activities after being placed in concussion protocol.

That’s precisely what happened on Thursday night when all hell broke loose at the end of the game. Throughout the night, helmet shots took JuJu Smith-Schuster and Diontae Johnson out of the game. Rudolph also took a helmet-to-helmet shot which got downplayed since it occurred when JuJu was laying on the field during the same play.

Now let’s take this one step further: there’s less than a half minute remaining in a game where it’s obvious who is going to win. How would you feel, as a quarterback, if you got rid of the ball and were still forcibly thrown to the ground?

A lot of people are trying to excuse Garrett for the action, which occurs after the ball leaves, but fail to realize his own teammate Joe Schobert (#53 in the clip below) has a grip on Rudolph and could’ve made the same over-the-top action during this play but did not.

Isn't there some rule about driving a QB into the ground and laying your body weight on them? Following the ball being released no less? (Asking for a friend.) pic.twitter.com/2VaOUsC6a4

That should tell you everything you need to know about what happens next. Is it necessarily dirty? I can’t say, but the referee standing over top of it didn’t think so.

Was it late? It occurs while the ball has just been thrown. To be honest, if the roles were reversed and this was Bud Dupree sacking Baker Mayfield, I might make the argument that it wasn’t much of anything.

So, what the heck goes wrong here? Watch Mason’s hand, which is stuck inside of Garrett’s pads and/or facemask. As Browns fans claim Mason is trying to “rip” at Myles’ helmet, it’s more a case of Mason’s hand “stuck in the cookie jar”. 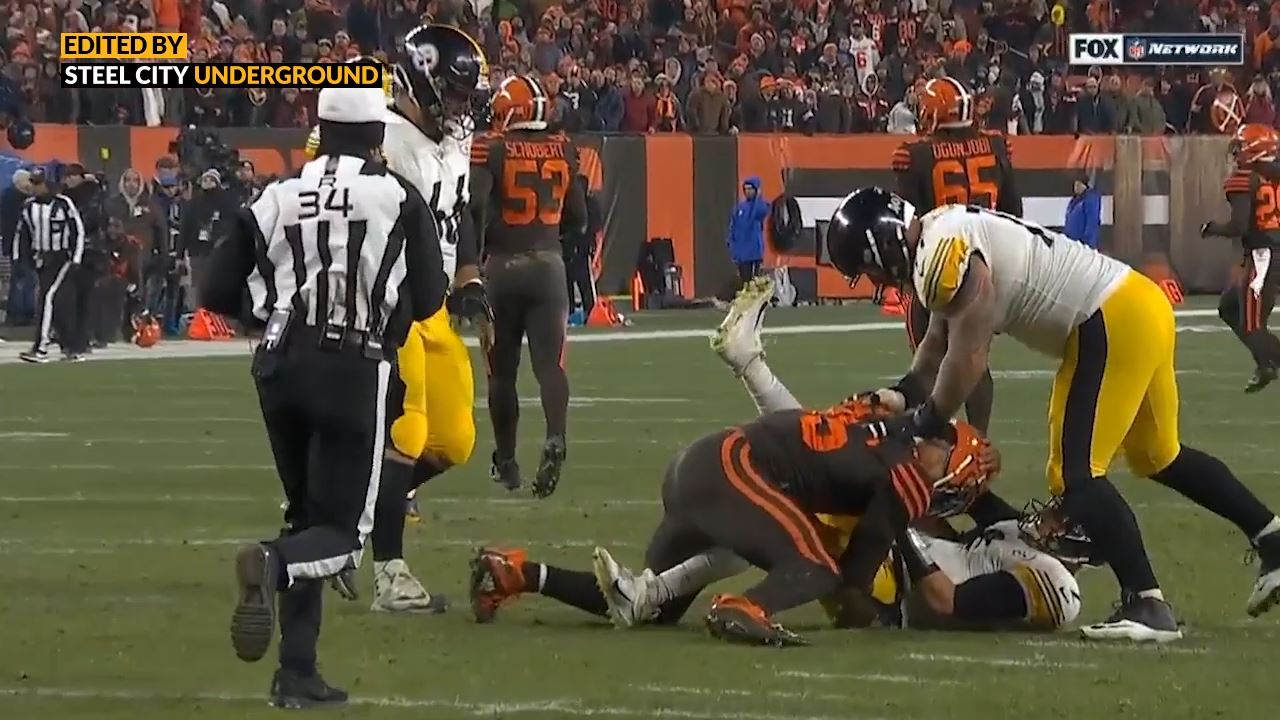 There’s also no “rip” at Garrett's helmet. Yes, his hand is on it, but have you put your hand on a helmet? Watch the clip again as it slides right off of the slick, curved surface as he’s pushing away from Garrett to free his hand: which Rudolph does, breaking his glove in the process! 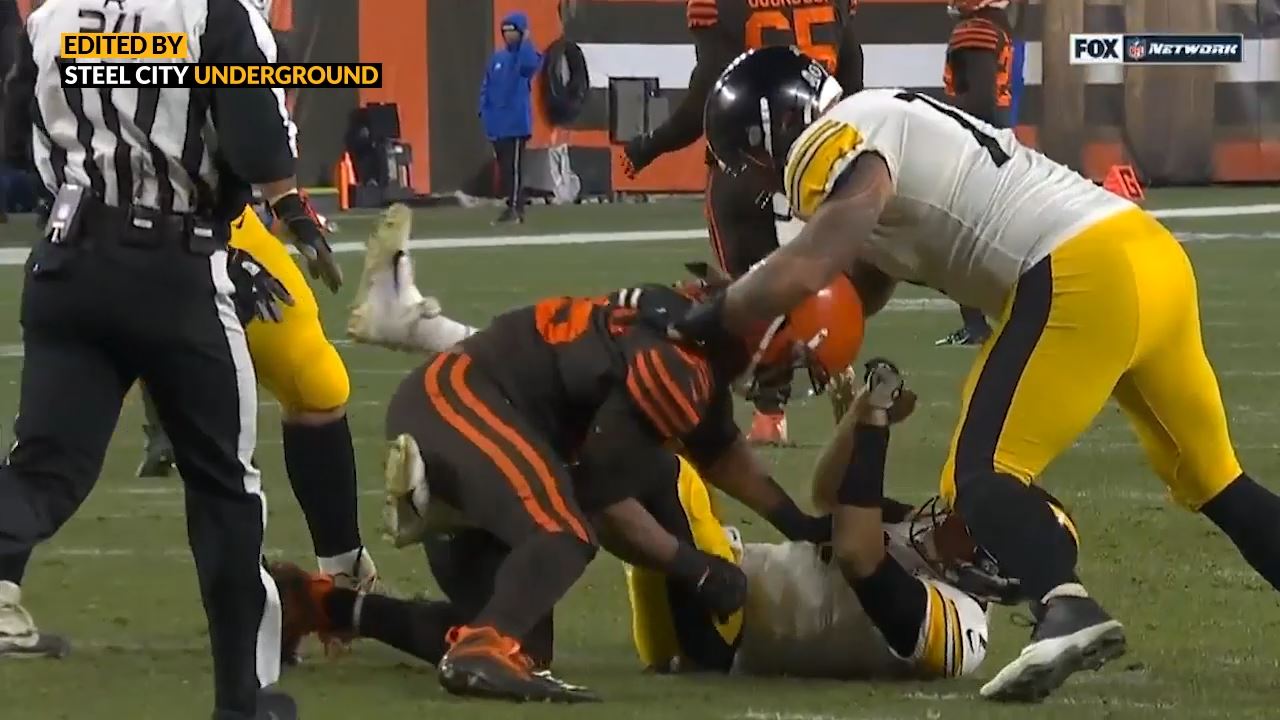 Furthermore, Garrett decides to pull at Rudolph’s facemask after the quarterback has already freed his hand.

Another I'm hearing is Mason Rudolph "kicked" Garrett in the nether-regions and that's how #Browns fans are justifying his helmet swinging attack on the #Steelers QB.

I don't see where Rudolph did anything close to that, provoking Garrett to drag him by his facemask?? pic.twitter.com/akbeHTUMYD

Of course, you probably read the accompanying texts with the tweets above, which references what Browns fans (or Steelers haters) are referring to as attempts to strike Myles Garrett below the belt.

For frame of reference this is what's being distributed as the "kick" around social media. pic.twitter.com/1eTKMogSaD

If you rewatch the video above, there's no upward movement by Rudolph which would constitute a "kick". At worst, he's trying to use the bottom of his foot to push Garrett, who is now in the process of yanking Rudolph up by his own facemask, off of him.

Heck, let's say Rudolph is deliberately trying to kick Garrett: do you think he can see what he's doing? You go as your head goes. For those of you ever involved in gymnastics, you know what I'm saying. For those of you who have not, have someone gently put the palm of their hand on the back of your head and let them move you where they want: the rest of your body will follow your head, which in this case has Mason's body being pulled upward against his own will.

That's still not enough to satisfy the "Free Garrett" crowd who are trying to justify the helmet-wielding actions of the defensive end by saying Mason Rudolph threw a punch at his "bread basket".

This is their "argument" from a different camera perspective pic.twitter.com/QDEpl5ZdAW

Well, that simply doesn’t happen… ever. The proof is in the video which shows an opposite camera angle with full context of the quarterback reaching out and up for his helmet held in Garrett's opposite hand.

Now, for everyone who has read this far and is thinking to themselves “this guy is a homer defending his player” you wouldn’t be wrong. However, I’m trying to at least be reasonable. Part of that reasoning is realizing the perception Garrett has throughout this sequence.

Does Garrett think his helmet is being toyed with? That very well could be true.

Does it justify everything else that happens next? No.

As already proven above, Rudolph had disengaged from any contact with Garrett by the time the Browns defensive end snatches the Steelers quarterback by his facemask. I’m of the belief that if he just shoves his head back or even throws a shove/punch at him, there might be a flag, but there’s definitely not a suspension.

Heck, Damarious Randall (nor Earl Thomas weeks earlier) were suspended for the helmet-to-helmet hits. Why would Garrett get suspended for a short, heated exchange?

Yet, Garrett took it to several other levels. The first level is pulling Rudolph to his feet by his facemask, which as seen as the video is paused above, was unprovoked by any kick/punch or other perceived action other than what happened with Rudolph attempting to free his hand.

The third is the added action of attacking the defenseless player with an object that could’ve inflicted serious injury, including death.

That is why Myles Garrett received a fine and a suspension.

No matter what side of the fence you’re viewing this from, those additional actions go above and beyond any “disagreement” between players regardless of the situation.

That’s why Mason Rudolph is the victim in this scenario and his good name should be cleared of the rest of the nonsense floating around the Internet.

Which Steelers need a big season if they want to contend for a Super Bowl?

The Steelers are set to play only five teams that advanced to the playoffs last season, and their crossover opponents ...

Examining, and explaining, why the Steelers have a weak strength of schedule

There are a lot of fans who initially saw the Baltimore Ravens as having the easiest schedule, on paper, for ...

Addressing awful Steelers takes from around the Internet

Brian and Zach team up to sort out the “not takes” from the “hot takes” circulating Steelers Nation. Among the ...

In the latest SCU Podcast, Joe and Zach attack the recent wildfire which has spread from James Harrison’s comments about ...