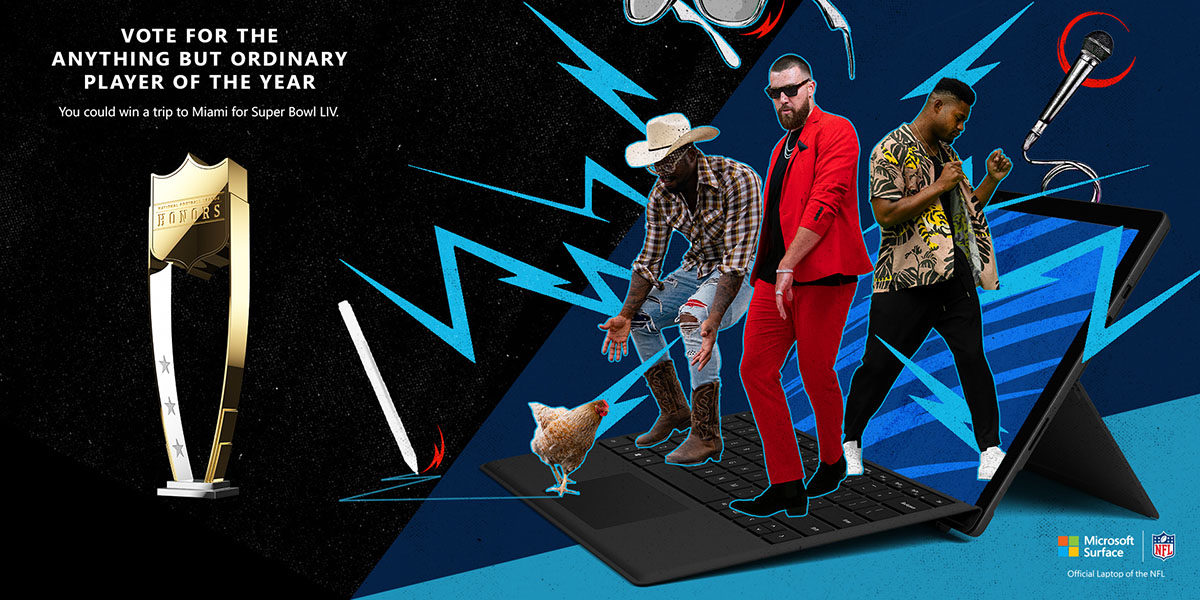 Microsoft Surface and NFL launch inaugural “Anything But Ordinary” Player Of The Year Award at NFL Honors, voted on by fans

Off-field passions celebrated through fan voting beginning Jan. 10, with chance to win a grand prize of trip to Miami and two tickets to Super Bowl LIV

REDMOND, Wash., (Jan. 10, 2020) – Since becoming an official partner of the NFL in 2013, Microsoft has continually provided the League and its players with the tools to innovate and improve performance on the field. Now, the League’s Official Laptop, Tablet, and Operating System partner will officially highlight and award the originality and creative talents of NFL players off the field as well.

On Saturday, Feb. 1, Microsoft Surface will present the first-ever “Anything But Ordinary” Player of the Year award at NFL HONORS, the League’s annual award show, to celebrate unique NFL player achievements and passions off the field. While innovation has fueled players’ physical performance and record-breaking statistics on gamedays, this award will honor players pushing the envelope through entrepreneurship, technology, and literary or creative arts in their day-to-day lives.

The Surface “Anything But Ordinary” Player of the Year will be announced alongside the League’s most prestigious awards, such as the Most Valuable Player, Walter Payton NFL Man of the Year, as well as the introduction of the newest members of the Pro Football Hall of Fame.

“At Microsoft, empowering every person and every organization to achieve more is our number one goal. And innovation plays a critical role in that,” said Eli Friedman, GM of Integrated Marketing at Microsoft. “Through our partnership with the NFL, we’ve worked closely with the League, coaches and players to provide Surface devices on the sidelines to help improve the performance and efficiency of the game, as well as the speed of instant replay. We’ve also witnessed the unique talents and creative and entrepreneurial endeavors that the players are pursuing off the field, where technology can play a critical role in helping them to achieve their goals. Being able to recognize those players and their passions is a tremendous opportunity, especially if it inspires the next generation of creators and innovators to stand out from the crowd and pursue their own ideas.”

Given that no one knows the players and their interests better than the fans of the League’s 32 teams, the finalist of the Anything But Ordinary Player of the Year award will be determined by fan voting. Microsoft will also send one lucky fan to Miami as part of the fan voting sweepstakes. One grand prize winner will receive two tickets to Super Bowl LIV and two tickets to NFL HONORS in addition to hotel, and airfare.

“The popularity of the NFL is due in large part to the players and their connection with fans,” said Dave Lynch, Vice President, NFL Partnerships. “The NFL and Microsoft coming together to honor them for their passions and interests is tremendous, setting the standard for innovation.”

“NFL players are as dedicated to blazing unique paths for themselves off the field as they are to elite performance on the field,” said Gina Scott, NFLPA Vice President, Partner Services.  “Whether it’s business or technology or in the community, they have continually shown that they are ‘more than just football players.’ This award presented by Microsoft underscores that and will inspire more players to get involved in other pursuits.”

This year’s NFL HONORS will take place on Saturday, February 1 at the Adrienne Arsht Center in Miami and will be hosted by Steve Harvey. The two-hour primetime special will be broadcast nationally on FOX at 8 p.m. ET/PT, and will recognize the NFL’s best players, performances and plays from the 2019 season.