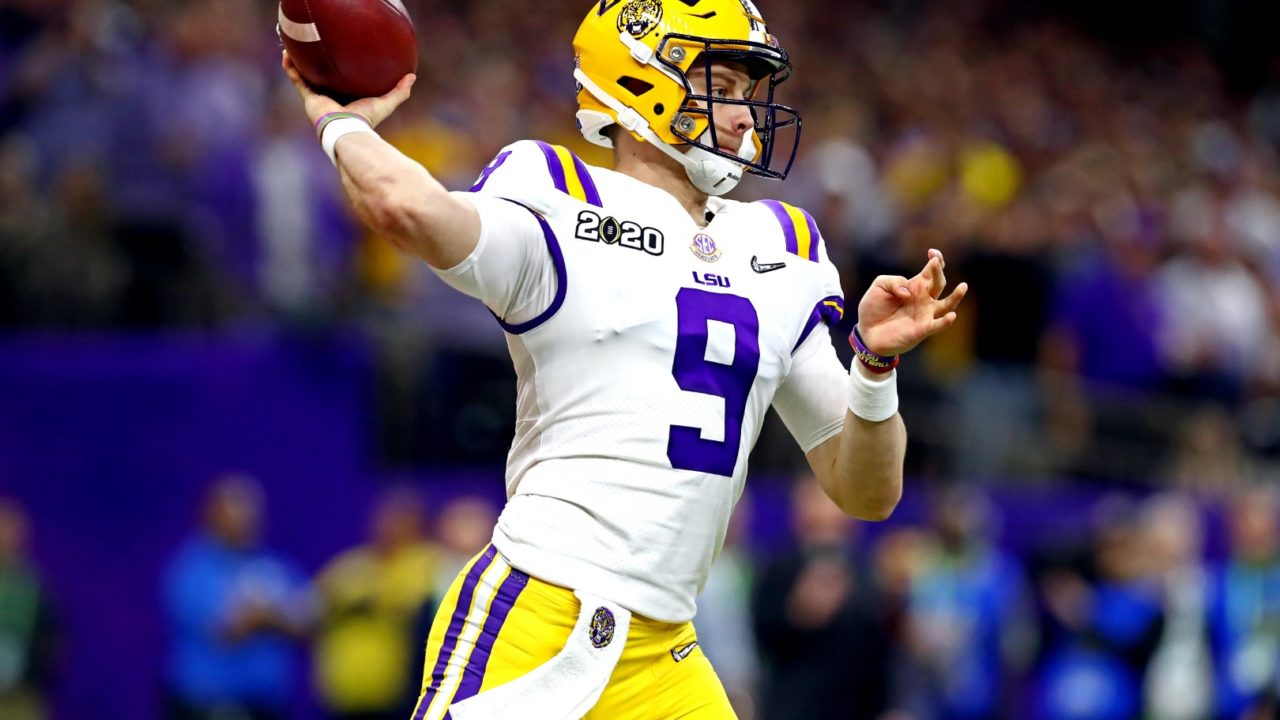 With LSU winning the National Championship on Monday, the college football season is officially over. All eyes have turned in the direction of the NFL Draft: several months away speculation will continue to run rampant.

Of course, the sure-fire number one pick appears to be LSU quarterback Joe Burrow, who set college football on fire by throwing for over 5,600 yards and 60 touchdowns (to only 6 interceptions) his senior season. All indications are that Burrow would be the first selection in the NFL Draft, taken by the team who currently holds that pick: the Cincinnati Bengals.

Burrow’s incredible 2019 season has set a sense of panic into some Steelers fans. Going to the Bengals means they would have to play against him twice a year. With Lamar Jackson and Baker Mayfield already in the division, and thought given to Ben Roethlisberger entering the final years of his pro career, the Steelers might be on the downswing.

However, I’m here to pump the brakes on crowing Burrow anything but a great college football player. Until he throws passes in the pros, it’s hard to gauge what his career might end up like.

For starters, it’s not as if he’s going to the best football team in the Bengals. Even what Cincinnati has to salvage due to injuries this season, they have several holes that will likely need filled to even support Burrow, should he go there and start in his first season.

There’s always a chance, likely slim given the amount owed in the final year of his contract, that Andy Dalton sticks around for 2020. With a coach entering their second year following the worst record in the league, Zac Taylor is going to have his hands full. Rookie quarterbacks aren’t always a lock to be good let alone great, and there will be a great amount of pressure to play the LSU stud right away.

But is that wise for a Bengals offense likely moving on from WR A.J. Green, TE Tyler Eifert, and others, along with a patchwork offensive line that’s failed to get fixed in several seasons?

Even if Burrow defies the odds it’s a tall task to set him up for success given what’s been left for him to work with. Granted, we have an entire offseason of free agent moves and draft picks to see how that may come together for Cincinnati: it could go good or it could go bad.

The key point is, we really don’t know.

Then there’s Burrow’s success as well. Mitchell Trubisky was knocked for only playing 31 games in college, with one full season as a starter.

Burrow, who transferred from Ohio State to LSU for his Junior year, didn’t exactly light the world on fire in 2018. He threw for 2,894 yards and 16 touchdowns to 5 interceptions with a 57.8 completion percentage.

He appeared in a total of 28 games for the Tigers, which could start sticking as a “buyer beware” during the draft process. (Not that I personally think it would shy any teams away from taking him, but I do think someone will make that comparison!)

Then there’s the long list of Heisman Trophy winning quarterbacks who didn’t pan out in the pros. The jury is still out on youngsters like Lamar Jackson, Baker Mayfield, and Kyler Murray, but we’ve already seen the path of others.

Marcus Mariota was benched Ryan Tannehill in Tennessee this season. Jameis Winston set a dubious 30-30 club record with at least 30 touchdown passes, and 30 interceptions, this season: something no other passer has ever done in the NFL, leading to speculation about his future.

Johnny Manziel? Hasn’t been in the league for years after flaming out with the Browns.

Robert Griffin III had a strong rookie season then fell out of existence, first losing his job to a later pick in the same draft class (Kirk Cousins) then bouncing around and out of the league before become Baltimore’s backup this year.

Cam Newton has had “Superman” seasons and has also been criticized as an inaccurate passer. He has yet to win the big one with seven playoff games played in nine years, but only three total winning seasons over that same span. (Which really should be eight seasons, due to his inability to play but two games in 2019.)

How about other previous Heisman winners such as Sam Bradford and Tim Tebow? (They’re out of the league.)

Troy Smith? He was from Ohio State for those of you who forgot – the Steelers even had him on their roster at one point, but he didn’t even make it to training camp that year.

There’s also Matt Leinart, Carson Palmer, Eric Crouch, and Chris Weinke in the 2000’s, as well as Ty Detmer, Gino Torretta, and Danny Wuerffel in the 90’s. Going back even further, Doug Flutie may be remembered as the most famous Heisman quarterback flop of my own lifetime.

And I didn’t gloss over Palmer being the best of that bunch: but he also bounced around the league eventually and never won a postseason game with the Bengals anyway, despite having the likes of Terrell Owens and Chad “Ochocinco” Johnson

Needless to say, even if Burrow becomes an overnight sensation that the Steelers have to contend with twice a season due to their division schedule, that also becomes a headache the Browns and Ravens would also have to deal with too. I don’t see a negative in that logic, as giving a blow to either of the other AFC North teams, rather than being a doormat and instant victory each time the matchup, could only help the Steelers when it comes to division standings and playoff contention too.

And looking this far ahead in the crystal ball only clouds what the Steelers might end up doing in years to come. Who’s to say they won’t have their successor to Roethlisberger and maintain the standard they’ve set so far this century?

That’s why fans shouldn’t be so quick to be concerned about things that are out of everyone’s control. Even the Bengals can’t predict how taking Burrow may impact their franchise at this time. An educated guess would be that he elevates them as a franchise quarterback, but as I’ve shown throughout this article, at this time, that’s only a guess: not a given.