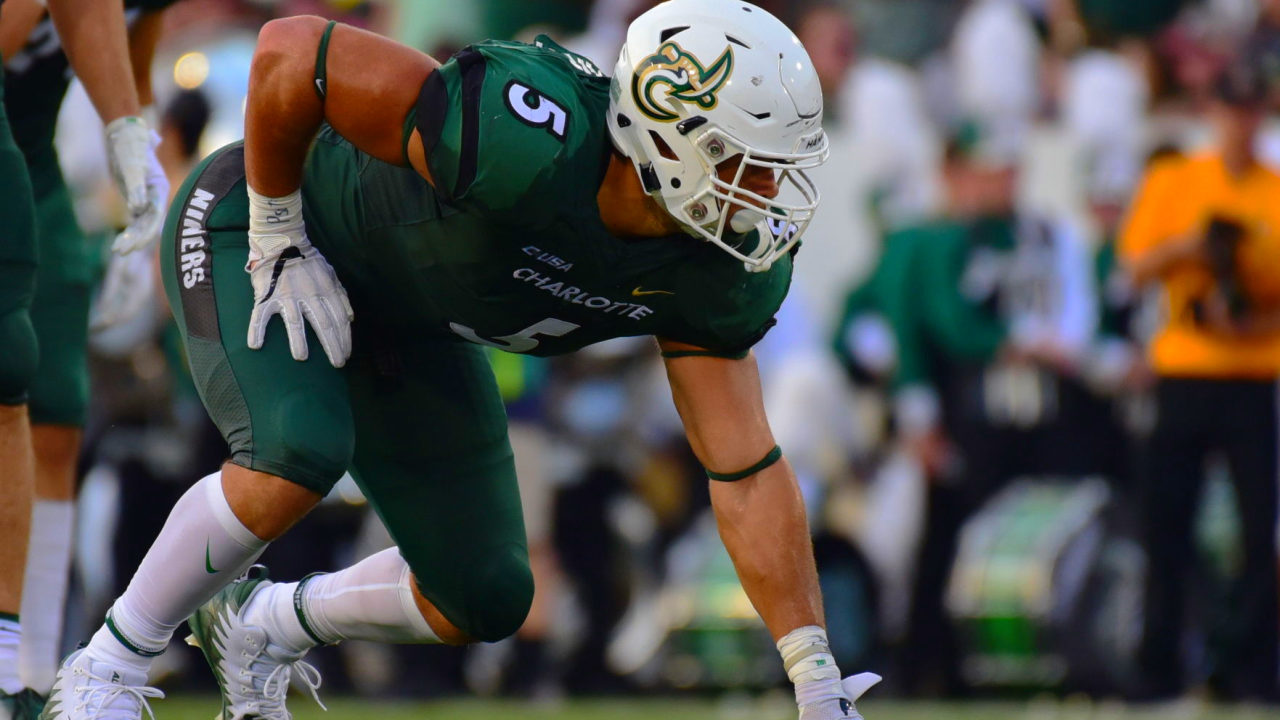 The 2020 NFL Draft saw the third round stretch late into the night on Friday. NFL Commissioner Roger Goodell, who announced every pick, looked exhausted and all Pittsburgh Steelers fans wanted was to find out who their team would select at No. 102 overall. The wait was worth it after UNC Charlotte star Alex Highsmith’s name was called.

Highsmith has the type of character that the Steelers covet. He’ll be the first person to admit that faith and family are where his heart is most, even though he’s proven to be one of the most notable CUSA athletes, ever. The former UNC Charlotte defensive end was a kid that collegiate programs overlooked as a potential prospect out of Ashley high school. Highsmith had grown up with football but it wasn’t his real love until his junior year. His heart changed. Highsmith worked hard and became a walk-on for coach Will Healy; the man who told the young man to enter the 2020 Pro Football Combine with the mindset that he belonged there with prospects from much bigger programs.

“Coming in (to UNCC) as a walk-on, I just wanted to prove people wrong and show people that I could play,” Highsmith told Sam Palian of Niner Times. “I just wanted to keep my head down, be the first one to enter the building and the last one to leave… people didn’t want me, so that’s one of the things that motivates me as well.”

After spending his redshirt freshman season working on strength and learning a new position, Highsmith earned a scholarship. When Healy brought Marcus West, a pass-rush specialist, in at UNC Charlotte from Minnesota, Highsmith hit a new level.

He finished his career at Charlotte ranked fourth in the nation with 14 sacks (2019) and was named to the All-Combine team (by NFL.com) as an edge rusher even though he can play at outside linebacker (edge) or defensive end. Highsmith recorded the fourth-fastest 40 time (4.7 seconds) among all defensive linemen at the combine.

NFL.com’s Nick Shook said of Highsmith, “(He is) extremely athletic… his spin move on the five-bag rush-move drill was a work of art, as was his dip on the fourth bag, and his hoop-running performance showed just how smooth he can be around the edge… combined with his (40 time), 10-foot-5 broad jump and 33-inch vertical leap, Highsmith proved he can develop into an effective edge defender if he can add strength at the next level.”

Speaking of @highsmith34, Did you know he had a pressure rate of 16 pressures every 10 minutes of game play? That's INSANITY.

And as the chart shows, he got BETTER as the season went on. Big weekend for him and the team lucky enough to get him! pic.twitter.com/v4cCppF1bX

https://t.co/lk1MW2MWOo
Highlights of Alex Highsmith. I've watched him in person and must say he will be a great player on this defense.

Whether the Steelers move him inside to take the spot that Javon Hargrave held, or groom him behind Bud Dupree and T.J. Watt remains to be seen. With raw talent and true athleticism, his maturity and leadership qualities should help him and the Steelers as a team. This is a pick that ‘The Chief’, Art Rooney, would smile over; the man loved a guy who had real character. Highsmith looks to slide into a Steelers defense that was already improving in 2019 and looks to be even better in 2020.