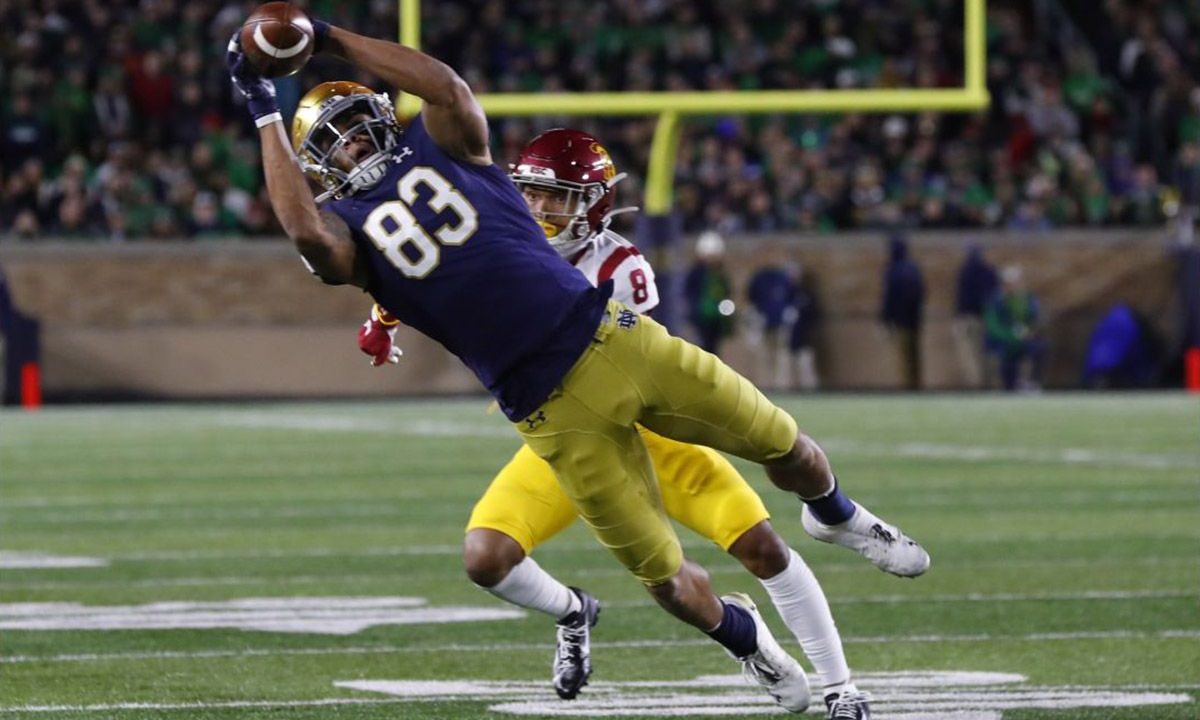 Chase Claypool likely suffered from being a member of what was largely considered one of the deepest wide receiver classes in recent draft memory. Most years, Claypool would likely be considered a fringe 1st round prospect, due in large part to his physical traits and abilities. While he fell to 49th overall, there is still a lot to love about Claypool’s game.

When breaking down his film from Notre Dame, you can’t talk about Claypool without first acknowledging the aforementioned physical traits. Standing 6’4″ and 238 pounds, Claypool is a physical presence with elite size and length that is relatively unmatched in the Steelers’ group of receivers. Beyond his size, he boasts impressive speed, running the 40 yard dash in 4.42 seconds at the NFL Combine. This speed is often on display on vertical routes, where Claypool has shown the ability to be very good when the ball is being pushed down the field. When working across the middle of the field, Claypool uses is size and awareness to feel the spacing in Zone coverage and again uses his size to beat Man coverage. When separation is lacking, he displays an elite ability to high point the football and snatch contested passes away from defenders using his length and physicality. His body control and positioning is also very good, allowing him to make adjustments on passes that are off the mark or awkward to come down with. Once he gets into the open space, Claypool devours huge chunks of yardage with long strides and increasing speed and is often tough to take down in these areas of the field due to his strength and big frame.

When the ball isn’t in his hands, Claypool embraces the secondary roles of receivers as run blockers. He looks to bury his opponents using a relentless motor to displace defenders and open up running lanes. His impact doesn’t stop there, as he was also a stand-out on special teams in college, particularly on coverage units. In the NFL, this will only help in his abilities to see the field sooner rather than later.

Claypool possesses exciting speed but it can be overshadowed by his release off of the line of scrimmage. When facing Press coverage, he has shown only an adequate job working through aggressive corners that are willing to stand up against his size. In the NFL he’ll need to improve in this area, as teams often employ defensive backs that are willing to get in your face on a regular basis. He can help himself accomplish this by more effectively using his body and releases to attack the field or boundary leverage shown by defenders. In relation to his speed, Claypool often needs to build up to his 4.42 40 time, which can be held up by Press coverage at the line of scrimmage. This leads to poor separation, where Claypool often struggles and forces him to make more contested catches than what is likely necessary in the NFL. While he spent a lot of time working vertically with his routes, he showed inconsistency in and out of breaking routes, often requiring more steps than needed to breakdown, sink his hips, and explode out into a different direction. There were reps where he was able to do this very well however, indicating to me that with continued coaching, he can show steady improvement with diversifying his route tree effectiveness. Once the ball was in the air, there were some times where Claypool would seemingly have lapses in concentration by not looking the ball in, which would lead to the occasional dropped pass or late-reaction body catch.

Fit with the Steelers

Claypool made his mark at Notre Dame as being a potent deep threat on the boundary and a fearless target over the middle of the field. He brings versatility to the Steelers’ wide receiver room, which is highly coveted (and virtually required) by the team. Even though some of his most exciting plays came on the boundary, Claypool has ample experience playing in the slot, which helps with the offenses formational and schematic flexibility to really exploit matchups on defense. That being said, his best fit will likely be on the outside in what would be considered an X or Z role. This way, he can put his vertical prowess on full display and keep defenses modest over the top, which could also open things up for players like JuJu Smith-Schuster, Diontae Johnson, and James Washington. In the run game, it wouldn’t surprise me to see Claypool flexed in more towards the box as almost a “move/slot tight end” to take advantage of his abilities in the run game. JuJu, Washington, and Vance McDonald also show tremendous willingness as blockers, giving the Steelers plenty of muscle to help spring runs on the perimeter for the Steelers’ backfield. Right out of the gate, I fully expect Claypool to also make an impact on special teams while he tries to build chemistry with Ben Roethlisberger and works on some of the route running and release nuances that he struggled with at times in college. There will almost certainly be packages for him very early on, particularly in the red zone and on plays involving vertical concepts, both of which are areas where he could shine while trying to make a name for himself. I am all about putting players in positions to maximize their abilities and use their strengths to their advantage and the same applies to Claypool, especially early on during his rookie season.

You simply can’t teach the natural traits that Claypool has. His size, strength, speed, hands, and physicality all make him a prospect that projects extremely well in the NFL with the upside of being a true mismatch machine. What also makes Claypool such an exciting player is the fact that many of his flaws are technical and correctable with NFL coaching. Working on your footwork, releases, and breaks can all improve with patient coaching and guidance, something Claypool will likely be afforded due to the Steelers already being fairly set with their top three receivers going into the season. While there is tape that displays these technical weaknesses, there is also a ton of tape that shows him doing these things very well. For Claypool, the name of the game is improving his consistency by gaining experience. If he and the coaching staff can take the time to help improve these coachable weaknesses while in the meantime utilizing his tantalizing strengths as a vertical receiving threat and possession receiver in the slot, the Steelers have a dangerous weapon on their offense for years to come.