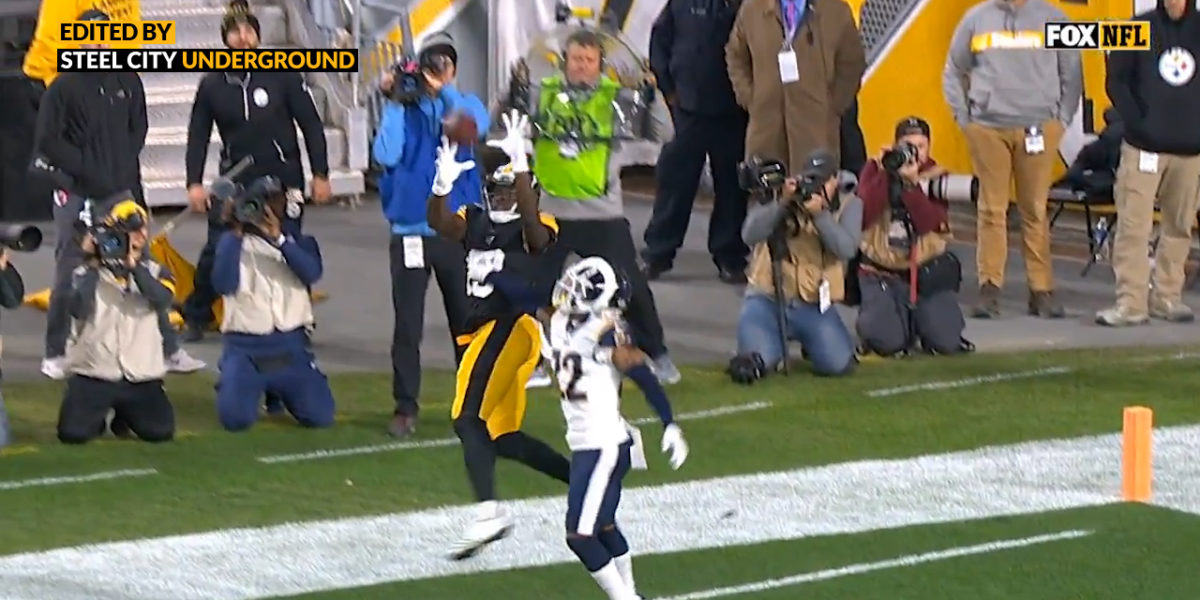 It was Week 10. The Steelers were in the final leg of a three-game home stand following their bye week.

Pittsburgh entered that bye with an unlikely road win against the Chargers, getting them to 2-4. With a win on this Sunday afternoon game against the Los Angeles Rams, the Steelers could climb above .500 for the first time during the 2019 season.

However, it wouldn’t be easy.

The clash at Heinz Field was a back and forth affair for both offenses. After a bad snap resulted in a defensive touchdown for the Rams, Steelers quarterback Mason Rudolph got Pittsburgh back on track with a nine-play 73-yard series that evened up the score when he found James Washington in the end zone for a touchdown.

On the first play of the series, Rudolph hit JuJu Smith-Schuster deep on the right side of the field for 20 yards. With the defense offside, it became a free play.

Two plays later, Rudolph hooked up with Diontae Johnson for a 30-yard pass-and-catch that put the Steelers at the Rams’ 29-yard line. The drive nearly turned into a disaster when Rudolph threw a ball to Johnson that was intercepted by Nickell Robey, who returned the ball 14 yards.

Thankfully, Jalen Ramsey was called for defensive pass interference and Eric Weddle was simultaneously called for defensive holding. Accepting the pass interference call, the Steelers worked some short plays until with 40 seconds left in the first quarter, on second-and-goal at the Rams’ three-yard line, Rudolph threw a high pass that allowed Washington to show off his vertical ability and athleticism.

The play would be reviewed as it appeared that Washington’s knee may have touched out of bounds before he got his second foot down. After various angles, the call of a touchdown was upheld.

It wasn’t a long throw by any means but Rudolph’s relationship with Washington showed in the way he put the ball where his former collegiate teammate would be able to make a contested play over the top of the defender. It worked. Washington’s awareness to get both feet down inbounds gave the Steelers their first points in the game.

The Steelers would go on to earn a defensive touchdown in the second quarter thanks to a Javon Hargrave strip-sack of Jared Goff that was recovered and returned by Minkah Fitzpatrick for a touchdown.

After the half, the Steelers only allowed the Rams to earn five points as Chris Boswell kicked a field goal for a 17-12 win that moved Pittsburgh to 5-4 on the season.