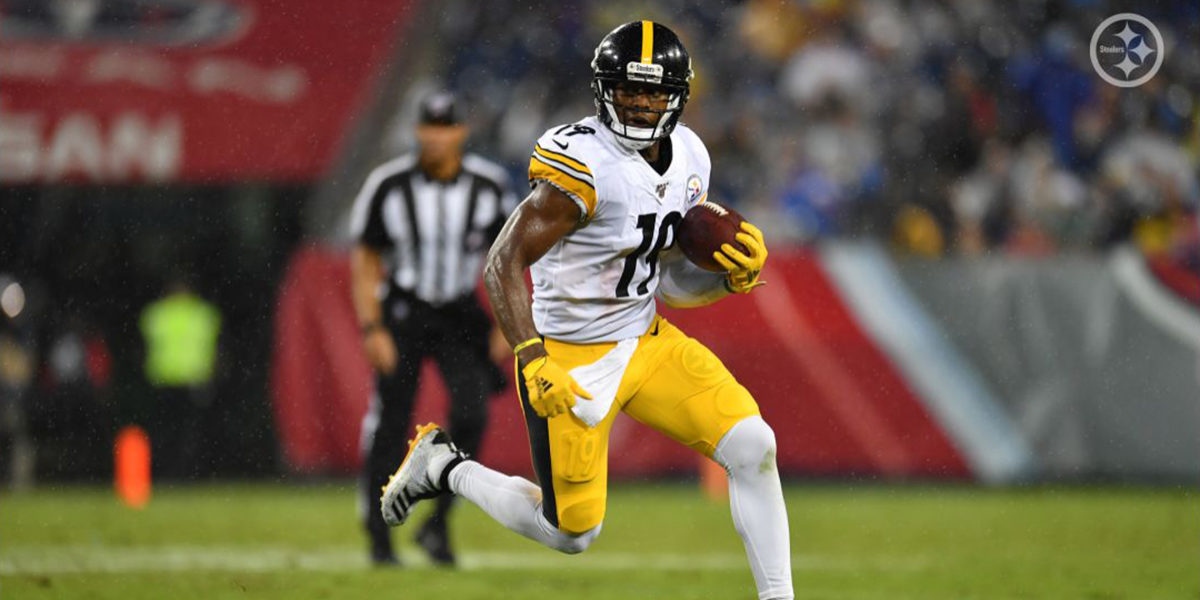 What if the Steelers do move on from Juju Smith-Schuster?

Well, now there is another looming unknown with the Pittsburgh Steelers, the future with JuJu. With one year left on his rookie contract, the Steelers have a very tough decision ahead of them.

While I want to see JuJu be a Steeler for life, it is important to ask this question: “What if?”

If that day comes, who on this team will be ready to fill JuJu’s shoes as the number one target for the offense?

It is a hard question to answer because this WR group is one of the most talented groups this team has had in almost a decade. With James Washington, Diontae Johnson, and Deon Cain, they have a great variety of skill sets in their passing offense.

It also got even better with the drafting of Chase Claypool, who may become an impact player sooner than expected.

After a couple of days thinking about this question, I have created my list of who could replace JuJu as the number one receiver for this offense.

I believe that James Washington could end up initially being the number one receiver. This was a tough decision to pick between Washington and Johnson. I love what both players bring to the table. Watching tape on James Washington has helped me realize what potential he has to be a starter for this team.

In 2019, Washington finished with 44 receptions for 735 yards. He averaged 16.7 yards per catch with 3 scores. He contributed a lot of production for being the third receiver.

Those numbers could have been even higher with Ben Roethlisberger. He is another big-body receiver that thrives on combat catches one on one. He has displayed his strong hands and deep threat abilities which have resembled some of JuJu’s talent.

One factor that is not talked about is that he was Mason Rudolph’s number one back at OSU. If Mason does end up taking over for Ben, he already has multiple years of experience and chemistry with James.

I encourage you to go back and watch their college highlights. If that tandem ends up leading the Steelers offense, it would be very explosive.

If James Washington is my “1A” then Diontae Johnson is my “1B”. Diontae appeared out of nowhere in 2019 and gave a lack-luster Steelers offense a bright spot to watch.

Johnson led all rookie receivers with 59 receptions and finished with 680 yards and 5 TDs. His route-running, acrobatic knack for the ball, and his ability to make guys miss in open space are very promising for his future. I cannot wait to see how he performs this year.

Between these two, it would be a very interesting competition to see who would make the starter.

The addition of Chase Claypool presents a new, under the radar weapon for this offense. His height and speed present a new threat for opposing secondaries to deal with. His ability and enthusiasm to block will help out the Steelers running attack.

While Claypool is a very exciting addition, it also presents a question into the Steelers’ plans for JuJu.

Do I want Smith-Schuster to stay?

JuJu has been a playmaker ever since he was drafted. I want him to remain a Steeler for his entire career. However, at the end of the day, the NFL is a business and the Steelers must make moves that keep the team as competitive as possible.

If that day comes if JuJu leaves the steel city, rest assured that we do have the pieces in place to help us prepare the next man up.

2 responses to “What if the Steelers do move on from Juju Smith-Schuster?”