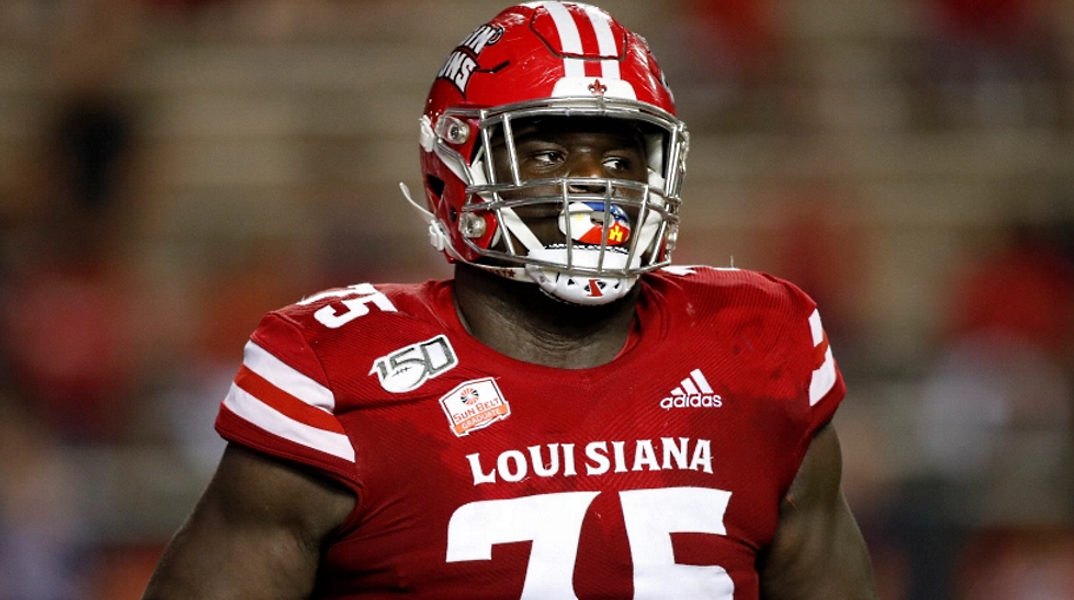 Next up, Kevin Dotson.

Dotson was not invited to the 2020 NFL Combine.

Dotson has solid height, weight, and arm length, and a good wingspan. He has very good hand size, particularly for an interior offensive lineman. Possesses a very broad frame with a muscular upper body, wide shoulders, and a barrel chest. Strong, solidly built lower body gives him a very good anchor. Possesses good overall athletic ability with good quickness and very good speed. Plays with elite explosiveness and functional strength. Adequate agility and balance due to occasionally playing stiff-legged with not much knee bend (will bend at the waist). Marginal footwork while working in space and in pass protection that can narrow his base and cause him to struggle changing directions laterally.

With the retirement of Ramon Foster and departure of B.J. Finney, the Steelers were in need of additional offensive line help this offseason. They made some progress in that area with the signing of veteran Stefen Wisniewski. In my eyes (and obviously the Steelers), this did not change the Steelers’ need to address the position on draft day. Kevin Dotson did not receive the same hype that some of the other linemen in this draft class did (including fellow Ragin’ Cajun offensive lineman Robert Hunt) but that should not be viewed as a negative to the type of player Dotson could be in the NFL.

Dotson is a developmental guard prospect with starting upside who you can win with in both a gap/power run scheme and a zone run scheme. Dotson is at his best when operating in confined spaces, utilizing down blocks, double teams, combo blocks, and quick pulls to be a true “people-mover” in the run game. His elite competitive toughness, play strength, and sound technical foundation stand out in the 2020 NFL draft class. He struggles with working in space, with maintaining lateral agility, and with his footwork, balance, and base in pass protection, particularly with longer 45-degree sets.

In Pittsburgh, Dotson will transition from his old right guard spot to compete for the starting job at left guard due to the vacancy left by Foster. I think he will be given every chance to compete for the starting job in 2020 but he has a few factors working against him at this point. His abilities as a run blocker should allow him to stand out early on in training camp by creating giant holes for running backs behind him, but the biggest issue with his game is his footwork and balance in pass protection. Too often, he finds himself playing with higher pad level and a narrower base. This could prove to be problematic when trying to stay balanced on longer pass sets, which is an essential part of the Steelers’ vertical passing game. He will realistically need to improve in this area before truly pushing Wisniewski (or even Matt Feiler) for the starting left guard gig. The Steelers might also feel compelled to give Dotson time to develop if they see enough progression from Chukwuma Okorafor or Zach Banner to hold down the right tackle spot and automatically move Feiler, their versatile chess piece, inside. Because of the ongoing pandemic, Dotson is also being robbed of the opportunity to begin working on the field this spring with the Steelers’ coaching staff to improve on these technical issues with his pass protection.

I should also note that Dotson was reportedly working on learning center during the draft process, which would add another feather to his cap in terms of utility and versatility to the Steelers’ offensive line. Being able to play all three positions along the interior is a trait the Steelers covet in their interior offensive linemen.

As previously mentioned, Dotson was not invited to the 2020 NFL Combine and was widely considered to be the biggest snub in the annual event this year. Had he been invited to the combine and the pandemic had not impacted his ability to have a traditional Pro Day, pre-draft visits, and pre-draft workouts, I believe based on his tape that Dotson could have been a day two selection in the draft. Falling to the fourth round like he did provided the Steelers with fantastic value to select a lineman who should compete for the starting left guard position as a rookie in 2020 (and could lock that spot down if he flashes enough in training camp and the preseason) and has all of the tools to potentially earn that spot by year two in 2021 if he is unable to do so this year.

If he can improve his footwork and balance in pass protection and make his run blocking even stronger than it already is, Dotson has all of the traits you look for both physically and mentally to become a long-term starter at guard in the NFL.