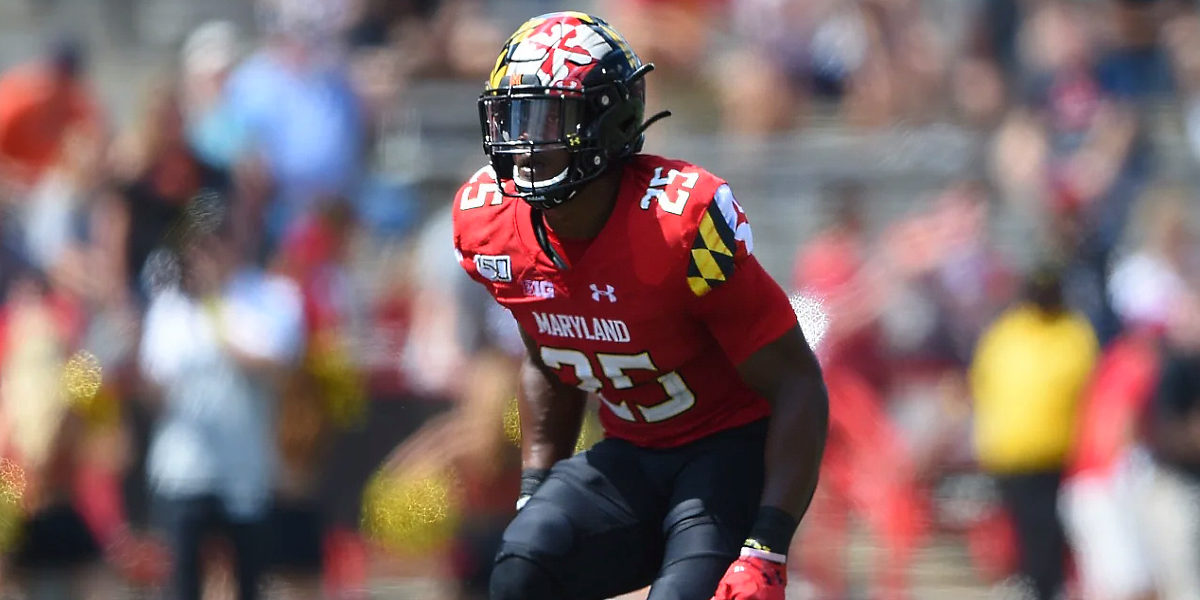 Next up, Antoine Brooks, Jr.

Antoine Brooks Jr. is a senior who started in 12 games in 2019 and 35 games over the course of his career at Maryland. As a freshman, he was primarily a special teams contributor for six games before being suspended for the remainder of the season. As a sophomore, Brooks played in 12 games and started 11, spending most of his time as a nickelback. During this season, Brooks led all-Big Ten defensive backs in tackles for loss (9.5) while also leading the team in solo tackles (53) and finishing second in total tackles (77) and tied for second in interceptions (2). Brooks received honorable-mention All-Big Ten as a sophomore. In his junior year, Brooks started all 12 games and led the team in tackles for loss (9.5) and finished third in tackles (68). His performance this year led to him being named second-team All-Big Ten. As a senior, Brooks again started 12 games while leading the team in total tackles and solo tackles (87 and 69, respectively), tied for first in passes defended (5), and finishing second in tackles for loss (8.5). Brooks finished the season with 5.8 solo tackles per game, which was first in the Big Ten and ninth in the country. His production as a senior led to another second-team All-Big Ten nod. After his senior season, Brooks was also named Maryland’s Most Valuable Player.

Brooks suffered a broken wrist and a compound leg fracture during his senior year of high school.

Brooks has adequate height, arm length, and hand size but very good weight for a safety. He possesses a compact, very muscular, filled out frame that he uses to his advantage to keep a low center of gravity and deliver heavy hits when given the chance. Brooks has marginal overall athletic ability with very good explosiveness and solid footwork but adequate acceleration and quickness, marginal agility and straight-line speed, and poor change of direction skills. His issues with agility and change of direction are mostly due to hip stiffness and tight leg movement. His marginal straight-line speed will cause struggles when recovering in coverage. He plays with very good functional strength for the position.

The Steelers made one of the biggest splashes of the 2o19 season when they made the unprecedented move of giving up their first-round pick in the 2020 NFL Draft to acquire Minkah Fitzpatrick to help shore up their secondary alongside Terrell Edmunds. Needless to say, Fitzpatrick more than did his part by turning in a stellar All-Pro performance in his second season in the NFL. Behind Fitzpatrick and Edmunds, things were a bit murkier going into the 2020 NFL Draft, as much of the depth was filled with question marks and lacked any type of proven experience. Marcus Allen has yet to solidify his role on the roster, Jordan Dangerfield is largely a special teams standout, and John Battle and Tyree Kinnel are newer additions to the team. The Steelers were expected to address the position at some point in the draft and the expectation was that they would look for a safety who could fit more of the “box safety/dimebacker” role that they had hoped to fill with players like safety Morgan Burnett or hybrid linebacker Mark Barron. The Steelers made Antoine Brooks Jr. their sixth-round selection in the hopes that he can fit that role for their defense.

Brooks is a developmental box/strong safety prospect with upside as a role player and key special teams contributor who you can win with. Brooks would be best utilized in Press-Man coverage against tight ends and shallow Zone coverage where he can attack underneath routes in front of him in tighter spaces. He is at his best when he is allowed to be an enforcer in the box and as an overhang defender near the line of scrimmage. He excels as an elite run support defender, is a very good tackler, and brings elite competitive toughness to both the defense and special teams. His struggles with hip stiffness and straight-line speed present issues when trusting him with deep Zone coverage responsibilities. He also lacks the quickness in Off-Man coverage to mirror faster wide receivers and cover them downfield and the range required to play the deep middle of the field and close on passes away from him.

With the Steelers possessing a loaded defense at all three levels, Brooks will be given time to find his niche on the defense while getting his hands dirty on special teams. Just like Chase Claypool and Alex Highsmith before him, there will be plenty of opportunities for Brooks to shine in this area while adjusting to the nuances of what is required of him on defense. Realistically, Brooks athletic limitations covering players deep downfield will force him into being more of a box defender, but that isn’t a bad thing. His skills near the line of scrimmage are more reminiscent of a linebacker with how fearless he is and how disruptive he can be when defending against the run and blitzing the quarterback (something we have seen quite often from players like Mike Hilton). As a nickel-package defender, the Steelers can use his skillset to also play Man coverage against tight ends or underneath Zone coverage on shallow areas of the field. This might prevent him from ever truly becoming an every-down starter but this type of role could get him on the field quickly and add some juice to the Steelers already fearsome defensive unit. Brooks also has the abilities and mindset of a fearless and selfless special teams ace, where he could flourish for years on coverage units.

The concerns surrounding Brooks’ fluidity in coverage might be something he never overcomes as a player but that shouldn’t prevent him from finding his place on this defense. Very few safeties in this draft class possess the tackling and run defending talents that Brooks has and could make him a terrific enforcer on the Steelers’ defense and special teams.