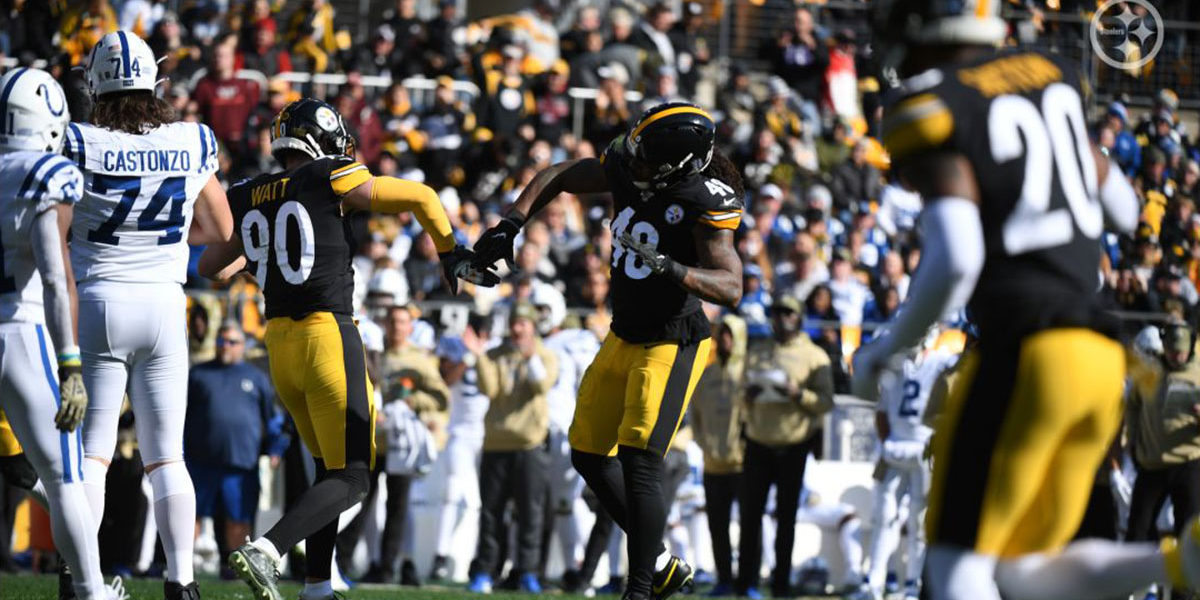 2019 Recall: Steelers nearly screwed out of second-straight home win against the Colts

The 2019 Steelers were still looking for an identity heading into their Week 9 encounter with the Indianapolis Colts. The offense had started three different quarterbacks and the team had looked sluggish coming off of a bye week on Monday Night Football a week prior against a winless Miami Dolphins team.

However, the Steelers would climb back to 4-4 with an ugly win over the Colts: but it wasn’t ugly for the reasons you’d assume.

The game started with the Steelers offense, led by Mason Rudolph. For fans who tend to forget details about the previous season, this next set of sentences truly highlights why Rudolph wasn’t the only person to blame in regard to the Steelers 8-8 season.

During the week the team let go of free agent wide receiver Donte Moncrief, who had tipped and dropped pass problems – several of which led to interceptions (including a target from Rudolph weeks earlier that should’ve been caught but was picked off).

Moncrief became a casualty of the compensatory pick formula, as he weighed against the Steelers favor of acquiring what would be an additional third round draft selection – this was due to former Pittsburgh linebacker L.J. Fort being cut from the Philadelphia Eagles. Moncrief had to be released before the second half of the season began for the Steelers, or they could lose their pick.

The business choice was an easy one, but for fans who thought Rudolph was an interception machine or had forgotten how Moncrief contributed to that in some way, likely forgot that JuJu Smith-Schuster let one bounce off of his hands on a deep pass attempt that should’ve been caught – and was, but by the other team, on this first drive of the game.

It would be Mason’s only interception on the day as he completed 74.3% of his passes overall including a touchdown connection later – and should’ve also had another big play to Diontae Johnson who was robbed with a ticky-tack pass interference call. (As for JuJu, he would end the day with only three total catches for 16 yards.)

Mike Tomlin would challenge two PI penalties in this game: and lose them both.

But before we get to those, we have to rewind to the Steelers finding a defensive identity.

For the Colts, they would lose QB Jacoby Brissett early in the game and have to go with their backup, Brian Hoyer, in his place. Indy got out to a 10-3 lead and looked to add to it as Hoyer discovered the impact of Steelers safety Minkah Fitzpatrick.

Fitzpatrick blew in front of Hoyer’s intended target, TE Jack Doyle, picked off the pass, and would surge down the sideline for a 96-yard touchdown.

Fitzpatrick had become a difference maker in only his sixth game with the Steelers since being traded in Week 3 from the Miami Dolphins. This play not only took points off of the board for the Colts, but added them for the Steelers and could have been the single-most important play in aiding Pittsburgh to victory.

Bud Dupree also wrecked havoc on Hoyer and company, adding two sacks, including a strip-sack and a fumble recovery.

While JuJu had a bad game and Diontae Johnson was equally absent (despite being robbed of a big play, he would only catch one other pass for a whopping three yards), there were other offensive contributors who led the Steelers to victory.

Foremost, it was Trey Edmunds (not to be confused with his brother and Steelers safety Terrell) who broke out a big 45-yard run play. Edmunds would finish the day with a dozen carries for 73 yards.

James Washington arrived in this game too. Rudolph’s college teammate appeared to finally be on the same page and progressing. Washington would finish with four catches for 69 yards, including a 40-yard gain and a key third-down snag which kept a field goal scoring drive going in the first quarter.

The Steelers offense would battle back-and-forth with the Colts on the scoreboard. Vance McDonald would score his last touchdown of the season during this game, while Chris Boswell was responsible for scoring 14 total points, including the go-ahead field goal with around six minutes remaining in the game.

Following that Boswell conversion is when things almost went south for the Steelers. I’d be remiss to not mention what led to the most memorable part of this game: a call which nearly cost the Steelers the win.

Brian Hoyer badly overthrew a deep pass intended for Colts WR Zach Pascal, who was being covered by Steelers CB Steven Nelson. The two players would get tangled up downfield, with Pascal seemingly initiating contact, stopping short of a ball he couldn’t catch up to and the two players going to the turf.

The intended pass would then sail over five yards further downfield!!

Naturally, the referees threw a flag on the play and gave the Colts a fresh set of downs just as the Steelers defense had appeared to force a three and out.

As mentioned above, Mike Tomlin would unsuccessfully challenge this play, and yet one more involving the same two players in what was a similar ticky-tack play that mirrored a call made earlier in the game except with a different result. (In a previous play Colts coach Frank Reich challenged to receive an uncalled pass interference that would be denied at the end of the first half.)

The referees stuck with their bad decision that was inconsistent with the one Reich had challenged. Of course they weren’t going to overturn either bad call and in both cases the Steelers got screwed out of 35 and 19 yards respectively.

Those calls gave the Colts an opportunity to win the game with a 43-yard field goal with 1:14 remaining in the game.

The Pittsburgh Steelers succeeded in stacking their third victory of the season in a back-and-forth battle with the Indianapolis Colts, by a final score of 26-24. They would climb to .500 for the first time in 2019 with a record of 4-4 with one more home game in the three-game stand, this time against the Los Angeles Rams the following week.

Stay tuned for more in next week’s recall.