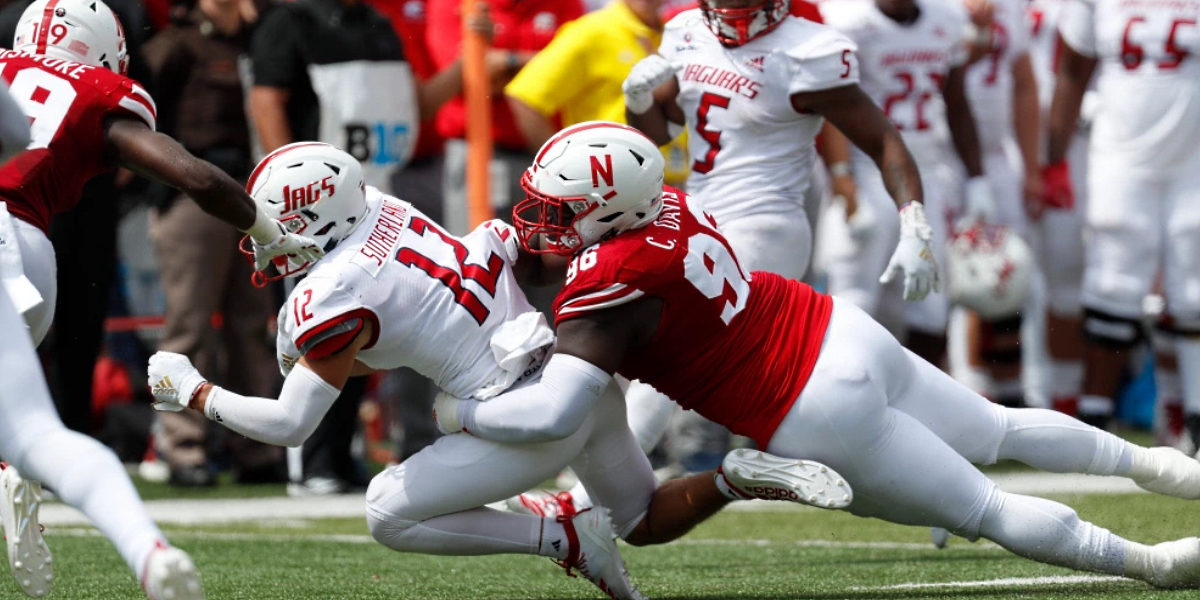 Next up, Carlos Davis.

Carlos Davis is a redshirt senior who started 11 out of 12 games in 2019 (missed one game due to injury) and started 39 total games during his time at Nebraska. Davis was a versatile defender for Nebraska, making starts as a 3-, 2i-, 1-, and 0-technique defensive tackle and as a 4- and 5-technique defensive end.

As a redshirt freshman, Davis was named Honorable-Mention BTN All-Freshman Team and as a redshirt junior, he was named Honorable-Mention All-Big Ten. While at Nebraska, Davis was an eight-time letterwinner (four letters in both football and track & field) alongside his twin brother Khalil, making them the first eight-time letterwinners at Nebraska in over 50 years and just the 8th and 9th to accomplish the feat in school history.

It is worth noting that Davis tallied 5 passes defended in 2018, which was the most by a Nebraska defensive lineman since Ndamukong Suh had 10 in 2009.

In addition to his experience on the football field, Davis was also a two-time All-American in track & field for discus, being named Honorable-Mention in 2018 and Second-Team in 2019.

Davis missed one game in 2019 due to an ankle injury.

Davis has adequate height and good weight with a thick, solidly built frame and a stout lower body but has poor arm length and hand size for an interior defensive lineman.

He possesses elite straight-line speed but has marginal overall athletic ability. His quickness is adequate with marginal agility and footwork that prevents him from efficiently changing directions laterally.

During the offseason, the Steelers biggest departure was without question Javon Hargrave, who traveled across the state to join the Eagles on a new lucrative deal. There was no denying the elite talent that Hargrave was for the Steelers’ defensive line, but in an age where nose tackles see the field less and less, the Steelers had to sadly allow Hargrave to test the market and allow him the freedom to truly maximize his value.

Heading into the 2020 season, the Steelers’ defensive line is still fantastic and deep, with Cam Heyward coming off of yet another All-Pro and Pro Bowl season and Stephon Tuitt returning from an injury during a season where he began to truly emerge as a standout defender.

The addition of Chris Wormley alongside returning linemen Tyson Alualu, Isaiah Buggs, and Daniel McCullers gives the Steelers plenty of options when trying to fill the massive shoes left behind by J-Wobble. So where does Carlos Davis fit into the mix?

Davis is a developmental two-down nose/defensive tackle prospect with backup upside along the interior. Davis is at his best when aligned as a 0-, 1-, 2i-, 2-, or 3-technique defender where he can operate in confined spaces and attempt to free up lanes for off-ball defenders in the run game.

He displays very quick, strong hands against the run and wins his one-on-one matchups by utilizing his size, hand placement, and leverage to take control of the blocks he faces. He plays with elite competitive toughness and a high-effort motor on each play with elite speed to chase plays down.

Davis’ poor pass-rushing abilities, underdeveloped pass-rushing toolbox, and marginal athletic abilities in terms of lateral agility and footwork decrease his value on clear passing downs and will be a sizable hurdle for him early on in his career.

While at Nebraska, Davis was moved all along the defensive line depending on the package, down and distance, etc. but in Pittsburgh, his role will likely be very similar to what we have seen from McCullers to this point: a true interior defensive lineman who spends most of his time between the B-gaps.

The Steelers still make use of the nose tackle position, whether it is having a true nose tackle in the game like McCullers or simply shifting someone like Heyward or Alualu down to play inside depending on what package is in the game.

If Davis is going to play his way into a roster spot in 2020, he is going to need to stand out as a run defender that can be incorporated into the Steelers’ primary defensive line rotation on early downs. Because of his lack of length and lateral agility, there is a chance that Davis might never become a factor as a pass rusher, but that really isn’t why you take a player like him to add to your roster.

In the 7th round of any draft, you are looking for players that have a few discernible traits that you hope to be able to build upon and get the most out of on the field. For Davis, those traits are his elite speed for a player of his size, his relentless motor, and his ability to hold his own against the run as a two-down interior defensive lineman.

While I think that he has a clear uphill battle to make the roster in 2020, a practice squad spot would be a great opportunity for him to try to develop his pass rushing skills while ironing out some of his lower body deficiencies as a run defender.

If he can diversify his pass-rushing toolbox beyond the predictable bullrush, Davis will greatly improve his chances of contributing to the Steelers’ defensive line rotation at some point early on in his career.

Davis isn’t Hargrave, but very few players in the NFL today are. That doesn’t mean that he can’t carve out a role for himself in Pittsburgh if given time to develop and I think he can do just that.