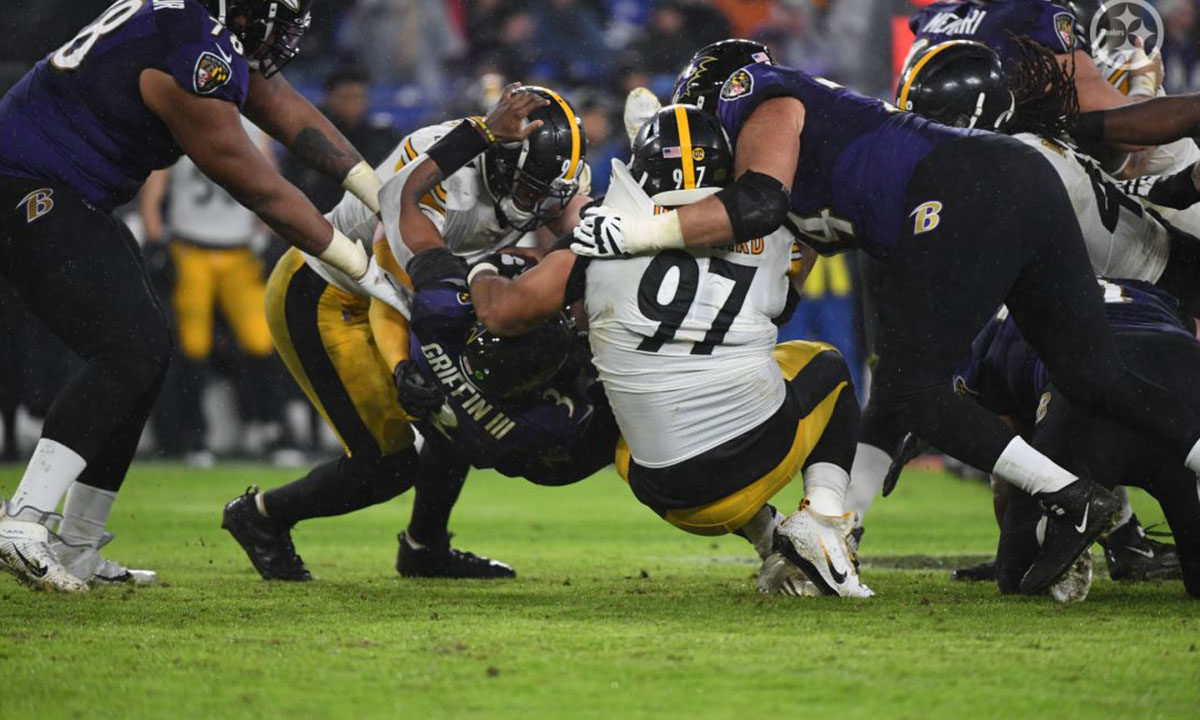 The Steelers 2019 season went from bad, to hopeful, to falling from grace with the rollercoaster ride coming to a sharp stop in Baltimore during Week 17.

Having already locked up the top seed in the playoffs, the Ravens had no need to play a handful of their top stars, including QB Lamar Jackson. This gave some hope for the Steelers faithful, who watched their team blow several chances to defeat Buffalo in their final home game two weeks earlier, and then lose a critical game on the road against the Jets, which had major playoff tie-breaking implications.

There was still a chance that if the Steelers could win against the league’s top team, they could sneak into the postseason. While that would be a tough mountain to climb, on the road, there was optimism that Baltimore sitting their starters could give Pittsburgh a needed competitive edge for an important victory.

However, it would be for naught, as the competitive balance had already been sharply shifted by a multitude of injuries not only throughout the season, but heading into the season’s final game. Poor offensive performances had already plagued Pittsburgh for the second half of the season, with the team bench Mason Rudolph in favor of Devlin Hodges, only to bench Hodges to go back to Rudolph the previous week – and Rudolph breaking his collarbone and being sent to injured reserve, meaning the team had to stick with Hodges again for the final game.

But that wasn’t the only dagger, as James Conner, who just returned against the Jets, was back on the shelf and Maurkice Pouncey was also ruled out against the Ravens. JuJu Smith-Schuster had just returned too but had been in and out of games throughout the season and had little rapport with either backup quarterback.

While this sounds like excuses for the Steelers offense, it’s more indicative of what happened in this game. Pittsburgh’s defense would hold the Ravens to two field goals to start, before the offense ran a ten-play 75-yard drive that saw them take their only lead at 7-6.

Then the wheels came off.

With the Steelers having just lost their one-point lead and falling behind by two in a now 9-7 game, Pittsburgh would get the ball back with 1:05 remaining in the first half, while also looking forward to getting the ball to start the second half.

But they would shoot themselves in the foot on each occasion. Duck Hodges was blitzed by Ravens LB Matt Judon, and as the Steelers quarterback tried to spin free, he loosely one-handed the football which was punched away. The drive would last three plays and go five yards.

The Ravens would get the ball back again with 45 seconds remaining in the second quarter and on the Steelers 23-yard-line. Baltimore would score a touchdown 4 plays later, extending their lead to 16-7 before halftime as the Steelers took a knee to stop the bleeding. Yet, they would come out to start the third quarter no better off, running three plays for a net total of two yards.

Following the three-and-out, Defensive Player of the Year candidate T.J. Watt showed up yet again with a big play, stripping the football from Ravens running back Gus Edwards on Baltimore’s third play of the drive.

The Steelers would get the ball on the Ravens 34-yard-line and eventually add three points to the scoreboard, their final points of the game.

Note: Diontae Johnson‘s would-be touchdown was also on this drive, but was ruled out-of-bounds with no challenge from Head Coach Mike Tomlin.

From there it was all Ravens. Fumbles, safeties, penalties and other self-defeating mistakes saw the Steelers give the ball back to Baltimore in the fourth quarter, with the Ravens adding points that Pittsburgh couldn’t answer.

Managing Editor Christina Rivers summed this up brilliantly in her post-game write-up from last December:

Ultimately, this will be a game that illustrated pure frustration on the part of the Steelers. For every big play made by Pittsburgh, there were at least two-three that went against the Steelers. A poor decision by Jordan Berry on a bad punt snap, two intentional grounding penalties on Hodges (including one that resulted in a safety due to the fact that he ‘ground’ the ball as he was in his own end zone), an unnecessary shoulder to Griffin by Watt after the outside linebacker nearly tipped the pass, a missed tackle by Mark Barron – all of them glaringly negated the nice things that the Steelers were able to accomplish because they were costly.

For those who forgot, the Steelers still had a stellar defense and were playing Baltimore’s backups, but even then, special teams would strike with their own snafus. Punter Jordan Berry failed to secure the snap, and worse, didn’t secure the ball after that, fumbling and allowing the Ravens to score a special teams touchdown to go up 26-10.

The aforementioned safety was the final nail in the coffin as the Steelers would look gassed and outclassed in a 28-10 defeat to close out the 2019 season.