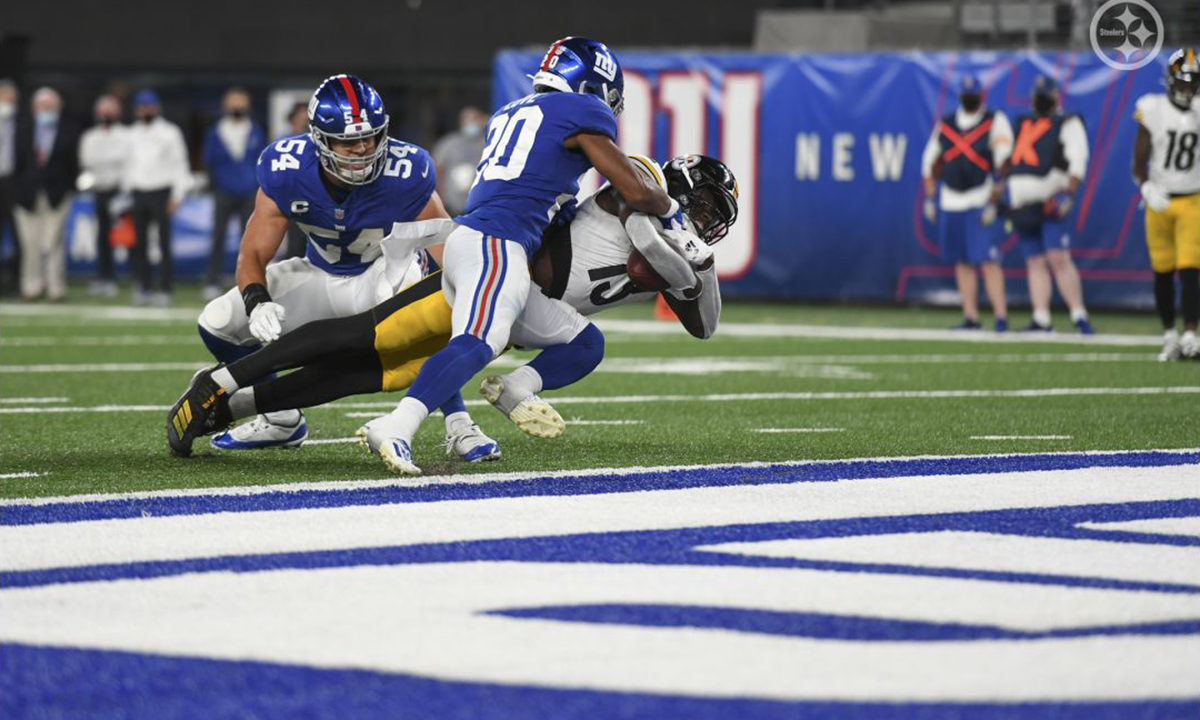 The Good, Bad, and Ugly column is a breakdown of several segments of every Pittsburgh Steelers 2020 regular-season game into each of a grading category of “good”, “bad”, or “ugly”. To get to the nitty-gritty, Travis Newton dissects three moments from each game which could be best classified under each of those labels.

The Steelers defense, which led the league in takeaways last season with 38, created two crucial turnovers in their Week One matchup with the Giants.

Pittsburgh was reeling to start the second quarter after giving up a 41-yard touchdown reception, which followed with a three-and-out offensive possession. Down 10-3, T.J. Watt halted the Giants’ momentum with an interception on the first play of the following drive.

Watt, Known for his ability to rush the quarterback, read the eyes of sophomore QB Daniel Jones and canceled his pass rush to sit on the check-down pass. Watt leaped in the air just a couple yards downfield from Jones and snagged the ball for the first Steelers’ takeaway of the season, showing his high IQ from the outside linebacker position. The interception set up the Steelers offense with great field position, which would eventually lead to their first touchdown of the game.

The Giants offense was rolling on their first possession of the second half, putting together a 19-play drive that was ultimately stymied by the Steelers defense. A great rush by Bud Dupree led Daniel Jones to show his youth by throwing an ill-advised pass into a crowd of defenders. It was veteran Cameron Hayward who came down with the interception in the endzone that crushed the nearly nine-minute Giants drive.

The turnover once again led to points for the Steelers offense as they drove down and put up three points off a Chris Boswell field goal.

Pittsburgh running back, James Conner, left the game early in the first half and was sidelined for the remainder of the game following a left ankle sprain. Conner, who is in the last year of his contract and has been prone to injuries, only amassed six carries for nine yards in a season where he needs to be on the field.

Conner’s replacement, Benny Snell, filled the void at the Running Back position surmounting over 100 yards in the game.

A late touchdown by the Steelers was shadowed by another injury, this time to a key offensive lineman. Zach Banner, who won the starting right tackle position during training camp, would have his season cut short after having his right leg rolled-up on. It was announced on Tuesday that Banner had suffered a torn ACL, creating an immediate void in the protection of Ben Roethlisberger.

After the Steelers secured a third-down stop on the first drive of the game, it appeared they would be set for their first offensive position. Then, immediate tragedy struck when Diontae Johnson muffed the 33-yard punt, giving the Giants the ball back, deep in Pittsburgh territory. Luckily, the Steelers defense came up big following the turnover, limiting the Giants to just three points.

Johnson appeared to have a hard time tracking the ball in an empty MetLife Stadium, timidly calling a fair catch while dropping to his knees to secure the ball on his next return attempt.