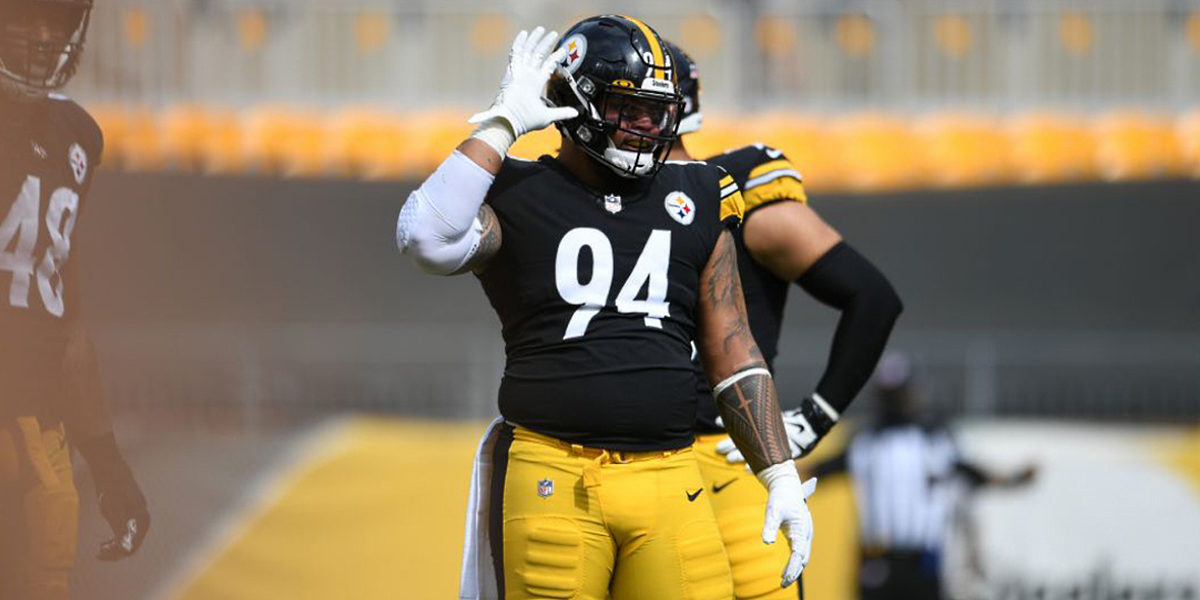 Steelers “Studs and Duds” Through Week 3 of the 2020 Season

It hasn’t been a perfect season for Ben Roethlisberger, but he’s played very well, especially for a 38-year-old quarterback coming off of a potentially career-threatening elbow injury.

“Big Ben” has completed 67 percent of his passes for 777 yards, 7 touchdowns, and only 1 interception on the season. Most importantly though, Roethlisberger has led the Steelers to their first 3-0 start since 2010.

While the Steelers haven’t had the most difficult schedule in the league, it’s hard to imagine this team going undefeated without Roethlisberger. He has made the offense a more potent unit and has absolutely elevated the team from where they were a year ago.

Bud Dupree is following up his impressive 2019 season with what could be a career year for the veteran edge defender.

He’s been a force for the Steelers’ run defense that so far has shut down Saquon Barkley, Melvin Gordon, and David Johnson, while only giving up a total of 162 yards on the ground this season.

Outside linebacker T.J. Watt is having another stellar season as an edge rusher for the Steelers, already racking up 10 quarterback hits, 3.5 sacks, 5 tackles for loss, 2 passes defensed, and 1 interception in just 3 games.

I don’t know what else you can say about T.J. Watt at this point in his career. He’s proven himself as one of the most dominant players in the league and brings consistency week in and week out for the Steelers.

It’s about time defensive end Tyson Alualu has gotten recognition for just how good of a season he’s having in 2020.

He’s a rotational lineman, playing in less than 50 percent of snaps on defense for the Steelers, but he looks just about the most dominant player on the defensive line, outside of Cameron Heyward, whenever he does get on the field.

At 33 years old, Alualu might be having his best season as a Steeler, and potentially one of the best seasons of his 11-year career. It’s crucial to have strong rotational defensive linemen in today’s NFL, and the Steelers have a great one this year in Tyson Alualu.

Cameron Heyward is once again showing that he’s one of the most dominant interior defensive linemen in the NFL.

His play hasn’t shown up on the stat sheet yet, but throw on some film from the Steelers’ games this season and you’ll find Cam bullying whoever he’s matched up against on the opposing offensive line.

He even recorded the first interception of his 10-year career. And it was an important interception at that, ending a 9-minute drive for the Giants and keeping them off the scoreboard.

After a disappointing, injury-riddled 2019 season, wide receiver Juju Smith-Schuster needed to have a bounce-back year in 2020 with “Big Ben” coming back.

So far he’s been arguably the most consistent player on offense, catching 17 passes for 160 yards and 3 touchdowns.

He’s also been extremely physical as a blocker and shown the effort to fight for extra yards whenever he’s gotten the ball. He’s made a few heads-up plays as well that have saved the team from costly mistakes, such as diving into a pile of Giants’ defensive players to recover a Benny Snell fumble that could have cost the Steelers the game in Week 1.

Second-year receiver Diontae Johnson is more or less having the breakout season that Steelers fans expected from him in 2020.

While he fumbled the ball on the Steelers’ first punt return of the season, and nearly fumbled on at least two other occasions, he’s been an electric play-maker, forcing missed tackles and making plays in open space both as a receiver and punt returner.

Overall, Johnson has 14 receptions for 149 yards and 1 touchdown, but there’s a good chance that he would be leading the team in yards and receptions right now had he not gone down to a concussion midway through the game against the Texans.

It hasn’t been a dominant season for the Steelers’ pass defense so far, at least compared to last year, but cornerback Mike Hilton has made plays all over the field for the secondary in 2020.

He continues to excel as a blitzer, picking up 2 sacks on the year and applying pressure on the quarterback in every game.

He’s also leading the team in tackles with 19 and has been stuffing screen plays and short passes for minimal gains all season.

The Right Side of the Offensive Line

No position on the team has faced more adversity this season than the right guard and right tackle spots on the offensive line. But the Steelers’ depth pieces have really risen to the occasion.

With guards David DeCastro and Stefen Wisniewski, both unavailable for the Steelers in week 2, rookie 4th-round pick Kevin Dotson filled in at right guard and played a phenomenal game against the Broncos.

Zach Banner, who won the right tackle job in training camp, looked to have a solid season in his first year starting, but he, unfortunately, suffered a torn ACL in week 1. That afforded third-year tackle Chukwuma Okorafor an opportunity to showcase himself, and he has proven to be a starting-caliber player in the league so far this year, performing far better than expected against J.J. Watt in week 3.

Expectations were fairly high for second-year running back Benny Snell coming out of training camp, and to be fair, he did fill in admirably for James Conner in Week 1, rushing for 113 yards on 19 carries against the Giants.

But he’s already had 2 nearly catastrophic 4th-quarter fumbles that could have potentially lost the game for the Steelers in Weeks 1 and 2.

He also didn’t play well in the limited opportunities he had against the Broncos and Texans, rushing for only 16 yards on 10 carries in those games.

It’s a good season when the only player on the team who has consistently struggled is the backup running back. And there’s no reason to believe that Snell won’t bounce back as the year goes on.