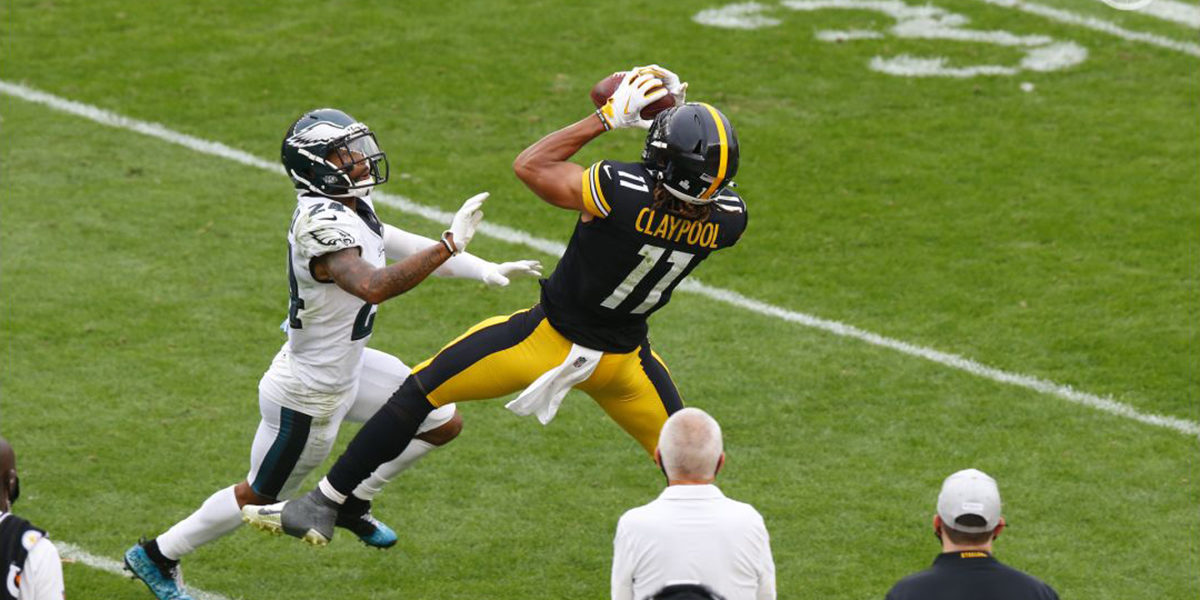 Steelers “Studs and Duds” from week 5 against the Eagles

Sunday’s 38-29 win over the Philadelphia Eagles was a breakout game for the rookie wide receiver, Chase Claypool.

After Diontae Johnson went down to a back injury early in the game, Claypool took full advantage of the opportunity, catching 7 passes for 110 yards, and 3 touchdowns, adding a 4th touchdown on the ground as well.

Claypool converted several 3rd downs and put the game away for the Steelers late in the 4th quarter on a 35-yard touchdown reception. With Pittsburgh barely holding on to a dangerous 2 point lead, Claypool’s touchdown was much needed and virtually put the game out of reach for Philadelphia.

“Big Ben” had a solid game for the Steelers, completing 27 of 34 passes for 239 yards, 3 touchdowns, and 0 interceptions.

The Steelers’ defense struggled at times to contain Philadelphia’s offense, but Roethlisberger kept pace and Pittsburgh never trailed at any point in the game.

He didn’t make many flashy or spectacular plays in this game, but he executed flawlessly, propelling the Steelers to a win and their first 4-0 start since 1979.

There weren’t a lot of standout performances this week, especially on the defensive side of the ball, but Stephon Tuitt had arguably his best game of the season so far, picking up 1.5 sacks and a tackle for loss.

Tuitt’s best play of the game, however, was a crucial sack late in the 4th quarter that likely prevented Carson Wentz from throwing a touchdown pass that would’ve given the Eagles the lead with 4 minutes left.

Cornerback Joe Haden was nearly flawless in coverage against the Eagles today, in an otherwise underwhelming performance from the Steelers’ secondary.

Outside of a questionable pass interference call in the 3rd quarter, you would have to really scour the game film to find a play given up by Haden.

Unlike Haden, it was a long day in coverage for cornerbacks Steven Nelson and Mike Hilton.

Nelson had 2 interceptions in the game, and Hilton had 8 tackles and a sack, but the two struggled all game to cover the Eagles’ patchwork receiving corps.

The Steelers’ pass defense as a whole will be tested in the coming weeks against much stronger competition, and hopefully, for Steelers fans, they’re able to bounce back.

James Conner made a few plays against the Eagles’ formidable defensive line, but overall, the team struggled to run the ball all game.

Conner, Benny Snell, and Anthony McFarland combined for 25 carries and 69 rushing yards, averaging an underwhelming 2.7 yards per play on the ground.

It’s telling that the biggest play on the ground for the Steelers was an end-around up the sideline by wide receiver Ray Ray McCloud.