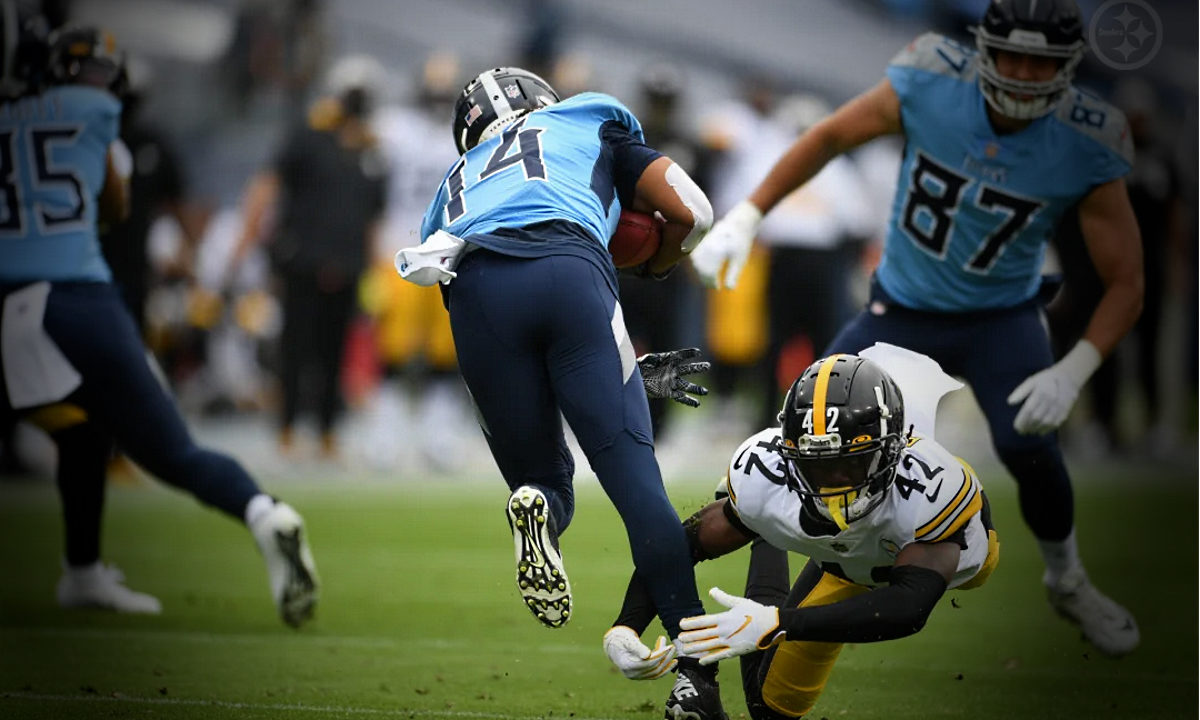 The Pittsburgh Steelers have long had the mantra of “the standard is the standard” but they haven’t always had players on their depth chart on defense nearly as prepared to take on starting roles, or maintain the level of intensity of ‘starters’, as they have during this 2020 NFL regular season. From Robert Spillane to Ulysees Gilbert to Cameron Sutton to Alex Highsmith, the Steelers have shown that they have drilled exceptional play into their entire squad. And that high level of readiness has paid dividends as the Steelers look to an AFC North battle with the Baltimore Ravens in Week 8.

Spillane, who many fans were concerned would not be up to the task of replacing injured inside linebacker Devin Bush, shut down many doubters, especially when he went full speed to burst through the line and stop Derrick Henry of the Tennessee Titans. Spillane’s play illustrated, on Sunday, that he was ready to play a big game and maintain the level of intensity and winning ball the Steelers defense has shown through seven weeks.

“We said prior to this performance, we weren’t concerned about the quality of his play,” Mike Tomlin said about Spillane following the game. “We supplemented him on possession downs with Ulysees Gilbert who also did a really solid job. Together they were able to stand in for Devin [Bush].”

Henry Mondeaux, Highsmith, James Pierre, and Justin Layne also spelled other defenders throughout the game, getting snaps under their breath in a game that had a lot at stake. “We played the defenses that we normally play,” Tomlin said this week. “We desire to play better, obviously, but I’m thankful we have enough competitive spirit, that we believe in each other enough, that we have enough guys who want to be the reason why we’re successful, that we can make enough plays to persevere sometimes in the midst of adversity, and sometimes in the midst of adversity that we create.”

Sutton, who had an interception against the Cleveland Browns, was once again a factor in the game against the Titans. Sutton, listed as a cornerback, has been asked to play a hybrid role in the defensive backfield. He has embraced what has been asked of him and was around the ball a lot last Sunday. He had two passes defensed against Ryan Tannehill and four solo tackles. Despite playing in just four games this season, a drop in playing time from his 16 games in 2019, Sutton has maintained the starter mentality and played a big role on special teams as well.

The fact that guys many consider ‘backups’ or depth players were able to step in and help limit the Titans to just one offensive yard in the first quarter of the game against the Titans is incredible.

“We have a commitment there,” Tomlin said on Tuesday. “If (opponents) can’t score, you can’t lose… That commitment goes back to player acquisitions, the development of schematics, just the nuts and bolts things when you build your program. I just think good, winning, consistent football, top-notch defense, particularly defense that is stout against the run, is a significant component of that.”

There is no doubt that the emphasis on preparation has paid off for the Steelers defense. With a big matchup again this coming weekend, they’ll need to rely on the mix of veterans and younger players to come out with a win over the Ravens. While Pittsburgh has always had a tradition of fielding strong defenses, they haven’t always benefitted from actually having an all-around stout ‘D’ from starters on down to the last guy on the depth chart. Call them ‘Blitzburgh’ or ‘Steel Hurtin’, whatever gets you excited as a fan, this season’s Steelers defense is legitimate through and through.