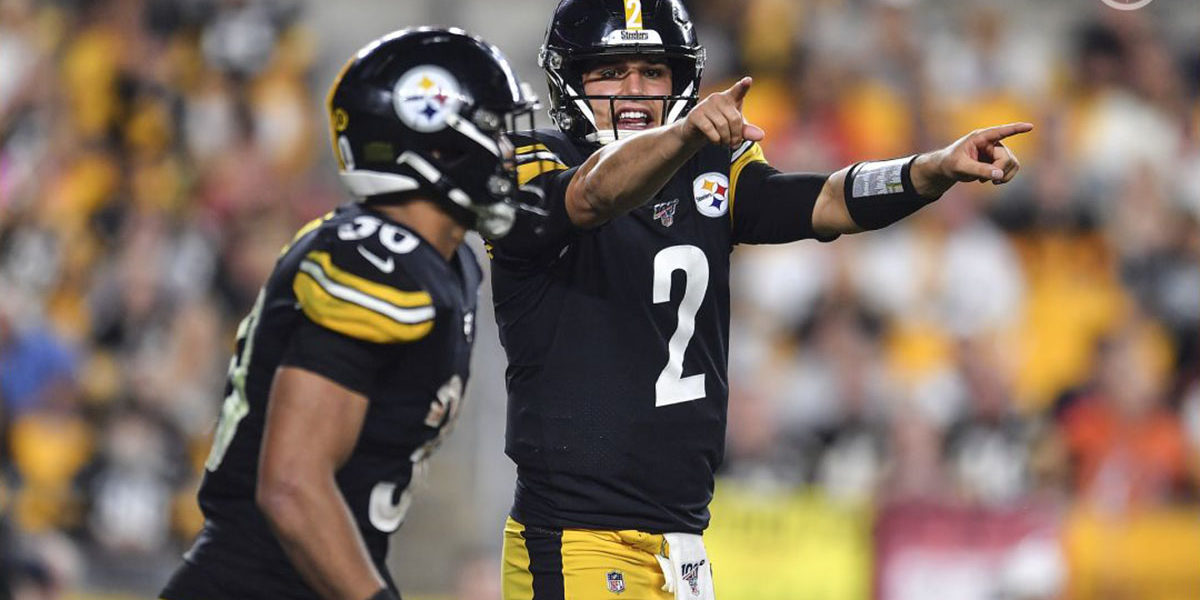 Why are Steelers fans so fickle about the quarterback position?

I must’ve heard it all this offseason. Steelers fans were already sending Ben Roethlisberger out to pasture. Some fans wanted to select Oklahoma quarterback Jalen Hurts in the draft. Some wanted to sign Cam Newton or Jameis Winston as a backup.

This week we learned a lot about those thoughts. Hurts isn’t a starting NFL quarterback, at least not yet. Cam Newton is pretty much not that answer in New England and Winston saw a few snaps in his new team’s blowout of the Buccaneers.

We also found out that Ben Roethlisberger took a pretty nasty shot, which may have hurt one or both of his knees – and on top of that, his close contact with TE Vance McDonald, who tested positive for COVID-19 on Monday, has placed the Steelers starting QB on the reserve list.

Speculation was already running rampant about the Jets benching Sam Darnold and how the Steelers should trade for him – one of many solutions being floated in a short week where Big Ben could still play on Sunday against the Bengals.

But if he doesn’t, fans have seemingly jumped the shark past Roethlisberger’s backup, Mason Rudolph, who played a select few snaps in Dallas last weekend. The fans have incorrectly labeled the Steelers lack of success in 2019 on Rudolph, and not one of the other quarterbacks they feel should start this Sunday if Big Ben can’t go: Devlin Hodges.

A big yikes there folks.

I thought I’ve seen it all, but some fans are apparently unaware that Hodges is on the practice squad – he could be called up due to changes in roster rules for 2020, but it’s highly unlikely he would leapfrog Rudolph or third-string signal caller Joshua Dobbs… though I’m seeing calls for Dobbs to start as well.

Dobbs, who rejoined the team after being cut by the Jacksonville Jaguars before the season started, lost a backup battle to Rudolph in 2019. The Steelers felt so confident in Hodges as a third option that Dobbs was even expendable: sent to the Jaguars for a (generous) fifth-round pick.

Yet, I’m seeing Steelers fans who believe Rudolph lost his job. It baffles me the thought process.

Rudolph was one of several quarterbacks that was on every draft geek’s radar to go to Pittsburgh in the 2018 NFL Draft. Five other quarterbacks were selected in the first round, with Rudolph being the next selected, but falling into the third – where the Steelers felt they stole a pick, having a first-round grade on the Oklahoma State product.

Rudolph sat and learned his rookie season, but won the backup job over Dobbs in 2019’s preseason when the latter looked indecisive and couldn’t string together the types of drives that won him a roster spot over Landry Jones a season earlier.

Dobbs was sent packing, Roethlisberger burned out his elbow, and Rudolph would become the starter – but he first “lost his job” due to a late helmet-to-helmet hit by Ravens safety Earl Thomas in Week 5. Rudolph spent time in the concussion protocol, then looked a lot timider upon his return.

And rightfully so, right? I mean, he had his head taken off… and the Steelers were also reeling from other injuries, including losing their top wide receiver (JuJu Smith-Schuster) and running back (James Conner) during that span of time.

Both would return to try and help Rudolph win on a short week on the road for a Thursday Night Football game against the Browns – both would leave the game, as would Diontae Johnson, as Rudolph had his worst game as a pro, throwing four interceptions and famously getting his head bashed in by Browns DE Myles Garrett.

He would then be benched the following week during an anemic first half display against the Bengals. Hodges, who came in for him, didn’t fare much better, but Pittsburgh eked out a victory after a long Hodges to James Washington touchdown connection.

Hodges wouldn’t last long as a starter either, and would eventually be benched against the Jets in Week 16, as the Steelers playoff hopes went up in flames. Rudolph entered that game and completed 70% of his passes before heading to the sidelines with a broken collarbone, ending his season.

The hate for Rudolph doesn’t necessarily make sense to me. Hodges has a cool nickname but also threw 5:8 touchdowns to interceptions to Rudolph’s 13:9, which keep in mind, 4 of those Rudolph picks all came in one game (Cleveland).

I understand that the offense hasn’t looked terrific at times, and especially so last year. However, why do fans expect Joshua Dobbs to have done better after looking subpar last preseason and getting released by Jacksonville?

Also, why do some fans not realize that Paxton Lynch, a former first round pick who was cut by three different teams, is no longer on the Steelers roster? (Or anyone else’s for that matter?)

Why are we hitting the panic button for a game several days away where Big Ben could still play?

And if they needed to play a backup, why is Rudolph such an awful option?

I think fans are enamored with falsehoods about how good previous Steelers backups were. Whenever the Steelers have lost to a division rival, such as the Browns or Ravens, it was often without Roethlisberger – and usually with Charlie Batch or Byron Leftwich.

Yes, both of those quarterbacks had NFL experience… which is a polite way of saying they failed somewhere else and were not thought highly enough to be a starter anywhere else in the league. Hence, why they were backups in Pittsburgh.

Batch is a prime example of being propped up by a great defense – which isn’t necessarily a bad thing. So why can’t fans see the forest for the trees here too?

If the team has to ride with a backup for the next week or two, it’s not the worst-case scenario. In 2010, the Steelers were without Roethlisberger for the first four games of the season, and still made it to the Super Bowl. They won other games with Charlie Batch, revered as a backup despite lackluster stats, as well as Landry Jones.

The Steelers next two games are against an improving, but still division basement dwelling Cincinnati Bengals team at home, and a one-win Jaguars team at Jacksonville.

This isn’t the thick of their schedule, which in my opinion, is already behind them. No, these are games that are winnable even if you placed the 2019 offense on the field – which the Steelers wouldn’t be doing either, as Smith-Schuster, Conner, and Johnson are all healthy, as is the entire offensive line. (Not to mention they’ve also added Chase Claypool and Eric Ebron as playmaking threats.)

Therefore, all of the hoopla over trading for, drafting, or otherwise acquiring a quarterback needs to stop. We all realize that Ben Roethlisberger isn’t a 20-something-year-old anymore. There’s no reason to believe he’s slowing down either.

All of us were aware of the potential COVID risks to the roster this season. Yes, it sucks at a time when the Steelers are 8-0, but how about giving the team a chance before digging some of the current backup quarterbacks a hole and pouring dirt on them?

2019 should not be what defines any of the players who went through that 8-8 season. Even if some felt the quarterback play wasn’t up to snuff, somehow Diontae Johnson and James Washington both emerged as offensive weapons. That doesn’t happen if the passers are as bad as everyone makes them out to be.

On the flipside, they’re not the next Big Ben either. Nor was Charlie Batch, but he was serviceable and able to aide team victories as necessary. That should be the expectation of Mason Rudolph as well.

All I’m asking is that Steelers Nation gives this guy a chance before declaring him dead on arrival.