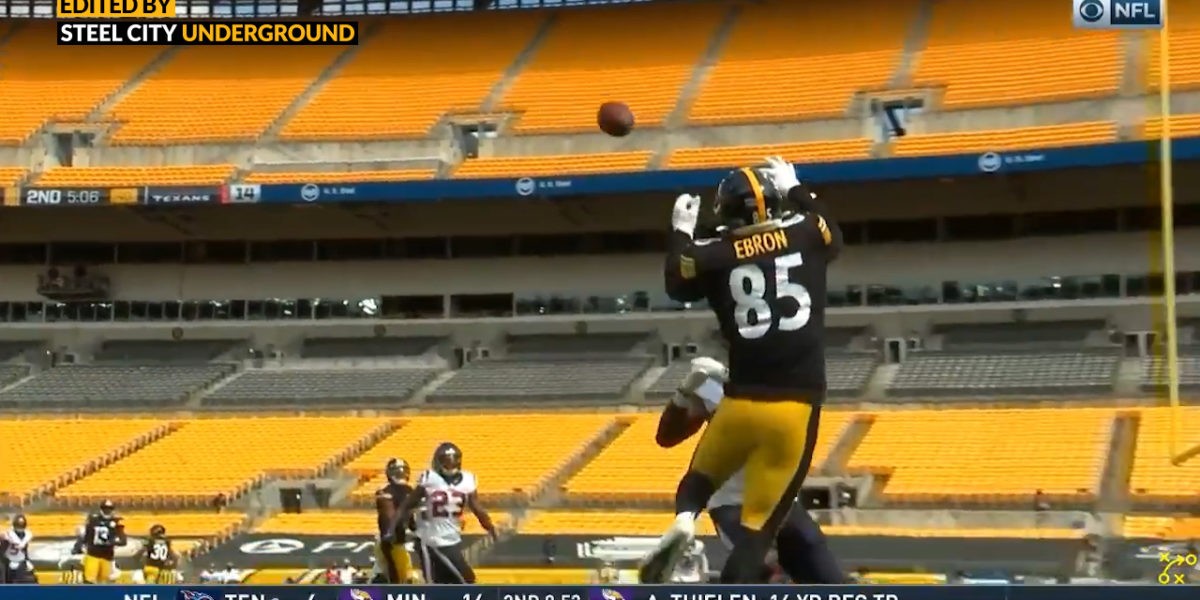 Plays of the Year: Eric Ebron elevates for first TD with the Steelers

With the Pittsburgh Steelers hosting the Houston Texans in Week 3 of the 2020 NFL regular season, there was anticipation that it was going to be a battle between the two teams; and a showdown between Ben Roethlisberger and Deshaun Watson.

Roethlisberger had moments through the first three weeks of play – since returning from a serious elbow injury where he has looked rusty, or off by a beat here and there when targeting receivers.

Big Ben shook a lot of that off when the offense began utilizing the tight ends more, especially Eric Ebron.

Watson had the Texans moving the ball well on their second offensive drive. Houston moved the ball 54 yards on nine plays thanks to a 31-yard catch and then an end-zone scamper by David Johnson to put the Texans ahead, 14-3, with 11:32 left in the first half of the game.

When Roethlisberger and the offense took the field, it was rookie Anthony McFarland that got things started off on the right foot and Ebron who ended the drive, putting the Steelers within four points of the visiting team. McFarland’s 20-yard run was followed up by a 15-yard reception by tight end Vance McDonald who fought to stay upright and earn an extra yard or two. After Benny Snell was able to convert a third-and-1, Roethlisberger targeted Ebron for 17-yards.

Ebron showed his athleticism and physicality by going over the top of a Texans defender to grab a high-point pass for a key touchdown.

Under pressure, Roethlisberger chose to throw the next pass out of the end zone, drawing an intentional grounding penalty that could have gotten into the veteran quarterback’s head but he shook it off and went right back to the play, hooking up with Ebron.

Ebron showed his athleticism and physicality by going over the top of a Texans defender to grab a high-point pass for a key touchdown. The veteran tight end was physical and able to go over the top of defender A.J. Moore, grabbing his first touchdown in a Steelers jersey.

Comparisons to Big Ben’s relationship with former long-time teammate Heath Miller were made by analysts during the game but he isn’t at that level with Ebron just yet (although they were admittedly working together on making connections and building a level of trust.)

Ebron had four catches heading into the game and walked away from this one with his best effort to date, with five receptions against the Texans for 52 yards.

The Steelers would climb to 3-0 on the season with a 28-21 victory… before everything would start to unfold over the next week with COVID-19 and the Tennessee Titans.