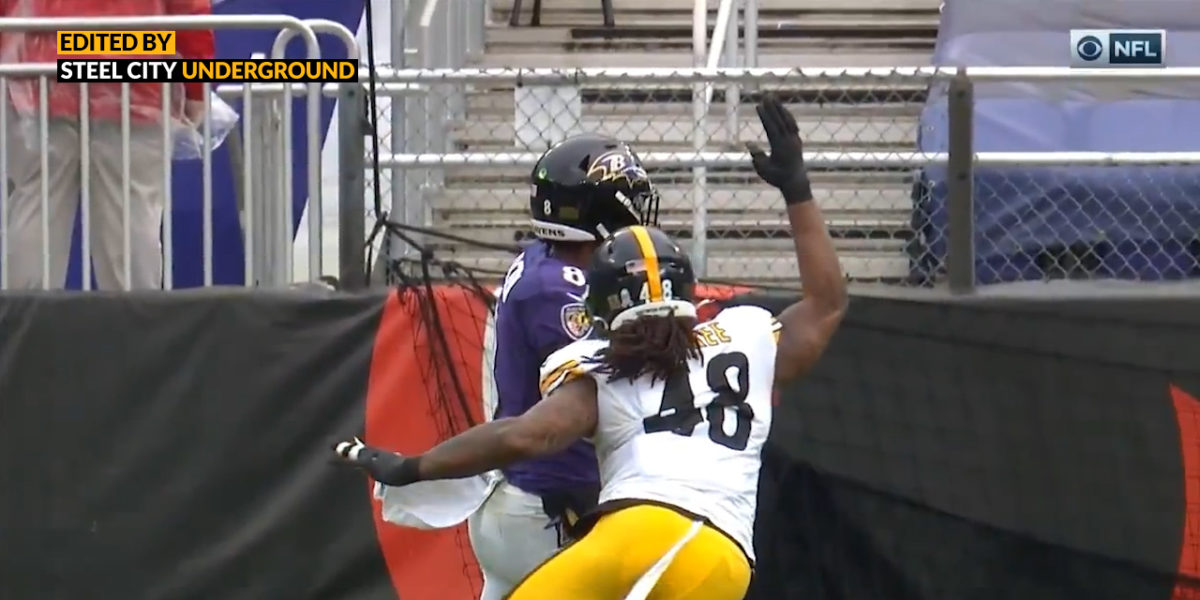 Plays of the Year: Bud Dupree strips Lamar Jackson in the red zone

The divisional rivalry between the Pittsburgh Steelers and Baltimore Ravens in Week 8 was a back-and-forth affair that required both teams to recover from foolish penalties, turnovers, and occasional big plays from their opponents.

Late in the first quarter, the Steelers experienced both a low moment and a high moment within just six plays.

On a first-and-ten play from Pittsburgh’s own 30-yard line, Ben Roethlisberger thought he had rookie receiver Chase Claypool on a quick slant pass. Unfortunately, Ravens defender Marcus Peters was able to strip the ball and Baltimore recovered the fumble at the Steelers’ 44-yard line.

Just five plays later, Lamar Jackson and the Ravens offense were in the red zone and threatening. On second-and-goal from the eight-yard line, Jackson was looking for an opportunity to hit an open target in the end zone. Unfortunately for Jackson, Bud Dupree, who was lined up more to the middle behind the defensive line, shot the gap and applied pressure.

Either Jackson didn’t see him or he didn’t feel him quickly enough to know to get rid of the ball. Dupree was relentless and hit Jackson’s arm, knocking the ball loose, before it could be considered a pass. The ball bounced to the turf where Vince Williams was able to recover it at the Steelers’ four-yard line.

Unfortunately, the Steelers weren’t able to capitalize on the turnover offensively.

The play did, however, keep the Ravens from putting an easy seven points on the scoreboard and showed the creativity this Steelers defense has had in playing opponents during 2020 NFL regular season. Pittsburgh would go on to win the game 28-24, with this play making all of the difference as they remained, a the time, the only unbeaten team in the league at 7-0.