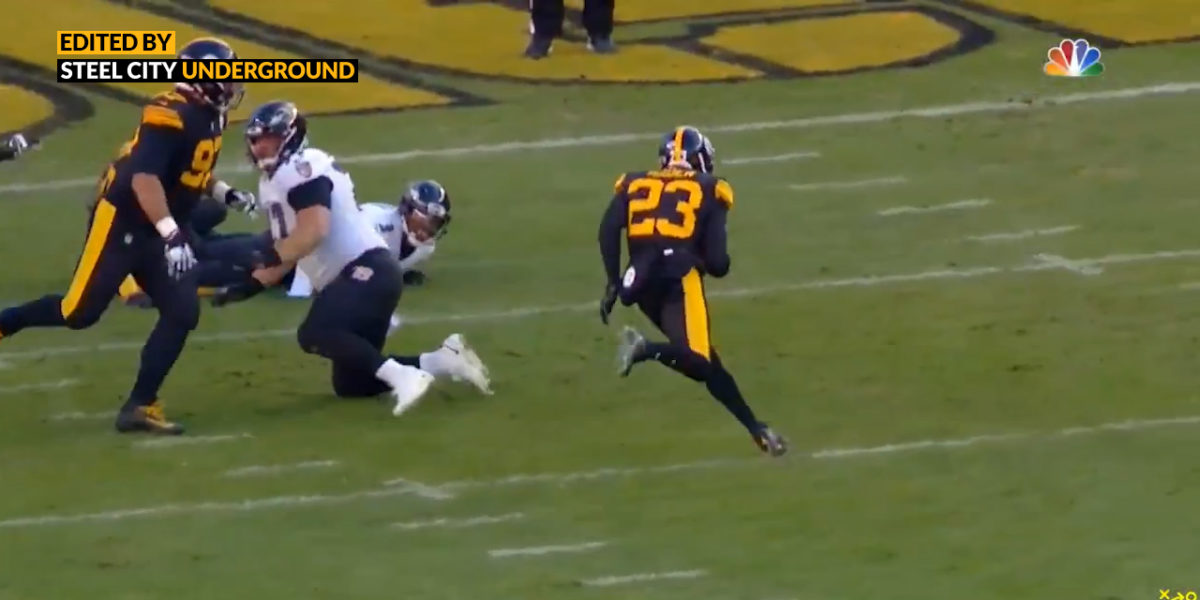 Plays of the Year: Joe Haden’s first pick-six as a Pittsburgh Steeler

It took forever, but the Steelers and Ravens oft-postponed game originally scheduled for Thanksgiving evening was played on a Wednesday afternoon. The meeting between the AFC North rivals once again got off to a slow start offensively as both teams got very little traction in their opening possessions.

Robert Griffin III fumbled a snap that was recovered by Vince Williams but the Steelers missed an opportunity to take an early lead after the takeaway when they were unable to punch the ball into the end zone on fourth-and-one; Tyus Bowser grabbed an easy interception. Early on, this game was as ugly as the carcass leftover from Thanksgiving dinner. An unlikely hero, however, stepped up to change the momentum for Pittsburgh.

Since joining the Steelers in 2017, Joe Haden has been the type of player in the defensive backfield that quietly does his job, week-in, and week-out. He’s logged one sack, 46 pass defenses, and ten interceptions during that time frame.

In this game, Haden grabbed his first interception for a touchdown as a member of the Black and Gold and his second career pick-six.

Griffin III had the Ravens offense lined up, facing a third-and-four from their own 12-yard line in the possession after Bowser’s pick of Ben Roethlisberger. Haden, who was lined up on the wideout, kept his eyes on the play. He saw James Proche break underneath and simply jumped the route.

There was nothing but daylight for Haden after that as he returned the ball 14 yards for a touchdown. Although Chris Boswell missed the PAT, the Steelers went ahead, 6-0, with close to half of the first quarter left to play.

The pick-six would propel the Steelers to a 19-14 win, as they would improve to 11-0: the last game of their winning streak.

As history would show, while this play was memorable, the way this game was dragged out (as part of the longest week ever in NFL history) would strain the team headed into the December stretch towards the playoffs.